Aggressive at the start, offense faded vs AZ. Same thing vs. 49ers on the final drive Dec. 30. With a bad defense in the NFC West, Seahawks have no choice but to go full blast. 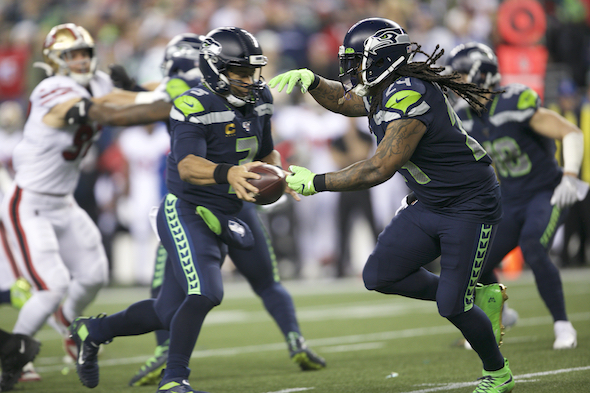 In his 2019 return to the Seahawks, Marshawn Lynch gained 34 yards in 12 carries against San Francisco Dec. 30, but was not on the field for the final drive that was stopped. / Drew McKenzie, Sportspress Northwest

Quick, and without looking, can you name the Seahawks’ starting running back from the last time they played the San Francisco 49ers? It was only 10 months ago.

Marshawn Lynch? Wrong. He played, but he didn’t start.

If you said Travis Homer, you and he are likely the only two to recall it. But at least the two of you figure to be cool with a similar mystery unfolding for the Sunday rematch at the Clink.

On Dec. 30, 2019, the Seahawks, because of injuries, were without running backs Chris Carson, Rashaad Penny and C.J. Prosise. Next man up was Homer, a rookie from Miami who did well in his first career start, with 62 rushing yards in 10 carries, plus another 30 on five receptions.

Penny is nearing a return from ACL surgery but is not on the active roster. Carson, Homer and Carlos Hyde sustained varying degrees of hurt Sunday in the loss at Arizona.  They all missed practices Wednesday and Thursday, so the decision on a starter may not be made until game time.

If none can go, next man up is another rookie from Miami, DeeJay Dallas, who in his short pro career has two rushes for eight yards and four catches for 33 yards. Not exactly a robust resume for a game against the notorious adversary.

But for the young, it does not matter. Asked Thursday for his take on a potential lead role, Dallas offered an original perspective.

The fanciful ferocity will be useful because the Seahawks against the Cardinals had an outcome that was double bad for the locals.

Beyond the obvious L to a division rival, the nature of the defeat fully exposed a defense so vulnerable that even Russell Wilson, the late-game Zen master, couldn’t overcome its futility with a game-saving miracle.

For Wilson and the offense, there is no slack, especially in division games when each side knows the other so well.

Within the division back to last season, the Seahawks have lost four in a row.

Sunday’s second-half fizzle — Seattle’s only score was a touchdown drive of 45 yards that took 12 plays, and the final three possessions totaled 46 yards  — was an example of how familiarity can breed narrow defeat.

“We had all kinds of chances to win the football game,” Carroll said after the 37-34 overtime loss. “We could have won it on offense couple times, and defense a couple times, and in overtime as well. We weren’t able to get the finish that we needed.”

Arizona finished. The Cardinals weren’t afraid of Wilson, who rung up a 27-point first half.

Against San Francisco Dec. 30, the Seahawks also fizzled late. The stakes were greater: The winner of the final regular season game would get the NFC’s No. 1 seed and a bye in the first round of the playoffs. The loser would get the fifth seed and a flight to Philadelphia.

You probably recall that the Niners won, 26-21, when TE Jacob Hollister was denied the game-winning touchdown by about the width of a baby’s eyelash.

What may be forgotten is that in the final minute, the Seahawks, one of the best teams in recent NFL history dealing fourth-quarter comebacks, had the ball for eight plays from first-and-10 at the SF 12-yard line. The Niners weren’t afraid of Wilson either.

Only rivals can slip the shiv so diabolically.

“To me, it was a perfect way to win a championship,” Carroll said afterward. “Unfortunately, it just came up short by a couple inches.”

The Seahawks defense, mediocre when it gave up 398 yards to the Niners, cannot be trusted right now. Sunday, they likely will be without SS Jamal Adams (groin), CB Shaquill Griffin (concussion) and maybe CB Ugo Amadi (hamstring, illness). Newcomer DE Carlos Dunlap won’t be out of covid-19 protocol.

No pity will be forthcoming from the 49ers, who early on lost top-end D-linemen Nick Bosa and Solomon Thomas for the season. Stalwarts Dee Ford and Richard Sherman are also out. Despite the health bleakness, SF is fifth in the NFL in yards allowed (309.6) and points allowed (19.4), which included Sunday handing coach Bill Belichick his worst home loss in 20 years in New England, 33-6.

But because the Seattle defense is semi-helpless, the Seahawks’ only choice is for Wilson to go directly into the grills of the 49ers. As Seattle did on the first drive against Arizona.

Lost in the late-game dissolution was that the first drive may have been Wilson’s best opener. It seemed to be the most aggressive. And a big contrast with the game’s final three possessions.

What about that opening bomb, speared one-handed by Lockett?

“For me, I like to be aggressive throughout the game,” Wilson said Thursday. “That play in particular, I wanted to give him a chance. We had other great routes coming across the field as well. But it just kind of flashed in my eyes. A lot of it’s just instincts.

Instincts, flashes, whatever. Wilson has the weapons, and he’s the best gunslinger in the NFL. Fercripesakes, Lockett had 15 catches for 200 yards.

So it was a surprise to see the offense fade against Arizona, although the Cardinals defense is becoming a serious outfit. Play-calling aggression is the minimum weekly requirement for a team with an unreliable defense, even if there’s a rookie at running back.

With the addition of the extra wild-card playoff spot, it’s possible, though unlikely, that all the NFC West teams could make the postseason.  So that means six regular-season games that are playoff-like.