Thiel: For Carroll, Election Day is another thing

As the world awaits the outcome of the presidential election Tuesday, Pete Carroll is prepping to answer questions from players Wednesday. Even then, it’s not over ’til it’s over. 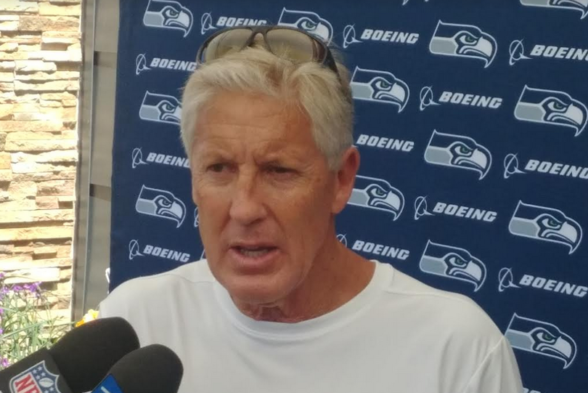 Pete Carroll keeps up with the world on four TV monitors in his office. / Art Thiel, Sportspress Northwwst

Working in the sports world on potentially the wildest Election Day in American history is a bit like running a second-floor church above a bar having a massive brawl. Not supposed to take a side, but everyone has a stake in keeping the building from burning down.

The NFL is in full operation Tuesday, but it is, conveniently, the players’ off-day, so some of them may watch the drama on TV. Or they may try to ignore it. Seahawks coach Pete Carroll figures to be in his office, where he said Monday he often has four TV monitors on at once.

And I thought I was an information junkie.

“All different loads of information coming in, which I kind of like it like that,” he said via Zoom, wearing a “Coach the Vote” T-shirt. “So it’ll be the same as always. I always have stuff going on the background. I like to see the different variety of opinions to come out of the different networks. That’s the constant for me.”

What he and the rest of us may learn Tuesday is that the presidential election won’t be decided before we go to bed. Which is hardly unusual, according to presidential historian Michael Beschloss:

If there is not a decisive outcome by Wednesday morning, when practice begins for the Seahawks game at Buffalo Sunday, Carroll said he’ll have a discussion with players during team meetings.

“It’s not a big deal for us to bring up the topic because we’ve been on it the whole time,” said Carroll, who has been active locally and nationally in the get-out-the-vote campaign. “We’ve been on the on the topic of voting, just kind of keeping it alive. I mentioned all the time to start meetings, how many days you have left to do it; what have you done lately; will you call and how far along are you in your process.”

Carroll said events will dictate the course of any discussion Wednesday.

“I’ll just go with the flow of whatever’s happening,” he said. “We’re all waiting to to figure out what’s gonna happen by Wednesday morning, then we’ll see.

“Certainly it will be topical, and if there’s something to talk about, we’ll deal with it at this time. Nobody knows what’s gonna happen, and it sounds like that nothing will happen to be definitive. But who knows? We’ll see, so we’re gonna stay on it. Any questions, we’ll talk talk about it, then we’ll move forward.”

Moving forward is, of course, the trick. President Trump already has said if he is trailing he likely will contest the results, despite offering no immediate evidence of voter fraud.

The prospect of a court fight and the anxiety of uncertainty, coupled with the growing fear of civil unrest, would be a distraction to millions of Americans, including players on the only two in-season sports leagues, NFL and MLS — as if they didn’t have enough to deal with regarding compliance with covid-19 restrictions.

Asked whether he was concerned about distractions if things drag on much past Tuesday, Carroll said, “At this point, no.”

The low-key answer is about all that could be said Monday. The reveal about a turning point in U.S. and global history begins Tuesday night.

The election is important on sports fronts besides personal politics and the conduct of a coronavirus policy that has damaged many lives and the livings of the sports leagues.

A number of issues that impact the sports industry are explained here in a Sportico story that assesses the policy differences between the Trump administration and a potential Biden administration.

As much effort as the sports teams have put into encouraging voting, the long-anticipated arrival of Election Day as a conclusion to tension and despair may be closer to halftime.