Newly acquired DE Carlos Dunlap will start with newly healed SS Jamal Adams in Buffalo. After three good quarters vs. the 49ers, Seahawks defense may restore a bit of dignity. 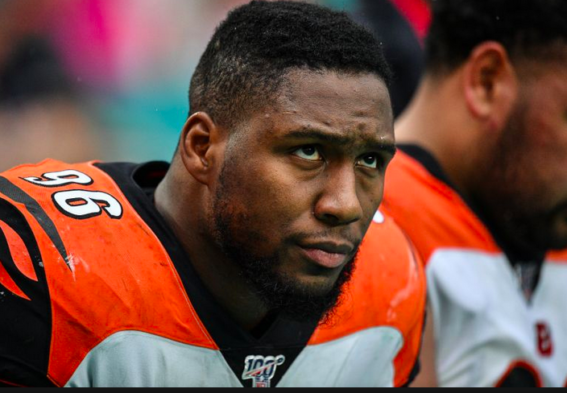 Now the Seahawks are getting somewhere. They have hired a writer to play defensive end.

Speaking on behalf of my fellow crafters, I am convinced our skills are shamefully overlooked. We are never asked to rush the quarterback for handsome compensation. I guarantee some of us can do it, particularly with the Seahawks.

I mean, how hard is it to be last in the NFL in defense? I know we can do that.

So it is gratifying to welcome a Bard of Ball, Carlos Dunlap, to Seattle. In his first Zoom presser Wednesday after his trade last week from the Cincinnati Bengals to help Seattle’s pass rush, he explained his literary ambitions regarding his new chapter in Seattle.

“I have full confidence in grabbing the pen and writing it exactly the way that I want to,” he said, “and looking forward to this first start on Sunday of putting those first words in the first paragraph down.

“The Seahawks have given me a golden pen.”

Well then. Let’s get this literary lion in the pressbox at Bills Stadium in Orchard Park, N.Y., Sunday (10 a.m., FOX), and get me a game check for one rush on Buffalo QB Josh Allen.

The Seahawks probably will come up with some lame excuse that I’m disqualified because I haven’t had 28 swabs shoved into my cranium lately, thus thwarting the opportunity for the best sack of my nascent alt-career.

Then again, I wouldn’t have agreed to risk losing $3 million in salary to play for the Seahawks, as Dunlap did. I’d risk $1 million, tops.

Dunlap’s first Seattle practice Wednesday was preceded by multiple news reports that as part of the deal, he agreed to cut his salary owed for the balance of this season from $4.59 million to $2 million. In exchange, he would get a bonus of $3 million if he is on the Seahawks roster on the fifth day of the 2021 league year, which begins the final season of his inherited contract that calls for a non-guaranteed $11 million.

If Dunlap flops and is cast aside before next season, he’s out some serious coin, forcing him to become more reliant on his writing career. He’s willing to risk it.

“I have full confidence and faith in betting on myself,’’ he said. “Who else to have a better bet with? it was like a win-win situation at this point my career.”

For the Seahawks, pushing some salary to next season gets them out of trouble with the 2020 salary cap. The Dunlap trade, which included sending little-used C B.J. Finney and his $4 million salary to the Bengals, left the Seahawks temporarily over the cap by $1.4 million, according to tracking by the players union.

The deal also gets Dunlap, 31, out of Cincinnati, where a coaching change a year ago and a roster makeover left him on the bench for the past three games of a 2-5-1 season,  continuing a franchise futility that borders on the epic.

The Bengals, who drafted Dunlap out of Florida in the second round (54th pick) of the 2010 draft, have not been to the playoffs since 2015, and have been to the postseason seven times in 29 years, winning zero games. Their last playoff win came in 1990, shortly after the fall of the Berlin Wall.

So you might imagine his state of mind coming to a team that has been to the playoffs nine of the past 10 years and, at 6-1, leads the NFC.

“I’m excited and fired up to be on the other side,” he said. “All the banners that they got up in here, they’re used to being in the big games, and being on a better side of the big games. I want to compete with those guys and help them win those big games.”

One game that’s fairly cherubic in 2020 comes Sunday with the 6-2 Bills. Dunlap is expected to be joined in the starting lineup by SS Jamal Adams, who will see his first game action in a month after healing from a groin injury.

“He’s full go — I’m really excited to tell you that,” Carroll said. “He was close last week, couldn’t get him caught up. He’s ready to go, pumped, really looking forward to it.”

Carroll also expects the return of DE Rasheem Green (stinger). That means the defense, which had its best first three quarters of the season in the 37-27 win over the Niners, may be on the verge of some dignity.

With 12, the Seahawks are 24th in Dunlap’s specialty, sacks.

“The addition of Carlos also gives us a chance to take a step forward,” he said. “Nine or 10 years, whatever it was there, he’s really excited for the fresh start. He’s really upbeat. Has the big eyes looking around, wondering what’s going on.

Said Dunlap: “I just want to say that I’m revived, refreshed and I got an opportunity.”

And if it doesn’t work out, he’s got the golden pen to start a new career.

The Seahawks’ opponent last Sunday, the San Francisco 49ers, put four players on the reserve/COVID-19 list Wednesday and declared all four of them out for Thursday night’s home game against the Green Bay Packers. The club was forced to cancel practice and shut down the practice facility.

ESPN reported WR Kendrick Bourne was positive after a Tuesday test. Later the 49ers put LT Trent Williams and WRs Brandon Aiyuk and Deebo Samuel, the latter already on the injured list, on the virus list.

The Seahawks have had no reported cases, but the virus creeps closer, although the NFL has claimed none of the numerous positive tests around the league have occurred during games.

“We’re concerned, yeah, of course we are,” Carroll said. “We just played them. We are doing our homework with the timing of his exposure. All we can do right now is test and be aware of the connections.

“They’re working to understand what took place, what we should do next about playing a guy who tested positive on the day he tested. We have to find out exactly when that was. I don’t know that right now.”