Thiel: No sign yet of the diva gene in Metcalf

The feats of DK Metcalf are beginning to build a legend, even if he’s in only his second year. Pete Carroll found a comparison that will wake the echoes in Buffalo Sunday. 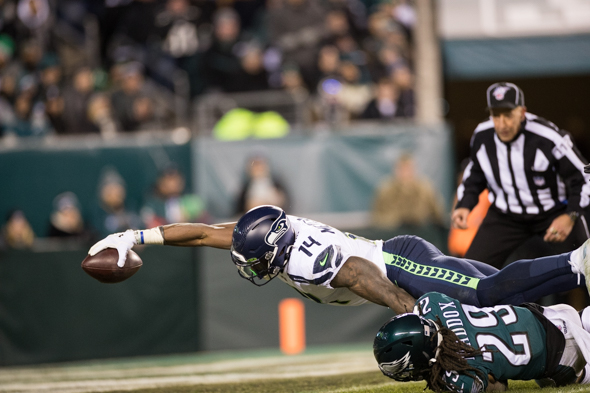 DK Metcalf stretches the ball into the end zone for a touchdown after a 53-yard reception against the Eagles in the Seahawks’ playoff win in Philadelphia in January. / Drew McKenzie, Sportspress Northwest

In contrast to many who have occupied his NFL position, such as Terrell Owens, Dez Bryant, Chad Johnson, Michael Irvin, Antonio Brown, Keyshawn Johnson and Randy Moss, Seahawks WR DK Metcalf is publicly self-effacing. He may need an ego transfusion from Odell Beckham Jr. just to ask a teammate to pass the cafeteria pepper.

“I don’t think I’ve done anything to be famous yet,” he said this week, responding to a question. “Never think you’re famous. Just come in every day working like I was a 64th pick, or maybe even a seventh-round pick. Not changing who I am because of the accolades that I’m receiving this year.

“That’s that’s one of my main goals: Never change, no matter how big, or if I fall off tomorrow.”

Whether the diva gene in Metcalf expresses itself remains to be seen. His career trajectory certainly suggests that its suppression will be tested.

After Metcalf’s 12-catch, 161-yard game against the 49ers, which was preceded by the soon-to-be-immortal Baker TD Taker against Arizona, Metcalf in his second season has become a certifiable national athletic phenom. The Bills in Buffalo Sunday (10 a.m. FOX) will be next to attempt to help keep him humble. 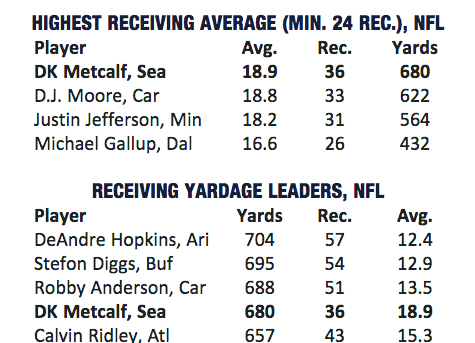 Metcalf leads the NFL in yardage per catch and is fourth in total yardage, which is remarkable considering he’s sharing Wilson’s lasers and rainbows with teammate Tyler Lockett. Apparently that’s how a team leads the NFL in points per game (34.8).

Even coach Pete Carroll was laying it on thick.

“He is going to develop into an extraordinary competitor, player, performer, come-through leader, all that,” he said. “He’s on his way. It’s really a thrill to watch it happen.”

Fox Sports studio commentator Howie Long called him Megatron, the nickname given to Detroit’s Calvin Johnson, who at 6-5 and 237 pounds, was a three-time All-Pro in Detroit in nine seasons before retiring after 2015 as the epitome of a fast, power receiver. And locally, we know that former University of Washington star John Ross (5-11, 194), now with Cincinnati, set the NFL’s land-speed record at the combine three years ago with a 4.21-second 40-yard dash.

How do those measurables compare to Metcalf? The 6-3, 230-pounder ran a 4.33 at the combine, a blink better than Johnson’s 4.35. So it can be said that Metcalf’s combination of size and speed are as good as the NFL has seen.

In terms of physical skills, Russell Wilson added another point.

“It’s his ability to jump, but I think that his ability to catch the football in contested areas (shows) how strong his hands are,” he said. Wilson was quick to point out the intangibles too:

“When you have the work ethic every day, and the mentality every day, then great things are going to happen, especially if you match that up with his kind of ability,” he said.  “I’m glad we’re also friends, because I love who he is as a person.”

I asked Seahawks coach Pete Carroll for the nearest athletic comparable in his college or pro experience — my vote was for Seahawks Hall of Famer Kenny Easley, the best, and most ferocious, football athlete I’ve seen — and he came up with a good one: James Lofton, the Hall of Fame wideout from Stanford, whose 17-year career from 1978 to 1992 included four years in Buffalo (1989-92), when he teamed with Andre Reed in the Bills’ Super Bowl run.

“James had that marvelous look to him — so long, just statuesque almost, in the way he played,” he said. “They were just both gorgeous-looking players, kind of really stood out.

“But DK is different than that. This is a one-of-a-kind player.”

Taken with the sixth pick in the first round of the 1978 draft by Green Bay, Lofton was a sleek 6-3 and 192. Metcalf is almost 40 pounds heavier, like Kam Chancellor (6-3, 225). Which brings up the inevitable question: Any thought about using Metcalf a bit on defense, or special teams?

“Always, yeah,” Carroll said. “I’ve always thought about finding ways for DK to add in. He does some things for us; maybe someday, be able to help us.”

The son of offensive lineman Terrence Metcalf, who started 25 of 84 games with the Chicago Bears from 2002 to 2008, and in 2006, succeeded the Seahawks as NFC champions, DK has the athletic genes to attempt almost anything.

He said he played safety in his freshman year of high school in Oxford, Miss. In college at Mississippi, where he played just 21 games, he was used to block kicks. But that didn’t turn out well.

In the seventh game of his junior year against Arkansas, he injured his neck, which required season-ending surgery. He declared for the draft, but the injury was among the reasons scouts felt skittish about taking him, causing him to fall to the Seahawks.

“I was on the edge, rushing,” Metcalf said of the injury. “I got hit under the chin, trying for the block, and broke my neck.

“I don’t think (the Seahawks) are gonna try to do that to me anyway.”

Good point. Enthusiasm for one of the NFL’s greatest athletes should not override judgment. DeKaylin Zecharius Metcalf won’t turn 23 until Dec. 14, so there’s a lot of pass-catching ascendance to master first.

But he might consider leaping from behind the defensive line to become the first to catch a field goal attempt at launch. Then he can go full diva.

Two picks in two games.@buddabaker32 is a game-changer. #SNF pic.twitter.com/viXqMXWNgp