Pete Carroll said he “didn’t recognize” the game the Seahawks lost 44-34 at Buffalo. It should be a bit familiar. Defense is so bad it’s putting Russell Wilson’s health in jeopardy. 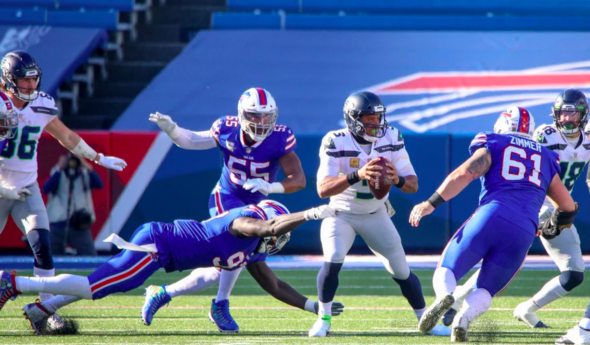 It’s rare that a Seahawks game is all but decided on the first opponent play. But after the opening 60-yard kickoff return by Buffalo’s Andre Roberts, things Sunday in sunny Orchard Park, N.Y., descended from whoops to whoa to WTF. Footing was never regained.

Four turnovers later, the Seahawks, 6-2 at the season’s halfway point, fell into the great middle of the NFL, where problems and solutions are a weekly 50/50 proposition, unable to get ahead of things.

When the one-time staples of a Pete Carroll-coached team, defense and the running game, collapse at once, it can become too much for the one nearly sure thing, Russell Wilson, to make up.

This new-fangled idea of letting Wilson dominate from the start is hard to pull off, down 17-0 and missing the top two running backs (three, counting Rashaad Penny), while the patchwork defense ends up surrendering more points than in any game in the Carroll era.

The most serious consequence from the 7-2 Bills’ 44-34 (box) hammering was the clear and present danger to Wilson. He was sacked five times, hit 11 more times, and among the turnovers were two fumbles lost during strip sacks, seasonal firsts. His two interceptions were the result of him forcing the action.

Besides being potentially unhealthy, the result is more awkward when news breaks on the same day that coach Pete Carroll was given a long-term contract extension. While few would suggest the extension was a bad idea, given that he’s one of the NFL’s most successful coaches, the timing turned into a bit of a clank when he was out-smarted in this one by the Bills’ Sean McDermott.

Carroll acknowledged that Buffalo’s plan to go almost completely to the passing game of strong-armed QB Josh Allen crossed up the Seahawks.

“We didn’t think they would just totally abandon the running game,” he said of the Bills’ strategy that produced a 24-10 halftime lead despite three rushes for 20 yards. “We planned for them to run it. We have to be able to adapt better, to make sure that we can we can turn around faster.

“If we turn the ball over four times, it’s going to be a hard day.”

In the Seahawks’ other loss, 37-34 to Arizona two weeks ago, Wilson had three interceptions. An opponent pattern seems to be emerging: Pay little attention to the run game, blitz the bejeezus out of Wilson and take advantage of his tendency to hold the ball too long, looking for the big play.

Sunday, the Bills were aided by the injury absences of RBs Chris Carson and Carlos Hyde and a wire-to-wire deficit that made the need to pass nearly mandatory for the entire game.

The Bills scored touchdowns on their first two possessions, but the 14-0 deficit looked to be halved after Wilson led the offense to the Buffalo 5-yard-line. On third-and-one, RB Travis Homer, back after two weeks with a sore knee, was stuffed for no gain. The Seahawks took a timeout. They decided to throw on fourth down, a decision that likely would have been different had Carson or Hyde been available.

“There’s a lot of different options there on that one,” Wilson said. “We’re just scrambling around there. They did a good job, so we’re trying to keep it alive. That (play has) happened so good so many times there. They just made a really good play and catch. That’s on me. We just missed.”

With his easy interception, Bills FS Jordan Poyer killed the drive that would have restored some balance, and Allen, who had no turnovers for only the second time this season, took the offense for a field goal, the third score in Buffalo’s first three possessions.

The 17-0 lead was cut to 24-10 at the half. The Seahawks did close to 27-20 with a Jason Myers field goal with 1:56 left in the third period. But the early end zone pick was decisive on an afternoon when three more drives would end with turnovers.

“We just don’t turn the ball over like that, but we did today,” Carroll said. “They capitalized on all of it and just made us pay.”

What a beauty of a throw! 😱@DangeRussWilson connects with @DMoeSwagg23 for the TD!

The Seahawks defense welcomed back SS Jamal Adams after a month-long injury absence, and started newcomer DE Carlos Dunlap. There was improvement in the pass rush, which dropped Allen seven times, but he still completed 31 of 38 passes for 415 yards.

The Seahawks committed heavily to the blitz despite missing to injury starting CBs Shaquill Griffin and Ugo Amadi, and went long with a very limited CB, Quinton Dunbar, whose sore knee forced him to play soft.

“He had a tough day,” Carroll said. “He was playing on a sore knee, and we had to take him out. He tried to suck it up and keep going, but we needed to get him out.

Should he have come out earlier?

“Under these circumstances, no,” Carroll said. “We needed him to play today. We just needed to help him more. There was some stuff where he was by himself. Things that we did, didn’t work out for us.”

Trailing 27-20 early in the fourth quarter, Carroll’s lust for the blitz burned them.

The defense had the Bills at third-and-16 at Seattle 35 and figured to escape the possession with a field goal attempt. Instead, Allen beat a jailbreak blitz with a screen pass to WR John Brown, who went 33 yards. The Bills scored one play later.

“We definitely found a way to be effective rushing the passer today,” Carroll said. “But it was the other stuff that wasn’t as effective. I contributed a call that they hit the screen on, third and 15. So all the calls didn’t work out quite right.”

The upshot was across-the-board failure, a long trip to nowhere, which wouldn’t be the first time such was said about a visit to Buffalo.

“I don’t recognize that game,” Carroll said. “We haven’t seen a game that looked like that. I don’t have any place in my brain for it. We really had a hard time in the first half getting started on defense and on offense, and they just made it look easy.”

Carroll’s desperate hope is for good health news ahead of the road game Sunday in Los Angeles against the Rams.

With nemesis DT Aaron Donald now putting Wilson in his crosshairs, progress in mandatory, imperative and urgent, if they want to keep Wilson as he is — in one piece.