A 4-1 win over San Jose on Decision Day allowed Seattle to recapture some swagger and end a bizarre regular season. No. 2 Seattle will face No. 7 LAFC on Nov. 24. 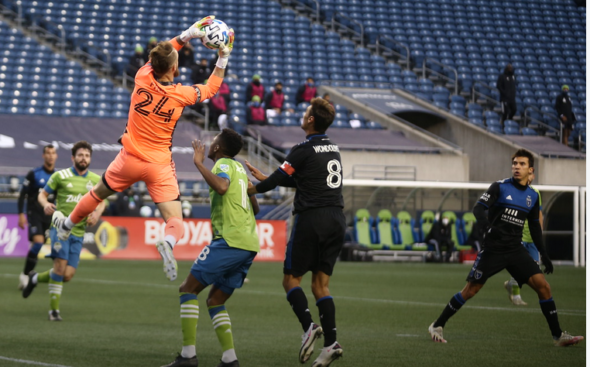 Stefan Frei makes a save to help preserve the Sounders’ 4-1 win Sunday at the Clink. / Lindsey Wasson, Sounders FC Communications

Defending MLS champion Seattle Sounders FC ended the regular season with a touch of flair, bucking a recent trend of dreary results in time to secure the No. 2 seed in the Western Conference MLS Cup playoffs.

After a goal-packed second half provided a 4-1 win over San Jose at CenturyLink Field Sunday, the club learned it will open at home against No. 7  LAFC on Nov. 24 (7:30 p.m., ESPN).

While the season was a bizarre, pandemic-induced departure from the norm, the playoff seeding for Seattle was one of consistency — a fourth straight season the club has finished second in the West.

Since 2015, the league’s Decision Day has provided a festively chaotic atmosphere for the final day of the regular season by playing the final batch of games concurrently. The move spiced up both the final round of play for the Supporters’ Shield and the race for the home fields, with murmurs of score lines around the league causing stadiums to buzz with energy.

This year, there were no fans to provide the buzz, though many were likely recovering at home from another buzz, following the national Indecision Day Nov. 3.

Decision Day weirdness this time included the Eastern Conference playing all its matches well before the West kicked off, with the race for the Supporters’ Shield reduced to  Philadelphia and Toronto FC (which Philadelphia won after a 2-0 win over the New England Revolution).

In the West, the playoff entrants were already decided, with only seeding to be determined.

Seattle’s match was a departure from the club’s recent contests. After crashing out of the MLS Is Back Tournament – the league’s bubble competition in July that officially re-started play after the shutdown – the club put together a 7-2-1 run that propelled them to first in the West. From there, the club fizzled, going 1-2-3 heading into Sunday.

Despite recent woes, Seattle has shown that capturing momentum at the right time can propel a team to great things — two MLS Cups in four years, plus another trip to the finals in 2017, are proof.

After a lethargic first half, Seattle powered in two goals in three minutes, thanks to lightning-quick play from Nicolás Lodeiro and Raúl Ruidíaz in the 52nd and 54th minutes.

A goal from San Jose in the 57th minute provided 15 minutes of discomfort for the defending champs. But Lodeiro put his quality on display in the 74th minute, stealing a ball from a defender and slipping it through to Jordan Morris, who calmly scooped the ball over a charging goalkeeper to make it 3-1.

Seattle tallied its final goal in the 80th minute, bullying an own goal out of fullback Marcos López as Ruidíaz was chasing down a second goal.

It demonstrated the power of being dangerous in pivotal moments, a quality that the club seeks to retain heading into the postseason.

As for the playoff field, COVID-19 has thrown enough asterisks into the mix to require footnote reading that would make a graduate student blush.

An uneven number of games played necessitated the use of points per game as the primary qualifier instead of points. The change was put in place due to a lengthy COVID outbreak that affected the Colorado Rapids and forced them to miss five matches — including one against Seattle booked for Oct. 14.

The East has 10 teams in the postseason compared to the West’s eight, with the bottom four engaging in a play-in round to cull the herd. This change became necessary after Nashville SC, initially placed into the West to start the year, was moved when the league decided to play its irregular season in regionally isolated schedules, creating imbalanced conferences.

Those regional schedules drastically reduced the number of opponents available to each team. Seattle played Portland, San Jose and LAFC four times apiece (including Seattle’s loss to LA at the MLS Is Back tournament, which didn’t count in the league standings), as well as Vancouver three times.

The familiarity of four matches against LAFC hasn’t provided a clear advantage to either club, with a split of the series’ four games. Seattle won both at home, while LAFC won at home and served up an emphatic 4-1 victory in the round of 16 at the bubble tourney in Orlando.

Sticking in the minds of both teams will be last season’s West final, which saw Seattle upend LAFC 3-1 on the road and gave rise to the now memetic quote from Sounders head coach Brian Schmetzer after the match that he was “feeling better than (LAFC head coach Bob Bradley).”

“Our team on that day (last year) executed the game plan to perfection and that’s why we won down there. This game is the same. The players are going to know their assignments and then it’s up to them.”

Home field advantage — even bereft of fans — may prove helpful. Seattle is 7-1-2 at home this year, LAFC is 1-6-1 on the road. The clubs employ some of the league’s premier attacking talent. LAFC has scored a league-high 47 goals and boasts the services of golden boot winner Diego Rossi, who has scored 14 goals. Seattle has 44 goals (tied for third), though its defense has been much stingier, conceding 23 times compared to LAFC’s 39.

Seattle may struggle with player availability. Centerback Xavier Arreaga and holding midfielder Gustav Svensson may not be eligible for the yet-to-be determined date, since they are expected to be called up for international duty and will miss the fixture due to MLS’s mandatory quarantine procedures upon their return from overseas.

Top scorer Ruidíaz will be available upon his return from the Peru national team since, having already recovered from COVID-19, he is considered a “recovered person” by league protocols and is not required to quarantine after travel.

After all the disruptions that 2020 has thrown at his side (and the world), Schmetzer said that the win-or-go-home mentality of playoff soccer may bring a small sense of normalcy to the Sounders, even without the advantage of 40,000-plus screaming fans.

“The weirdness of 2020, the difference all goes out the window,” Schmetzer said. “Now it’s the playoffs. Now it’s money time. There are (a  maximum) four games left. In that sense, I agree that it feels like a little bit like last year, where it was one-game playoff games, and you had to win or you were going home.”