Thiel: Why the Seahawks defense is so bad

A closer look at the Seahawks secondary discloses an injury calamity over time that is the principal reason they are reckoning with bad football history. Ah, but Carlos Dunlap . . . 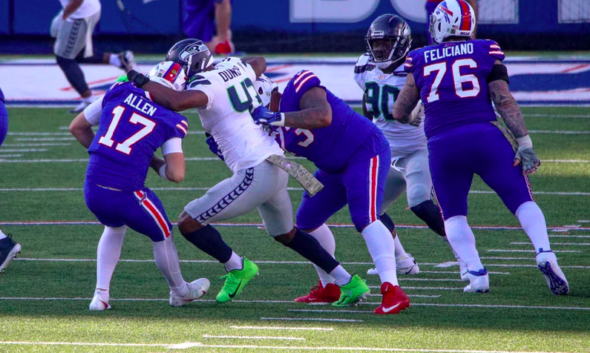 Eight games into an NFL season traditionally mandates analyses regarding the local gridsters: How far have they come, how far will they go, and whether, after a particularly odious game, the head coach and coordinators should given blindfolds and cigarettes, or just have their Seattle careers shot on the spot at dawn.

Let’s set aside that conventional exercise. Let’s consider whether, for one part of the Seahawks, the defense, the football calendar is not at midseason, but at the beginning of the season.

That doesn’t mean tossing out a 6-2 start that leads football’s toughest division. But a re-set offers the chance to consider the facts that defenders can’t practice team defense on Zoom or in summer workouts, as can offenses. Nor did anyone have preseason games.

That’s three-quarters of the Seahawks secondary new to one another. The final position belonged to a holdover, CB Shaquill Griffin, about whom coach Pete Carroll said Monday, “He’s been a fantastic player for us.” He hasn’t played the past two games and Carroll didn’t sound optimistic Monday about a return in time for the trip to Los Angeles to meet the Rams Sunday.

And the nickel cornerback in Buffalo was not the original starter, Marquise Blair, nor the backup, Ugo Amadi, Instead, third-stringer D.J. Reed  played 85 percent of the snaps in his second Seattle game after being signed as a free agent in August.

All of the foregoing is meant to suggest that a big part of the problem with the Seahawks defense is that its back end is on a learning curve together that normally gets worked on in a May mini-camp, then training camp in July, then pretend games in August.

But here they are. All fall hurt.

Every team has injuries. Few have has as many as this new crew in Seattle. Dunbar and his bad knee played 54 snaps against the Bills when it should have been zero, but they had no one else with much NFL experience to replace him, until he couldn’t go in the fourth quarter. Hello, practice squad warrior Linden Stephens.

“It was a hard game yesterday for him physically,” Carroll said of Dunbar. “The ball was coming his way a lot. He had trouble getting where he needed to get to.

“He goes through a week of (rehab) process to get through it. He gets a little bit of work on one one day, a little bit of work the next day, to try to put together a full day’s work in preparation for each week. We’re trying to rehab his knee. It’s just been a chronic thing for him.”

The context is useful to help explain why Carroll admitted he was nevertheless surprised that the Bills almost completely abandoned the run game to prey on Seattle’s weakness that can be seen from space, not just every opponent defensive coordinator.

The vulnerability was illuminated by the startling information in this tweet by noted grid scholar Bill Barnwell.

That should tell you what the Bills defensive coaches saw, and why the Seahawks were down 14-0 before Wilson got his hands on his fourth snap of the game.

Not only have Griffin, Diggs, Dunbar and Adams not played enough, they haven’t played enough together. The sorts of connections that went on among Richard Sherman, Kam Chancellor and Earl Thomas, where one word, one nod, set the course to doom the next offensive play, is impossible.

Carroll was asked what the absence of time together costs a secondary.

“There’s a level of confidence that comes from the communication and the regularity of the communication,” he said. “It’s not just verbal communication. It’s nonverbal. It’s a feel for one another. This is this is such a high-tech area of the game. Guys have to really be able to fit and feel one another. We have just not had that continuity.

“I’m hoping that as we get to the stretch, that we’ll keep our guys out there together, and we can make some progress.”

That’s about all Carroll has right now — hope for health. And DE Carlos Dunlap.

In his first game Sunday after his trade acquisition from Cincinnati, Dunlap played 68 percent of the snaps and had five tackles, three for loss, a sack and two quarterback hits.

“He played really well in those circumstances,” Carroll said. “He probably knows half the guys out there. He didn’t know who he was talking with.”

Fortunately for the Seahawks, rush ends have a brief playbook that requires minimal oration. He’s part of the high-risk strategy of heavy blitzing to keep the ball out of the Seattle secondary. It sort of worked Sunday, sacking Josh Allen seven times. But in getting off 38 passes, Allen completed 31 for a career-high 415 yards.

Until the secomdary heals, it’s the only strategy. It might be midseason elsewhere in the NFL, but the Seahawks defense is starting an eight-game season Sunday.

Said Adams post-game: “Obviously, it’s new guys, including myself, and we’re feeling each other out as far as knowing what we can do. There’s always pros and cons with everything, so we just got to continue to get better, continue to learn our teammates and continue to jell.”

One final note on the secondary’s casualty calamity: After playing in the first two games, DBs Neiko Thorpe and Lano Hill each went on the injured list in October with season-ending injuries. Just in case you wondered where the veteran backups were.

Fans and coaches love to fling about the cliche that injuries are no excuse. As far as winning and losing, injuries are often the reason.