Forget for a moment about the Seahawks defense. Since Aaron Donald was drafted, the Rams are 8-4 versus Seattle. He’s the biggest reason. Run, Russell, run. 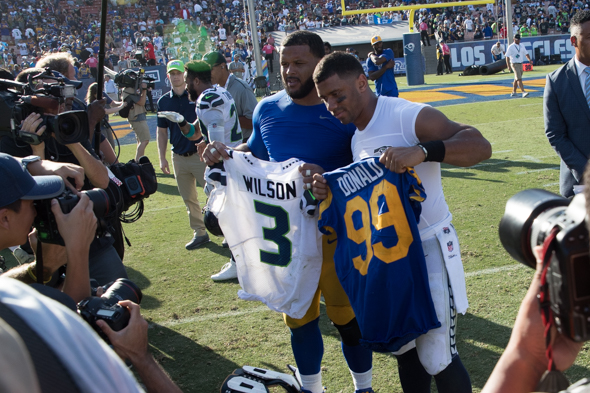 Russell Wilson and Aaron Donald swapped jerseys after the Seahawks’ 16-10 win at the Coliseum in October 2017. / Drew McKenzie, Sportspress Northwest

Amid all the lamentations about the worst defense since chicken wire for rhinos, recent history says that even when defenders were healthy and respectable, the Seahawks still are forced to out-shoot the Los Angeles Rams.

It the teams’ past five meetings, four of which were won by the Rams, LA has averaged 33.6 points per game, the Seahawks 22.1. If the Rams were to play Sunday at new SoFi Stadium against the same Seattle defense the NFL world saw the past Sunday in Buffalo, the Rams (5-3) might outscore the NBA champion Los Angeles Lakers.

Even though the defense is likely to be helped by the presence of DT Snacks Harrison for the first time, DE Carlos Dunlap for the second time and SS Jamal Adams for the fourth time, the deception-laden Rams offense designed by junior wizard Sean McVay seems destined to put up at least a 30-spot regardless of who Seattle trots out.

That means to have a shot, the Seahawks are going to have to survive outlier DT Aaron Donald by putting up a 30-spot too.

While it would seem easier to circumnavigate Mt. Rainier’s Wonderland Trail on a skateboard than to get around Donald, that is exactly why Russell Wilson is the highest-paid quarterback in the land.

He has to do what he does better than what Donald does best.

Sunday, Wilson might have to do it without his starting center.

Ethan Pocic didn’t practice Wednesday, making a surprise appearance on the injury report because of a concussion. In the 44-34 loss to the Bills Sunday, he played all 65 snaps, as he has in every game this season. Coach Pete Carroll made no mention of Pocic in his Wednesday presser, and the team has had no contact work Monday and Tuesday.

If it were me going against Donald, I certainly could see manufacturing a story about a headache. But Pocic is a pro, not prone to whining or fear.

If he’s in the concussion protocol, he likely wouldn’t be able to go Sunday. That would be unfortunate for Wilson.

After Donald was taken in the first round of the 2014 draft, the Rams are 8-4 against Seattle. In those dirty dozen, he has 12 sacks, 51 tackles, 19 tackles for loss, 33 QB hits, two passes defensed and two forced fumbles.

As does everyone who has watched Donald, Carroll gushed.

“To keep coming back and being great again, is a great accomplishment,” he said Wednesday. “He continues to really draw all the attention and make the plays. I think he’s got like 40 times he’s affected the quarterback by himself, nine sacks. There’s a lot of times when he’s close as well.

“He’s just a dominant football player, as good as you can get. As good at his position as anybody has ever been. It’s a real challenge to go against him, and it’s good for us. We need the work, the challenge.”

Whoa, Pete. I mean, I get the nobility of the challenge, and all. But no, going against Aaron Donald is not even good for a water buffalo. Nobody gets better being struck by a Humvee. There is no validation in facial treadmarks.

If Pocic and RBs Chris Carson and Carlos Hyde can’t play — Carroll was iffy on the backs Wednesday —  the Seahawks need to consider a game plan with at least 15 direct snaps to DK Metcalf.

The offense was already sufficiently stressed against the Bills. Wilson was sacked five times, lost the ball twice and was hit 11 times. Granted, he was behind from wire-to-wire, and victim of  mistakes of others, particularly the poor play that was called on fourth-and-1 at the Bills 5-yard line in the first quarter. Dead man throwing.

“I don’t think he’s pressing, no,” he said Monday. “I think yesterday he was challenged by it, though.”

Carroll loves the word challenge. It’s a coach’s one-word euphemism for “Man, will we get our butts kicked, or what?” He used it again Wednesday to describe this week’s attempt to scheme against Donald and the Rams defense that is giving up the league’s second-fewest points (19.1 ppg) and yards (291.9 ypg).

“It’s a coach’s challenge,” he said. “Trying to figure out who has come up with some ways to handle him, slow him down, trying to create ways to make it easier for our guys to find him in the alignments.

“He poses as much a threat as anybody that plays the game, in anybody’s position. He’s that good. Every play, he’s right there trying to get the quarterback.”

Wilson and Donald are the best at what they do. The Seahawks have to get Wilson to a spot to do his thing in the less-than-two seconds it takes for Donald to join him. Without Pocic, it’s closer to one second.