DE Snacks Harrison will be elevated from the practice squad Sunday. The O-line has a newbie too. Versus Aaron Donald, Kyle Fuller will start in place of injured C Ethan Pocic. 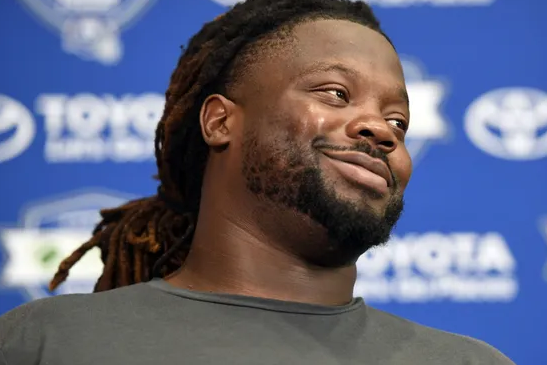 After a month on the practice squad, former All-Pro DT Snacks Harrison will get his shot Sunday in Loa Angeles. / NorthJersey.com

It appears the Seahawks will be introducing two linemen new to the lineup Sunday in Los Angeles against the Rams. It’s a good news/bad news deal, sort of a “Snacks & Sacks” Jeopardy! category (miss you, Alex Trebek).

The good news for Seahawks fans is that 6-3, 353-pound Damon “Snacks” Harrison will finally move into the defensive-line rotation after a month on the practice squad, which presumably involved the lifting of a lot celery sticks and free weights.

“There was a lot of things that I needed to work on,” he said Thursday, grinning a bit. “The being patient part of it was tough.”

The bad news was on offense, where Kyle Fuller will start at center, up against Rams tornado Aaron Donald. Coach Pete Carroll said Friday that season-long starter Ethan Pocic had a concussion Sunday against Buffalo but didn’t report symptoms until after the game. He didn’t practice all week.

That Fuller, 26, likely will start is no slight against him personally, it’s just . . . well, he’s had 12 special teams snaps this season. That’s it. And 145 scrimmage snaps over parts of four seasons with four NFL teams since he was a seventh-round pick of the Texans out of Baylor in 2017.

Offensive coordinator Brian Schottenheimer looked into the Zoom camera, tilted his chin up a bit, and summoned the sorts of words Thursday that were required of every boxing manager who put his fighter in the ring with Mike Tyson in his prime.

“Kyle Fuller is a guy that we’ve got a lot of confidence in,” he said. “I thought he had an unbelievable training camp, probably one of the most improved players that we had. So if he has to go and answer the call, we don’t have any question he’ll play well.”

“They’re trying to get Aaron in one-on-one matchups,” he said. “It’s a challenge for anybody blocking him, and and blocking this (D-line) group. But Kyle’s up to the challenge. If he has to go and play, then he has to play. He’s shown he can do it.

“You don’t block Aaron and that front with just one one guy. It takes all five guys working together.”

On the other side of the line of scrimmage is a more amusing saga.

Harrison not only has been among the NFL’s best run stoppers for his eight-year career, his story is just as good.

He went unrecruited out of high school in Louisiana, ended up at an NAIA Division II school in Iowa (William Penn in Oskaloosa) and went undrafted out of the tiny Quaker college.

He signed as a free agent in 2012 with the New York Jets, where he became a starter in his second year. By 2016, his first year with the Giants, where he signed a five-year, $46 million contract, he was named first-team All-Pro.

Here’s what Pro Football Focus wrote about him in 2019:

In a season (2018) he spent split between the New York Giants and Detroit Lions, Harrison led all at his position in run-defense grade (93.8), total run stops (46) and run-stop percentage (15.97%). He also led all qualifying interior defensive linemen in the percentage of run-defense snaps played where he was the first to make contact with the ball carrier at 21.18%.

Harrison has led his position in total run stops and run-stop percentage for four consecutive seasons, and he’s been crowned as PFF’s Run Defender of the Year in each of the four years, as well . . .  an immovable force against double teams and will rarely lose one-on-one situations when opposing offenses make the mistake of putting a guard or center in such a position.

After signing a one-year, $11 million extension with Detroit for 2019, his production fell some and was not re-signed. His most recent game action was Dec. 29, when the Lions’ 3-12-1 season ended.

Because of Covid-19, Harrison, 32 on Nov. 29, was prepared to sit out the 2020 season, to protect his family. But as the NFL rolled out its health protocols, he decided to return because of size of his family — he has seven children, from age 12 to one-year-old twins and a five-month-old.

“Honestly, it was being in the home with my kids full-time during the season that kind of made me want to jump back out there a little bit,” he said, laughing. Eager for respite among large, mean men instead of rugrats, he was willing to take practice-squad money to play with a winner. His former Lions teammate, Seahawks FS Quandre Diggs, said he knew of a good one. 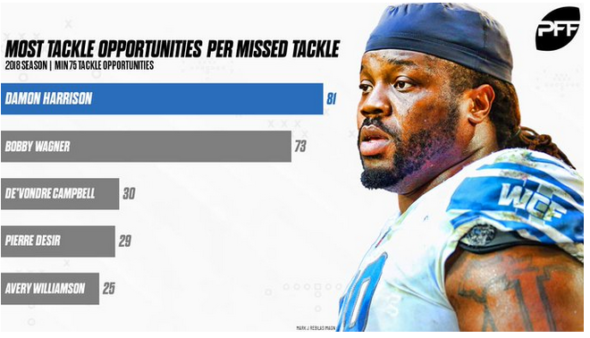 He signed with Seattle Oct. 7, and believe or not, moved his entire family from the Dallas area. He was quick to give his wife, Alexis, serious props for managing the feat.

“I don’t know until I had to do it myself. Oh my goodness, man, that’s tougher than anything I’ve ever done in my life. Hats off to her. She’s the one that makes it happen. I got to give it all to her.”

It clearly made him appreciate his gig, even though Seattle fans pestered him on social media about when he would take the field. He explained himself on Twitter last week.

Yeah it’s killing me not to be playing right now. I fell out of love with the game the last few years and took it for granted. I’ve found that love again. This is my season of patience and humility.

Because he was on the 16-member practice squad, he was available to other teams if they wanted to advance him to the 53-man squad. He reportedly received inquiries from Tampa Bay and Miami.

“Once the work became a little more than I had expected, I wasn’t going to run from it,” he said. “I felt like I was supposed to be here.  I’m not a guy that likes to move around much or change scenes a lot. So, really, once I got here and got settled in, it was a no-brainer to stay.’’

As for the nickname, one of the best in football, he long ago was over any pejorative. The coach who first signed him, Rex Ryan of the New York Jets, noticed his penchant for eating during meetings. Ryan started leaving Rice Krispies treats on the D-line’s meeting-room desk, and hung the nickname on him.

If the offense can finally #LetRussCook, the defense can #LetSnacksEat. It isn’t as if the Seahawks defenders haven’t left a lot on the table.