Thiel: Wilson bearing too much of Hawks’ load

In the 23-16 loss to the Rams, Russell Wilson played like someone trying too hard to be everything to everyone. Yet coach Pete Carroll doesn’t trust him on fourth down. 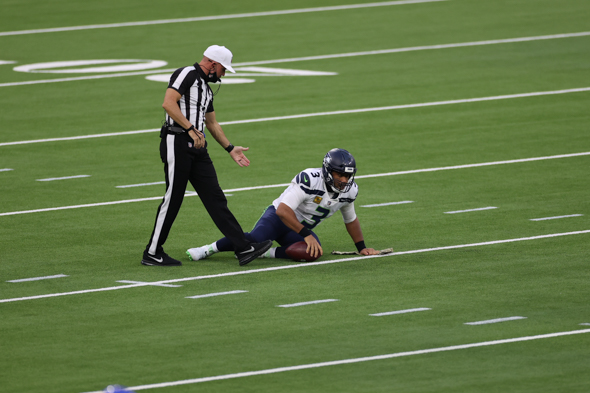 Popular as he is, even Russell Wilson can feel nearly alone. / Drew McKenzie, Sportspress Northwest

Listening to Russell Wilson talk himself up after the Seahawks’ third loss in four games Sunday, I couldn’t help but think of Stuart Smalley, Al Franken’s needy nerd character on Saturday Night Live.

Said Stuart earnestly to the mirror: “I’m good enough, I’m smart enough, and doggone it, people like me.”

That’s how fast things have unraveled since the Seahawks were 5-0 and early favorites to make the Super Bowl, and Wilson was everyone’s favorite for the MVP award.

No matter his dismissal of the idea, Wilson is straining under the enormous pressure of carrying the franchise, which was plain in the 23-16 loss (box) to the Rams in Los Angeles.

It doesn’t help that teammate and friend SS Jamal Adams referred to him earlier in the post-game Zoom chats as “the chosen one.” The intent was honorable and innocent, but what I know about the Judeo-Christian tradition suggests there is only one, and no mere mortal qualifies.

Good as Wilson was and will be again, he needs some some help, physical and psychological. Adams said he tried to supply some post-game, after two more interceptions and a lost fumble gave Wilson 10 turnovers in Seattle’s three losses. Wilson said his locker-mate told him, “I believe in you, 3.”

Said Adams of his chat: “I said, ‘You the chosen one, man. I don’t want anybody else as a quarterback.’ I believe in him. He’s gonna bounce back. Sometimes in life, you can’t control certain things.”

Wilson, normally the one saying similar things to teammates, was appreciative.

“That meant a lot to me,” he said. “Especially the type of player he is, how hard he plays. You got a lot of respect for people who lay it on the line every day.”

The informal therapy session was inspired by several things: Losing for the fifth time in six games with the Rams, falling to third place in the NFC West, and hearing for the second week in a row coach Pete Carroll say, “I don’t recognize us.”

Most urgently, the Seahawks need to get over themselves because they play a home game Thursday against the 6-3 Arizona Cardinals, to whom they have already lost, and are riding a sugar high from their Hail Mary win Sunday over Buffalo.

Everyone, including Wilson, was in agreement that his second-quarter interception of a 22-yard pass to the end zone was an egregious misplay, the likes of which the Seahawks haven’t seen from him.

It wasn’t just that the throw to TE Will Dissly was easily pickable. It was that his pre-throw rollout exposed acres of green space that would have made for a big rushing gain, normally his forte.

Wilson agreed: “I should have ran it,’’ he said. “I think I’ve just got to get better. I’m not going to make it overly complicated. It’s not on anybody but me.”

Yet there was another misplay that suggested the pressure has Wilson in disarray.

Trailing 23-13 with eight minutes to play, Wilson had the offense on the move to the LA 38-yard line. On a third-and-four, Wilson was distracted by player positioning. The play clock ran out and the Seahawks were penalized five yards for delay of game. The next play, Wilson threw a short pass on a crossing route to TE Greg Olsen that was picked via an unarguably brilliant effort by CB Darious Williams.

But it was the delay of game that was mystifying. Normally an ace in situational football, Wilson was caught losing track of time.  That almost never happens to him. But as most of us know, such lapses can happen under high stress.

Wilson isn’t the only one under stress. Carroll made a decision on Seattle’s first drive of the third quarter that was dubious at best.

After a Wilson third-down scramble left him inches short of a first down at the Seattle 39, Carroll burned a timeout in a fruitless challenge of the spot. The offense stayed on the field while Wilson tried to draw off LA’s defense with a hard count. When that failed, Carroll  called for a punt instead of going for it with the league’s highest-scoring offense.

“I don’t want to give them the ball at the 40 — that’s like a turnover, like you just handed them an interception, if we don’t get it,” Carroll said. “Let (punter Michael Dickson) kick the ball inside the 10-yard line and go play defense.

“It was too early in the game. I just felt like it wasn’t worth it.”

Dickson did his job, punting to the 12. The beleaguered defense didn’t. The Rams went 88 yards in 14 plays for their only points of the second half and a 23-13 lead.

“The players would love to go for it, and I know that and I’d love to go for it too,” he said.  “I have to work against my nature to go ahead and kick that ball right there. But I would probably do it the same way again.”

The problem is that it conveys an unmerited trust in the defense, still the NFL’s worst. The strategy made sense in the Legion of Boom days, not now.  This is an offense-first season and roster.

Because of the injury absences Sunday of RBs Chris Carson and Carlos Hyde, there’s certainly reason to pause about the choice. But there has to be a belief in this offense to get that first down. Otherwise the usually implacable quarterback might sense a loss of confidence.

Carroll and Wilson are the rocks of the franchise. When they start to crack a bit, trouble is at hand. Each is doing his best to help compensate for injury-induced weaknesses. Unfortunately,  pressing rarely works. And injury news just keeps coming.

Just over a groin injury, Adams left in the first quarter with a shoulder injury, then returned to finish the game. But it was evident that he was operating at times one-handed.

Asked how hard it is to tackle with a bad shoulder, he said, “It’s pretty hard. I will say it was hard pretty much the whole game. But I’m a warrior, man. It’s never about me, it’s about this team. I’m gonna do whatever I can to get out there as long as my legs are moving.

“Obviously, I went back out there and I was in a lot of pain, all right. I won’t sit here and lie to you.”

That sounds like an injury that might take more than four days to heal. Carroll sounded optimistic about the return of Carson for Thursday, but even Carroll hinted that his health projections are not med-school certified.

“I’ve been pretty wishful thinking on these guys,” he said.

The one aspect of this wobbly enterprise — the Seahawks  scored their only touchdown Sunday on the opening possession and have held a lead for for about three minutes in the past two games combined — that might be quickest to heal is Wilson’s mind.

He seems onto the task, spending a couple of minutes assuring his audience that his self-confidence is unshakeable.

He’s good enough. He’s smart enough. Doggone it, the 12s would like to see that.