Russell Wilson is at the center of a storm of criticism over his 10 turnovers in the Seahawks’ slide. But a wounded O-line is partly the cause of the worst sack rate in NFL. 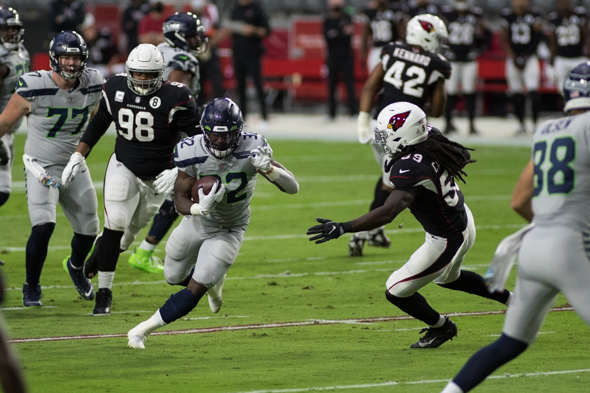 The last time RB Chris Carson was seen in action was at Arizona Oct. 26, when he had five carries for 34 yards and one reception for seven yards before spraining a foot. / Drew McKenzie, Sportspress Northwest

Furrows in the collective brow of the 12s over Russell Wilson run Grand Canyon deep. Is he hurt? Concussed? Mad at Pete Carroll? Worst of all — is he actually Mr. Limited?

The likely answer to all is no. Well, maybe he’s banged up, but he’ll never admit it. He’s like The Black Knight in Monty Python’s Holy Grail. After getting his arm cut off in a sword fight with King Arthur, TBK says, “Tis but a scratch.”

Wilson rarely admits to anything that would signal vulnerability. But after the Seahawks’ 5-0 start in which his spectacular play made him a local and national darling, he began tailing off in the game at Arizona Oct. 26 — 33 for 50 for 388 yards and three touchdowns, but three interceptions, two sacks and nine quarterback hits, and an 84.8 passer rating.

That 37-34 defeat in overtime was the first of three losses in the past four games, responsibility for which has fallen mostly upon Wilson and his 10 collective turnovers.

As with most things in football, nosedives are a team effort.

Offensive-line injuries and a subsequent falloff in pass protection have contributed to the Seahawks’ decay. LT Duane Brown and guards Mike Iupati, Jordan Simmons and Damien Lewis have missed time. The latest Wednesday is that starting C Ethan Pocic (concussion) will miss his second game in a row, and backup Kyle Fuller (ankle) is listed as questionable ahead of Thursday’s national-TV rematch (5:20 p.m., FOX) between the Seahawks and Arizona Cardinals, both 6-3.

Whether both, either or neither are available may not be known until game time. The third-string center is Jamarco Jones, 24, who has played 71 scrimmage snaps this season, including 15 at guard Sunday in Los Angeles in the 23-16 loss to the Rams.

The result of the line wounds and the Wilson miscues is that Football Outsiders ranks the Seahawks adjusted sack rate of 8.7 percent as the worst in the NFL.

Obviously, pass protection includes tight ends and backs, as well as Wilson’s ability to get rid of the ball, which has been a persistent weakness in his game.

All facets have collaborated of allow 30 sacks sacks of Wilson, fourth-most in the NFL, trailing only Carson Wentz (Eagles), Joe Burrow (Bengals) and Daniel Jones (Giants). In the losses at Buffalo and LA, Wilson was sacked a combined 11 times, with 23 QB hits.

So, the offense’s decline, while the defense remains deficient, is not solely because he’s been off his game.

“Our offensive line is a great line,” he said Tuesday, more chipper than he was Sunday after the dispiriting loss in LA. “I think you definitely have had some bumps and bruises along the way. Folks are going down, injured and dinged up. Obviously Kyle got a little bad luck. He did a great job last week stepping in (for Pocic), then (sprained) his ankle. He kept battling against a great defensive line.

“The first five games or so, we had the same consistency, for the most part, with those front five guys, and (since) gotten dinged up a little. But the good thing is that (the backups) have been battle-tested.”

The Arizona game also was when Seattle’s top two running backs, Chris Carson (foot) and Carlos Hyde (hamstring) went down, keeping alive the gruesome tradition of the Glendale stadium being a chamber of Seattle horrors, despite the 6-1-1 record there over the past eight games.

Hyde will play Thursday — “he looked strong throughout the week,” Carroll said Wednesday afternoon — and Carson was listed as questionable.

Kyler Murray getting it done on his own 💪

In case you were wondering, Arizona’s quarterback, the remarkable second-year star Kyler Murray, has been sacked 13 times, tied for 18th. That’s 17 fewer than Wilson over nine games. In his rookie season, he was sacked 50 times, two more than Wilson. So it would seem that Murray is getting smarter and his  protection is improving.

Perhaps the most unusual stat to emerge from the first matchup was the fact that Murray, despite throwing 48 times (completing 34 for 360 yards and three touchdown with one pick), was neither sacked nor hit.

That may be the defining single-game failure of the Seahawks defense in the season to date.

LB Bobby Wagner believes it can be rectified. How, he didn’t say.

“I definitely feel like there’s things that we did that game that is correctable,” he said Tuesday. “I think we had opportunities to do so. We just got to execute. I don’t think we had (SS Jamal Adams) last game we didn’t have a couple other guys. I think we’ll be able to get some.”

Wilson dismissed his swoon with a baseball-hitter analogy.

If it doesn’t work Thursday, the Seahawks, like The Black Knight, will be down a limb.

Cards’ Peterson to Budda Baker: ‘You’re on your own’

Here’s Arizona CB Patrick Peterson’s amusing description in an NFL Network interview with Rich Eisen on watching Seahawks WR DK Metcalf blow past him on the way to running down Budda Baker on his return of a Russell Wilson interception, the NFL’s most astonishing play of the season.