Thiel: The fire-Norton crowd has a reckoning

Stifling the NFL’s top offense Thursday showed Pete Carroll a Seahawks defense he said was coming. Key was a meeting led by DC Ken Norton that he called “one of the best.” 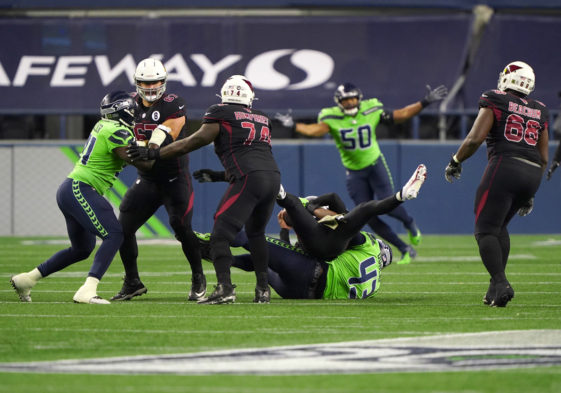 The Fire Ken Norton Club members will have to convene an emergency meeting. They just lost, and now must figure out a way to overturn the result. Such intemperate behavior is a trendy thing now.

Or, the members could accept the fact that the Seahawks, with Norton continuing as defensive coordinator, are on their way to having an NFL-average defense, which would mean playoffs and fun and something normal in a world desperate for the familiar. A brutal price to pay, certainly.

That outcome is far more likely to happen in the aftermath of the Seahawks’ course correction, a 28-21 win over Arizona Thursday in which the Cardinals, leading the league in total offense, finished more than 100 yards below their average, including a first half of six first downs and 107 yards.

QB Kyler Murray, who sprained the AC joint when he landed hard on his throwing shoulder in the first drive, according to the NFL Network, had his worst game of the season. WR DeAndre Hopkins had five catches for 51 yards. The Cardinals had 115 yards in penalties, including four false-start flags in an empty stadium. Hearing the ghosts of defeats past?

It’s hard to know how much this discombobulation had to do directly with Norton. But head coach Pete Carroll was willing to offer his view. He cited a defensive-unit meeting Wednesday he attended that was run by Norton that seemed pivotal.

“The best I’ve ever seen,” he said on his morning-after presser on Zoom Friday.
“I’ve never seen a better a better meeting for guys holding themselves accountable, and in really illustrating how well the command they had of what we’re doing.”

He said Norton had each player explain his own responsibilities in base calls.

“Each guy riffed on what he’s supposed to do, who he’s supposed to communicate with, how it’s supposed to work out, what you can count on coming from me,” Carroll said on his ESPN 710 radio show. “It was one of the great meetings of accountability. It took us to the next step.

“I said something to the whole team: ‘Something just happened here and we we’ve kind of  evolved.’ We’re where now we can go play. I thought it wa a first illustration that we’ll play better; we’ll get better than what we look like.”

Carroll has said from early on, when the Seahawks went 5-0 despite the defense giving up not mere yards but acres, that defensive efficiency was going to take time. He didn’t say the defense had been thrown together, but in a sense it was, given the trades to acquire FS Quandre Diggs (a year ago), CB Quinton Dunbar (March) and SS Jamal Adams (July).

There were no preseason games to integrate new personnel, then in-season injuries began right away with the losses of DEs Bruce Irvin and Rasheem Green, and DB Marquise Blair, and later Dunbar and Shaquill Griffin. Adams was a rare talent, but harder to make fit because he was a newcomer getting caught between coverage assignments and blitzing.

He may have been over-amped to succeed in Seattle, given his despair in New York playing for the woebegone Jets. In a USA Today story Tuesday about his appearance on a podcast “All Things Covered” hosted by Cardinals CB Patrick Peterson and former NFL CB Bryant McFadden, Adams detailed his struggles.

“Bro, I fought depression in New York,” Adams said. “There’s been so many times where I came home after a tough loss and just sat in my room in the dark – no phone, no TV. (My dad) hated to see me like that. It killed my pops so much . . . He was calling my agent at the time and saying, ‘Hey man, I don’t like seeing my son like this. I need him out of this situation.’ It took a toll on my life outside of football.

“I knew I couldn’t do it anymore when my mom called and said, ‘Son, I don’t want you there anymore.’ I knew it was my time to go.”

Playing Thursday with a shoulder injured Sunday in the loss at Los Angeles to the Rams, Adams was a lesser presence — “playing on one arm,” Carroll said — with only one QB hit and a couple of tackles. But the defense, after not getting to Murray at all in the teams’ first meeting, Thursday had seven hits and three sacks, including one by DE Carlos Dunbar on Arizona’s final play to close out the win.

“We played a really disciplined, tough-ass night of football,” said Carroll, indicating things began to change in second half Sunday in LA. “I can’t keep telling (media), ‘OK, soon we’re gonna be feeling like we played together, we need some more time.’ I don’t know I can say that anymore.

“We’ve made it to that point. We really need to play good football. There’s no reason why we shouldn’t.”

The Seahawks get a mini-bye until practice Tuesday for the Nov. 30 Monday night game at Philadelphia against the 3-5-1 Eagles, whom they beat twice last season by the identical score of 17-9. Carroll said the small break should allow Adams to heal and Griffin to return, and they may see rookie second-round draft choice DE Darrell Taylor practice for the first time. Dunbar will remain on the three-game injured reserve.

On offense, C Ethan Pocic (concussion) is expected back, as is RB Chris Carson (foot). But TE Greg Olsen ruptured the plantar fascia in his right foot Thursday and is likely out for the rest of the regular season. For a 35-year-old, it could be a career-ender. RT Brandon Shell also has a sprained ankle/knee.

If indeed the defense has shed its training wheels and dad needs no longer to run alongside, the return of Carson with Hyde means the offense can revert to ground-pounding. That will supplant the #LetRussCook option that thrilled the pass-first-and-always crowd.

“It’s like we almost took it for granted,” Carroll said. “That was disappointing, because that’s the element of our football that makes us the style of team that we are.

“It makes Russ’s job different than it is when he has to throw the ball 40 times or 50 times. He’s certainly can do it, and loves doing it, and we don’t mind doing it. But our football is better shaped when we’re when we’re balanced, and we’re attacking you.”

That reversion will grate upon football’s trendies. But if ending Norton’s Seattle career is now moot, there has to be some bone upon which to gnaw.