Pac-12 declared Stanford’s game Saturday at Washington St. no contest after nine Cougars players tested positive for COVID-19. Can WSU get healthy for the Apple Cup? 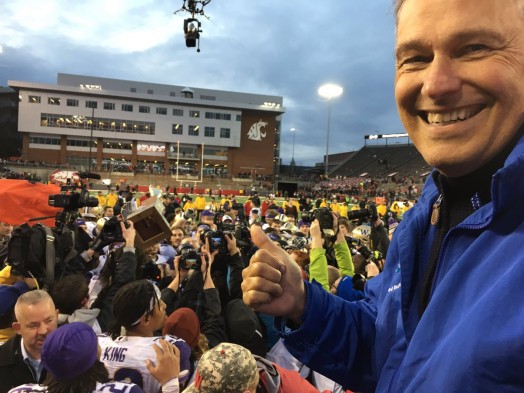 Happier days: Gov. Jay Inslee sent off the Apple Cup trophy to a sea of Huskies players and fans in the 2016 game at Martin Stadium. / Office of the Governor

The coronavirus took another bite out of the Pac-12 Conference football plan Friday when Washington State’s game with Stanford Saturday was canceled after the Cougars fell below the 53-player scholarship minimum needed to play. Per new league rules, it was declared no contest.

The Cougars’ next game, the annual Apple Cup Nov. 27 with Washington, is now in jeopardy because quarantine protocols again may keep them from fielding a team.

According to a New York Times interactive map of college campuses nationally, WSU has by far the highest number of cases in the state, at 1,4o7 Friday afternoon. UW’s Seattle campus is next at 875.

Asked whether the Apple Cup might be saved by moving the game day from Friday to Nov. 28 or 29 to give players more time to return, Chun couldn’t say.

“It’s hard to speculate right now,” he said. ‘Right now, we’ll begin that process on Sunday to see where we are with our roster.”

Washington, which has already lost one game at Cal to a campus outbreak, is scheduled to host Arizona at 5 p.m. Saturday. Since the Pac-12 reached an agreement Thursday to allow non-conference games to replace canceled games, it’s possible that UW could find a replacement on that date. The earlier WSU cancels, the easier to find a playing partner.

On his Thursday Zoom before the threat to the Apple Cup was known, UW coach Jimmy Lake thought the non-conference option was good.

“I think it’s the right move,” he said. “For me, I would definitely want it to be a Pac-12 opponent first, if there was a cancellation for our game and another Pac-12 cancellation.

“But let’s say this week, if for whatever reason our game is not happening and everybody else in the Pac-12 is booked up, then I think it’s good. We’ve practiced and prepared so much that we want to be able to play a game and get that game in the books. It will be difficult to try to travel or try to get a team here, but we’ll work through those issues. And at the end of the day, let’s let these young men get out there and play.”

“I’m disappointed for our team and our players,” first-year coach Nick Rolovich said in a statement Friday. “They have battled through so much this year. We had a good week of practice and were excited to play this game. I recognize the pain they feel with his lost opportunity but this 2020 football team is a resilient group of young men.”

Rolovich disclosed after its first game at Oregon State that 32 players were not available. He didn’t identify the players or the reasons. He said a full travel squad was not to brought to Corvallis, and that “if a few bad things happened, I’m not sure we could’ve lined up.”

A school official confirmed to The Spokane Spokesman-Review that the team held a normal practice Thursday in Pullman.

In a school statement, Chun said the Cougars fell below the 53-man threshold for “a number of reasons” and added that the school had been in communication with Stanford throughout the week, optimistic that the game could be played.

Stanford looked at other options to play a game, but determined none was feasible, the school said in a statement.

After the season opener at Oregon State, Rolovich told reporters his team had 32 players unavailable, that the school didn’t bring a full travel squad to Corvallis, and that “if a few bad things happened, I’m not sure we could’ve lined up.”

Before de Laura’s positive COVID-19 test, the Spokesman-Review reported there had been only one known case on WSU’s football team and just five within the athletic department since daily antigen testing began in October. As of last week, the school had administered more than 5,000 daily tests to football, men’s basketball and women’s basketball players.

Men’s basketball coach Kyle Smith reported contracting COVID-19 on Wednesday, forcing him to miss at least one game. No other members of the basketball program were placed in the protocol.

WSU-Stanford is the sixth Pac-12 game to be canceled or changed this season.