Huskies were all around better vs. Arizona than they were in the opener against Oregon St. Now they just have to wait to see if anyone, like the Cougars, can play them this weekend. 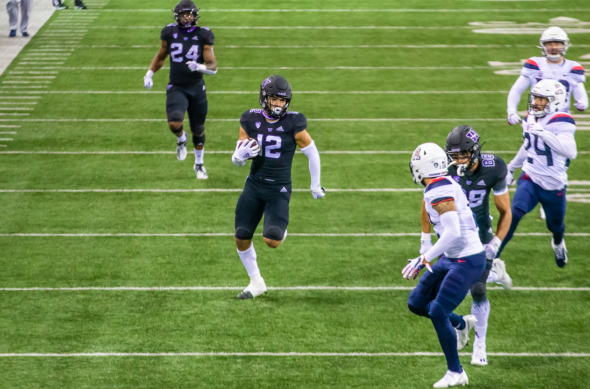 Huskies WR Puka Nacua is on his way to a 65-yard touchdown against Arizona Saturday. / Brian Morse, UW Athletics

This Washington Huskies football team may have to be taken a little more seriously. As in Southeastern Conference seriously.

That’s the land of giant offensive lines, versatile quarterbacks, ruthless defenders and layers of fast running backs. As well as coaches with some swagger.

Here’s some samples of what rookie head man Jimmy Lake had to say after the 44-27 triumph (box) Saturday night broken over the heads of the Arizona Wildcats:

“I know for a fact our humongous offensive line wears on people. Eventually you’re gonna break. It’s over 2,000  pounds, and we keep pounding and pounding.”

“We said way back in December that we were gonna be aggressive and we’re gonna attack in all three phases.”

Now imagine those words spoken in an Arnold Schwarzenegger Terminator voice, and you have a sense of the Husky Stadium proceedings.

The dawgs keep on rolling 🙌@UW_Football gets their 4th touchdown of the game! pic.twitter.com/BMOrZf9o6V

The Wildcats were down 17-0 before they had a first down, or even a yard. They had 40 yards of offense in the first half, and gave 11 back on the first possession of the second half. Until the Huskies, up 44-0, starting subbing in reserves, Arizona might have ended the game with negative yardage, which would have produced either spontaneous combustion or travel back in time.

The walkover was a clear contrast from most anything in 2019, an 8-5 trudge in what turned out to be Chris Petersen’s final year of coaching at Washington. His fading interest becomes clearer in light of what the high-energy Lake is doing with lot of the same talent, despite 10 players leaving the program with eligibility remaining.

Saturday was an uptick even from a week ago, a 27-21 win over Oregon State in the season opener. This time, the Huskies, who beat the Wildcats 51-27 in Tucson last year, were dominant immediately on both sides of the ball, and even on special teams.

A week ago, a punt-team gaffe on the first drive put the Beavers up 7-0. This time, a potential 3-and-out was salvaged when the punt was faked and upback Jackson Sirmon, normally a linebacker, took the snap behind the UW 31-yard line and ran four yards for the first down.  Three plays later, QB Dylan Morris connected with WR Puka Nacua on a 65-yard touchdown pass to ignite the evening.

The fake punt backed up Lake’s claim about aggression: “You’re gonna continue to see it,” he said.

It was apparent throughout the offense when the Huskies put up 239 yards passing and 233 yards rushing, the latter accomplished with four-man cabal of senior starter Sean McGrew (11 carries, 35 yards), followed by Kamari Pleasant (6-43), Cam Davis (8-46) and Richard Newton (8-81).

On defense, the Huskies pitched a 48-minute shutout until easing in the backups. Wildcats QB Grant Grunnell, who last week in a 34-30 loss to USC was 24 for 36, 286 yards and three touchdowns, plus 40 yards rushing, was sacked five times. In the first half, he was 7 of 11 passing for 33 yards. He was so distracted that one shotgun snap went between his legs and another off his hip. A TV camera caught a look on his face so forlorn it seemed he was near tears.

“To see him look like that, it’s just more motivation to keep coming harder,” said UW LB Ryan Bowman. “For us, it’s like, ‘Good, they’re on their heels, because we’re coming for them harder.'”

More importantly, after giving up 167 rushing yards to the Beavers — 133 to Jermar Jefferson, 5.8 yards per carry — the Wildcats were confined to 72 in 26 attempts, including 55 on 11 by their big gun, RB Gary Brightwell, who had 112 yards against the Trojans.

“I really enjoyed that we we stopped the run this week,” Lake said. “That was one of our keys to the game. We did not get that done (against OSU) and it was a huge emphasis with our coaching staff and players. We slowed it down big time. Made them one-dimensional.”

Before SEC analogies get too potent, the Huskies wideouts were as unproductive as a year ago. Morris’s game improved from his debut against OSU, but his numbers — 15 of 25 for 230 yards — were dimmed by at least four drops. The wideouts caught five balls in 13 targets. The reception leader was TE Cade Otton — 100 yards on seven catches, including a TD.

“Maybe I’m a hard grader, but we can still get a lot better,” Lake said of the receivers. “I know that and they know that. We have so much juice and so many play-makers, because I see it in practice. We can be a lot better at that position, a lot more explosive than we were.”

Unfortunately for Lake and the Huskies, they cannot rely on the bromide of a long season to book improvements. Friday is the Apple Cup, which in this cockeyed time is the midpoint of the regular season. And it may not even get played.

Washington State is dealing with a COVID-19 breakout that so far includes nine players. Enough others were in quarantine that their Saturday home game with Stanford was canceled because they couldn’t come up with the minimum 53 scholarship athletes, per Pac-12 rules.

Perhaps by Monday, WSU will know if it has a sufficient roster to invite the Huskies to Martin Stadium. Lake had no news Saturday, only that UW is working until told to stop.

“Our prep has already started because we’re on a short week for the Apple Cup,” he said. “We want to make sure the Apple Cup stays here. So first thing in the morning, all focus is on the Apple Cup.”

Given the progress shown by Lake and the Huskies Saturday, it would not be unreasonable for the Cougars to call in sick.

🙌 @UW_Football WR @AsapPuka goes 65 yards for the touchdown to give the Huskies the 7-0 lead! pic.twitter.com/Vw2iCZfYGh