For the first time since 1944, there will be no Apple Cup. A COVID-19 outbreak among WSU players caused cancellation of Friday’s game. UW looking at Utah and BYU for a sub. 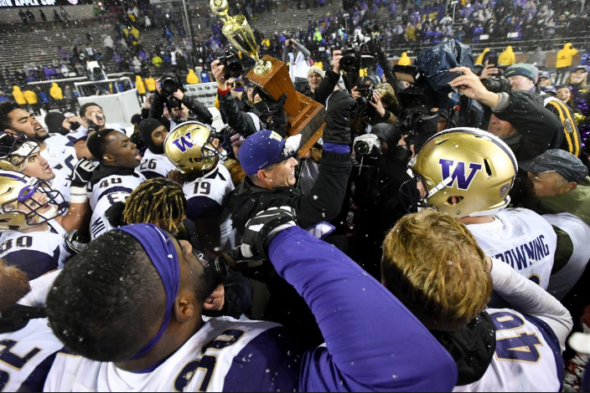 The Cougars have temporarily run out of healthy players, so the Apple Cup football game is among the latest victims of the rapidly spreading coronavirus ravaging the nation. The annual rivalry game between Washington and Washington State, scheduled for Friday, has been canceled.

The Cougars already bowed out of a scheduled contest against Stanford Saturday because they would not have the Pac-12 Conference’s required minimum of 53 scholarship players available. WSU athletics director Pat Chun released a statement saying that the school “cannot forecast a scenario that allows us to reach that threshold by the end of the week.”

In a statement released Sunday, the conference office said the decision was based on
“. . . football policy due to Washington State not having the minimum number of scholarship players available for the game as a result of a number of positive football student-athlete COVID-19 cases and resulting isolation of additional football student-athletes under contact tracing protocols. Under Conference policy, the game will be declared a no contest.

“Not contesting this game is very disappointing to our student-athletes and our fans.  While all of us want to see our football student-athletes on the field competing, our number one priority must continue to be the health and safety of all those connected to Pac-12 football programs.”

Because of the length of isolation and quarantine requirements, the game was in jeopardy as soon as the Spokane Spokesman-Review reported  Thursday that WSU freshman starting quarterback Jaden De Laura had tested positive for COVID-19. Chun said Friday that nine players were in the protocol.

Although Washington players have had no positive tests, the Apple Cup is the second game lopped from the UW schedule revised in September, once the conference had cut all nonconference contests and planned a seven-game slate. But a virus outbreak in Berkeley caused UW’s first scheduled game at Cal to be declared a no-contest.

Now, UW is in the hunt for an opponent for the weekend.

“This is so disappointing for our players, coaches and staff, as well as Husky Nation as we were all looking forward to the Boeing Apple Cup this week,” said UW athletics director Jen Cohen in a statement. “This is one of the best rivalries in college sports and every year we circle this game at the start of the season.

“We will work with Pac-12 to prioritize this game and look into any opportunities to play it should there be an open date for both schools down the road. We also understand that the Pac-12, in conjunction with local and state officials, developed policies that placed the health and safety of students, coaches and staff as the top priority. We want to provide an opportunity for our football program to compete this weekend and are working to find another opponent.”

Since new conference rules mandate that the first choice of opponent to fill a cancellation comes from the conference, Utah is a possibility. The Utes’ game against Arizona State Saturday is in jeopardy for the same COVID-19 problems.

Outside the conference looms an intriguing potential candidate — eighth-ranked Brigham Young University. Competing as an independent, BYU is 9-0 against teams outside the Power 5 conferences. Saturday the Cougars beat North Alabama 66-14 and do not have another game until hosting San Diego State Dec. 12.

The Huskies recently finished a home-and-home series with BYU, winning both by a combined 80-26.

However, a tweet from Bruce Feldman of The Athletic late Sunday afternoon said BYU was not immediately interested because it wanted to wait until the season’s first BCS rankings  came out Tuesday.

SOURCES: #BYU turned down the opportunity to play #Washington this coming weekend. UDub had reached out yesterday but was told BYU wanted to wait until after the CFP rankings Tuesday to gauge their place. “It’s off the table.”

Yet later on, Pete Thamel of Yahoo Sports contradicted the Feldman report, saying his sources told him BYU is interested.

Source: Some context on the potential BYU-Washington game. BYU is interested in playing, but only if they can lock in a contract immediately. They are concerned that Pac-12 will make UW play Utah on Sunday if ASU can’t play. “If we can get a game locked in, we want to play.”

Apparently, this situation will be an episode of the new live-streamed docu-drama: “2020: When up is down.”

In any event, the new Pac-12 scheduling rules adopted last week have requirements for non-conference bidders: The Pac-12 team must be the home team, and the school comply with the Pac-12 protocols, considered the most stringent in college football. The change must be requested by no later than Thursday.

WSU opened with a 38-28 home win against Oregon State and a 43-29 road loss at Oregon. Coach Nick Rolovich disclosed after the OSU game that 32 players were unavailable. He did not say whether the absences were injuries, suspensions or opt-outs, but did say it was a close call as to whether the 53-player minimum would be met for the game in Corvallis. WSU reported no COVID-19 positive tests prior to hosting the Ducks.

The cancellation will be the Apple Cup’s first since 1944, when Washington State did not field a team because of World War II. UW has won seven consecutive and leads the all-time series, 74-32-6.