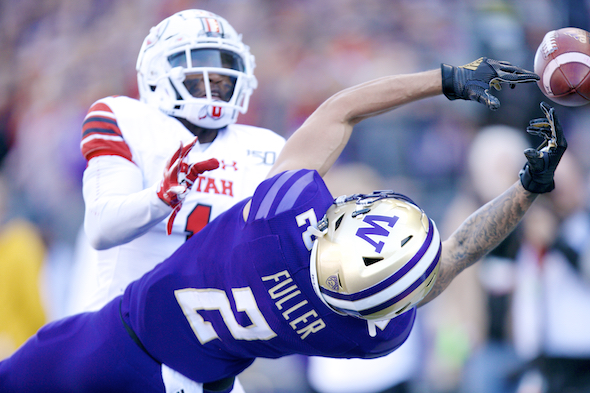 Once the self-titled Conference of Champions, the Pac-12 has been reduced by the pandemic to a clearinghouse for the lost. Thursday afternoon, it put together two orphans, Washington and Utah, all dressed up for the holiday weekend with no place to go.

The Utes and Huskies abruptly will get together at 7:30 p.m. Saturday at Husky Stadium to get some TV revenues from ESPN.

Washington Sunday learned its Apple Cup partner for a game Friday wasn’t happening when Washington State couldn’t field a team of 53 players because of the virus. Tuesday afternoon, Utah learned that its Saturday-then-Sunday game at Arizona State was scuttled for the same reason. The Sun Devils even had coach Herm Edwards testing positive for COVID-19 as proof.

So rather than scare up Four Seasons Total Landscaping University to play a nonconference game, the Pac-12 matched up the two conference members in hopes they will avoid infection long enough to play some ball in the dark and cold of an empty stadium by a big lake.

For the Huskies and Utes, it could be worse — ASU now will miss its third game in a row.

A Pac-12 statement on Tuesday evening read, “The scheduling of this game is consistent with the Conference’s commitment to provide opportunities for student-athletes through maximum scheduling flexibility while still prioritizing health and safety.” Translation:  Sufficient student assets in Seattle and Salt Lake City are available and momentarily healthy enough to book a revenue stream.

‘I’m just so excited for our students, coaches and staff to have a chance to compete again this weekend,” UW sthletics director Jen Cohen said in a statement. “Like we’ve said, they have worked so hard to get to this point and we want to provide opportunities for them to be on the field. We’ve had some great battles with Utah the last few years and I’m looking forward to welcoming them to Seattle this weekend.”

It came together quickly because the Utes, according to coach Kyle Whittingham, were putting in their game plan for the Sun Devils.

“All the focus right now is on ASU,” he told Salt Lake reporters Tuesday morning. “Until we’re told differently, that’s where we’ll put the majority of attention, because we’ve still got to pay attention to the other possibility.

“We hope to find out sooner rather than later. It would be ideal if we find out today. As the week moves on, it becomes a more of a difficult situation. But we have no control over that. So we’re just waiting for a definitive answer. Until that point, the main focal point is Arizona State.”

Now he gets 2-0 Washington on the road. After having their first two games declared nolo contendre because of their own virus problems, the Utes Saturday lost at home 33-17 to No. 20-ranked USC.

Since Washington owned series between the schools 12-1, the win was among the biggest in Whittingham’s then-15 years at the school.

“It’s up there for me,” he said. “I’d have to go back and look at them, but it’s up there. It’s very, very satisfying, especially under the circumstances.”

Utah has lost many of its top players, including QB Tyler Huntley and RB Zack Moss. A new quarterback, sophomore Cam Rising was 3-for-6 for 45 yards and had two turnovers before a shoulder injury ended his season in the first quarter. He was replaced by graduate-student South Carolina transfer Jake Bentley, who was 16 of 28 for 171 yards with one touchdown and two interceptions.

The Huskies are 2-0 after beating Oregon State 27-21, followed by an impressive 44-27  victory Saturday over  Arizona, both at home. Their season opener at Cal Nov. 7 was canceled when the Bears couldn’t muster 53 players either.  The Apple Cup was supposed to be in Pullman. After Utah, the Huskies’ next game is also at home, Dec. 5 against Stanford.

That means their only road game scheduled right now in this caricature of a season, which has seen eight Pac-12 games canceled in three weeks, is Dec. 12 at Oregon.

The Pac-12 is supposed to book a round of cross-division games Dec. 19 to accompany the conference championship game. But at this point, even getting to December looks like a formidable achievement against a virus that is having its way with the U.S.