LAFC had plans for revenge. But as with most things in 2020, plans were thwarted. The Sounders again had their way, 3-1, in the Western Conference playoffs Tuesday. 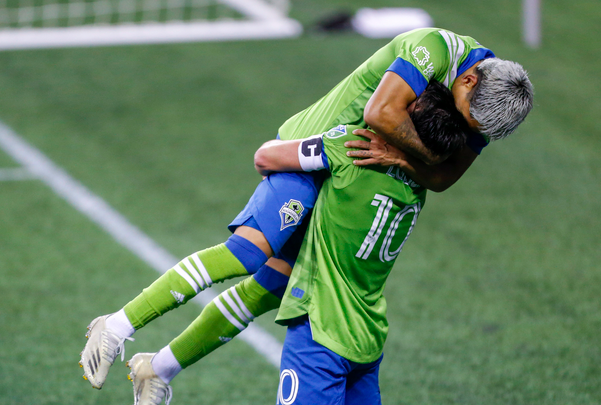 Raul Ruidiaz gets a hug from Nico Lodeiro after a goal Tuesday night against LAFC. / SoundersFC.com

Los Angeles FC came to Lumen Field focused on righting a perceived wrong a year in the making — avenging the 3-1 dismantling the Sounders handled them after a record-smashing 2019 regular season in last year’s Western Conference final. Instead, Seattle sent them packing with a 3-1 win, with all goals scored or manufactured by striker Raúl Ruidíaz.

Seattle forward Jordan Morris acknowledged that they felt like Los Angeles was angling for payback.

“We knew coming in that that was going to be on their mind,” Morris said. “Going to their place last year and winning to go on to the final, that was tough on them, and propelled us to another championship. We had to be prepared and match their intensity. I think we did that. On another day, I think we score a couple more, but the whole team, you can look at every player and see how we matched their intensity and that’s why we won tonight.”

LAFC coach Bob Bradley’s squad experienced a 90-minute span that was more Casey at the Bat, while Sounders coach Brian Schmetzer left the stadium feeling “better than Bob,” his famous remark from a year ago, for a second consecutive year.

The Sounders were determined to buck the trend, and were rewarded with a conference semifinal match with FC Dallas at Lumen Field Dec. 1 (6:30 p.m., FS1). Dallas ousted the Portland Timbers Sunday on kicks from the penalty mark.

COVID-19 had a marked effect on the proceedings. Apart from seats bereft of jubilant fans, both sides were without several marquee players who were in quarantine protocol following their returns from international duty.

Los Angeles was missing four players due to positive tests: forward Diego Rossi, forward Brian Rodriguez, midfielder José Cifuentes and defender Diego Palacios. All had played more than 1,000 minutes for LAFC this season, but the loss of Rossi stung the most — the Uruguayan won the 2020 Golden Boot with 14 goals in 19 starts.

Seattle opened the scoring in the 18th minute, when Ruidíaz sent a cross through the penalty area to Jordan Morris. He drew pressure, then cut the ball back to Nicolás Lodeiro, who struck it with his first touch to curl the ball in at the left post.

LAFC was gifted a golden chance two minutes later to equalize and disrupt the reigning champs’ rhythm. Left back Nouhou was caught out in his own end and tripped up Carlos Vela after a turnover, conceding a penalty kick. Vela, however, chose to drive his penalty straight up the middle and into the arms of a waiting Stefan Frei, wasting the chance.

Ruidíaz provided the energy breakthrough for the home side in the 66th minute. Leading 1-0 and with the visitors circling closer and closer to an equalizer, Seattle won a corner. Lodeiro’s ball from right side skipped off of a defender and started bouncing toward the 18-yard line, away from the Peruvian. Ruidíaz stepped up-field, twisting his body to reach the ball and smashing it with his first touch through traffic toward the right post. A hand from diving LA keeper Pablo Sisniega wasn’t enough to keep the ball out of the net.

A goal from LAFC’s Eduard Atuesta in the 77th minute provided a moment of concern, after the midfielder pulled off a sliding finish on a cross from Carlos Vela from the right side.

Ruidíaz quickly handed Morris a dagger, which the forward wasted no time driving home. The Peruvian broke into space on the right side in the 80th minute and was rewarded with a leading ball from Lodeiro. Ruidíaz raced ahead before slotting the ball back inside to Morris, who calmly finished for Seattle’s final goal.

The assist gave Ruidíaz eight goals and six assists in seven playoff matches — a conversion rate that would cause even the British pound sterling to be jealous.

“That is a very impressive stat to me,” Schmetzer said. “I talked about the 2018 Portland (playoff) series. We talked about last year, the 3-0 down at LAFC. Raul has scored goals, but the importance of the goals, his ability to be a creator, (on the first goal) he swings the ball across to Jordan and Jordan lays it off to Nico — that’s such a good soccer movement play. That’s just instinct. (The second) comes from a corner kick. Raul knows where the ball is going to go already. He makes it look so easy. Guys like that earn every cent, because in these big moments, in these big games, guys like Raul are going to be the guys that win you those games.”

A disallowed second LAFC goal in the 88th minute for offside kept the match from having too dramatic a finish. Instead, Seattle put its championship pedigree on display, eating up five minutes of stoppage time and knocking out LAFC for the second year in a row.