Seahawks had good news from the weekend’s results, but the NFL offered bad news to all when it forced the Broncos, because of virus violations, to play without a QB. Brutal. 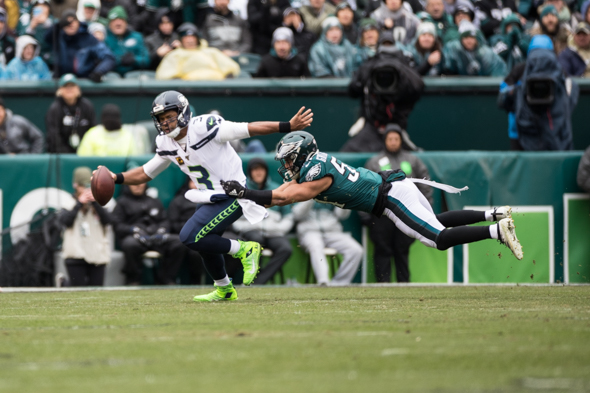 Russell Wilson was sacked six times against the Eagles in Philadelphia on Nov. 24, 2019, a 17-9 Seahawks win. / Drew McKenzie, Sportspress Northwest

The good news over the weekend for the 7-3 Seahawks was that the Patriots beat the Cardinals (6-5), and the 49ers (5-6) beat the Rams (7-4), helping advance the cause of winning the NFC West as they head into the dessert portion of the 2020 menu: The next four opponents have a sugary combined record of 11-31-1.

The bad news was a report that their Monday night opponent, the 3-6-1 Eagles in Philadelphia (5:15 p.m., ESPN), were giving first-unit snaps in practice to rookie backup QB Jalen Hurts, 22, presumably in anticipation of subbing out veteran Carson Wentz for some or all of the game.

Normally the introduction of inexperience, even for the Heisman Trophy runner-up behind Joe Burrow, would be good for an opposing defense. But Wentz has been so bad this season that LB Bobby Wagner and crew likely are in full slobber over the opportunity.

Hurts? He has played 31 snaps, and thrown two passes, both complete. You can see the clear and present danger of a perfect passer.

The worst news was not Seahawks-specific, but bad for anyone interested in an NFL championship season. The league undercut this weekend its integrity of competition by ordering the Denver Broncos, because of COVID-19 protocol violations, to play a game without a quarterback.

That led to a contest Sunday of abject futility, much derision and a cheap win for the New Orleans Saints, 31-3 in Denver. All because of the stubborn refusal of the league to concede to an out-of-control pandemic with a game cancellation. If the Seahawks win Monday to improve to 8-3, the only NFC team with a better record is New Orleans at 9-2.

The NFL so wants to complete intact its schedule that it is putting players’ health at risk — the very thing it said it vowed to protect with its its stringent rules about testing, isolation  and quarantine for COVID-19.

When a team is rendered borderline dysfunctional with the wipeout of its QB room — and the inability to hire from outside because of the mandatory six-day delay for testing clearance — a forfeit or a no-contest cancellation were the only reasonable options.

Using a practice-squad receiver to play his first NFL game at a position he barely played at Wake Forest in 2018, was unconscionable. His semi-helpless presence at the top level of the industry introduced the threat of half-speed, where his teammates slow down to compensate, and/or his opponents slow down to avoid serious harm in the inevitable blowout.

Any coach in any team sport involving significant contact knows the peril of a player out of his element. Kendall Hinton was one for nine with two interceptions. The Broncos finished with a franchise-worst 112 yards of offense. It’s not just a bad look. It’s dangerous.

The debacle began Tuesday when QBs Drew Lock, Brett Rypien and Blake Bortles were found to be in violation of mask-wearing and social-distancing protocols after being in close contact with QB Jeff Driskel, who tested positive the previous Wednesday.

In a video conference Saturday, the NFL told Broncos CEO Joe Ellis and general manager John Elway that the players weren’t allowed to play. But the game would go on as scheduled Sunday, unlike other outbreaks where the league went to great lengths to re-book postponed games. The short notice didn’t even allow the unfortunate Hinton to practice once with his teammates.

“Maybe the league (was) just making an example of us,” said Broncos safety Kareem Jackson after the game, suggesting that the league wanted a public punishment to act as a deterrent. “It’s our guys’ fault for not wearing their masks. But, at the least, maybe move the game to the next day, or whenever, just so we’re given a fighting chance. Obviously disappointing. I’m not sure why it wasn’t moved. I have no clue.”

The NFL has issued no explanation, just a leak of the news through its house organs. Regardless, it introduced a league-mandated competitive inequity, well beyond fines and loss of draft picks for violations, instead of deploying less damaging competitive options.

Before the game, Lock, the starter, tweeted an apology, writing, “In a controlled and socially-distance area, we let our masking slip for a limited amount of time. An honest mistake, but one I will own . . . I sincerely apologize and I fully understand why these safety precautions are so important. Doing the right thing for a majority of the time is not good enough.”

The apology was necessary and seemed earnest, but he deserved sanction for violating rules that his union accepted as work conditions. Yet to strip the Broncos of a fair ability to compete before choosing other options appears to show the NFL panicked and defaulted to the draconian.

A cancellation is a serious team punishment, but it doesn’t jeopardize individual players. Major League Soccer, confronting the same problem of uneven numbers of regular-season games because of virus outbreaks, devised a point system that helped determine playoff teams and a seeding.

The pro leagues generally have agreed to a Covid/reserve list that players enter and leave based on test results. Teams can be short-handed temporarily, much as with physical injuries, but it is seen as a cost of doing business in a pandemic.

The Broncos outbreak at one position, the most critical position, needed a better solution 24 hours ahead of kickoff. Playing 15 regular-season games instead of 16, in terms of potential playoff seedings, is a problem that can be worked out. But putting forth the slop in Denver was reckless, useful only to keep intact TV revenues.

The Seahawks and every team operate in fear that an entire season can come tumbling down based on virus randomness. As coach Pete Carroll put it last week, “It’s day to day.”

That requires the NFL to adapt to the reality of an already difficult situation. It has to realize that the integrity of the schedule during a national crisis is less important than doing right by its players, as well as fans who count on fairness as a bedrock of their belief in sports.