Thiel: Down 21, Huskies’ Morris picks it up fast

A spectacular second half followed a bad first half, as the Huskies ran off 24 unanswered points to stun Utah. QB Dylan Morris made the play of the night by solving a mistake. 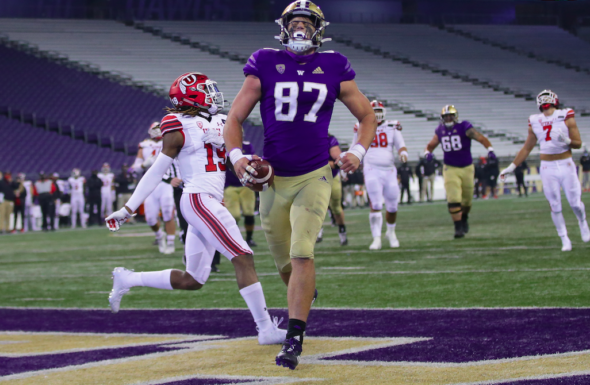 In the middle of what would become one of the most remarkable game-winning drives in University of Washington football history, the thing fell apart. Momentarily, but ominously.

QB Dylan Morris, busy converting the worst game of his freshman year into his best, was in the shotgun scanning UW’s alignment against the Utah defense before a play on a second-and-10 at the Utah 44.

With 80 seconds left and the Huskies trailing 21-17, suddenly the football hit his right leg and fell at his feet.

Another mistake. After nearly error-free efforts in the Huskies’ previous two wins, Morris had three interceptions and a passel of dubious judgments against a formidable defense. This premature snap surely would doom the attempt at the Huskies’ most preposterous comeback in the past 32 years.

“Obviously the cadence was mis-communicated between the center (senior Jake Wattenberg) and  the quarterback,” said coach Jimmy Lake.

“I saw we were a little late off the ball,” said TE Cade Otton.

Morris probably should have fallen on the ball to avoid a turnover. Instead, he scooped it up and quickly deduced the pass play’s timing was shot. Then he spotted Otton.

“I just turned and D-Mo did a great job,” Otton said. “Picking up the ball, getting it out and getting a positive gain out of it was really heads up by D-Mo. The line protected him well, even though the snap was little off.  Those little things are often the difference in winning and losing.”

The little thing was a seven-yard completion to the Otton, a play likely to be overlooked in the cavalcade of sequences that had to go perfectly in order to return from a 21-0 halftime to a 24-21 triumph (box) Saturday night that had a national TV audience rapt.

Morris’s alert rescue from disaster set up the next five plays, including a final 16-yard pass to Otton for the game-winning touchdown with 44 seconds left. The bad-snap survival wasn’t the biggest or best play at Husky Stadium Saturday, but it told an emblematic story about the kid from Puyallup and Graham-Kapowsin High School.

“That moment right there really puts it in a capsule,” Lake said. “It’s a snap coming when it’s not supposed to, and he grabs the ball, looks downfield, gets back to his reads and throws a strike.

“That’s the type of calm that he has through adverse situations. That sequence right there really captures what Dylan Morris is about.”

We’d love to share what Morris thought, but Lake has freshmen in media quarantine, as was the habit of his predecessor, Chris Petersen, because as we all know, sports journalists are scarier than 260-pound defensive ends.

Starting from the 12-yard line with 4:31 to play, Morris shed all concern for his previous errors and completed six of nine passes, including the final four in a row, and three to Otton, the 6-5, 240-pound junior from Tumwater who is the passing game’s best (only?) weapon.

“It was incredible to be a part of,” Otton said. “It’s kind of surreal thinking about it. I’m so proud of all the guys. We knew what we needed to do.

“Dylan is just the same — not too high and not too low. He a steady leader of our team and it showed up in the second half.”

Sounds like chapter and verse from First Russellonians of the QB Bible.

As is often the case with the Seahawks quarterback, Morris had to recover from early setbacks — his first turnovers of the season — to pull it together late in difficult game against the perennially rugged guys from Salt Lake City, who lost seven players to the NFL draft in April and had 80 roster players who were freshmen or sophomores.

“They landed a lot of blows, and that’s what I told the team at halftime,” Lake said. “I said, ‘Hey, Utah just landed some left hooks, some right hooks, some body blows and we took ’em. Now we need to come out in the second half and we need to start throwing our punches, and we need to land a haymaker at the end.'”

A year ago at Husky Stadium, it was Utah who scored 21 consecutive points on the Huskies in a 33-28 win in which the defense clearly bullied the home team. This time it was the Huskies defense that stood on the visitors’ throats.

Among the Utes’ six second-half possessions, two were ended by interceptions (Elijah Molden and Trent McDuffie), one by a fumble (Kyler Gordon caused, Zion Tupuloa-Fetui recovered), one on downs and two by punt. Utah had 138 yards of second-half offense.

As a senior leader and the team’s top defender, Molden made clear to teammates at halftime the game was winnable.

“My message was, don’t go soft,” he said. “It’s easy to kind of hang your head, feel sorry for yourself. I think we were fighting that feeling. Everyone feels that deep down. You get that voice in your head that wants make excuses and stuff.

I think it was blocking that noise out, staying hard, coming out the second half with a sense of urgency.”

The most urgent was Tupuloa-Fetui, who filled a void left by OLB senior starter Ryan Bowman, who didn’t suit up and was presumed to be injured. Also missing was another likely starting linebacker, Laiatu Latu, who has yet to play in the first three games.

ZTF, a sophomore from Hawaii, is emerging as one of the Pac-12’s premier defenders.

“That doesn’t surprise me, because he’s always harassing our offense in practice,” Lake said. “I’m telling him to stay away from the quarterback — he’s always buzzing right by Dylan and the other guys. Our opponents are having a really hard time keeping him covered up. To have that kind of production (seven sacks) in three Pac-12 games is phenomenal.”

The second-half explosion by both sides of the UW ball added up to the second-biggest comeback triumph in Huskies history, behind a 24-point rally in 1988 against Cal. The Huskies’ 3-0 mark tops the Pac-12 North, following Oregon State’s 41-38 upset of 15th-ranked Oregon Friday in Corvallis.

The Huskies continue to win at the auxiliary contest this year of COVID-19 avoidance. The Utah matchup was a hastily arranged replacement for the Apple Cup that was abandoned because of a virus breakout in Pullman, the same reason that canceled UW’s revised road opener at Cal.

Nothing can be done about the COVID-19 mess in which the Pac-12 finds itself. But whenever an opponent manages to get to town, the Huskies have won. Three times. They’ll try again at Husky Stadium Saturday against 1-2 Stanford.

Friday was the 100th anniversary of Husky Stadium. The Huskies may go a long while before they top the first day of the stadium’s second century. 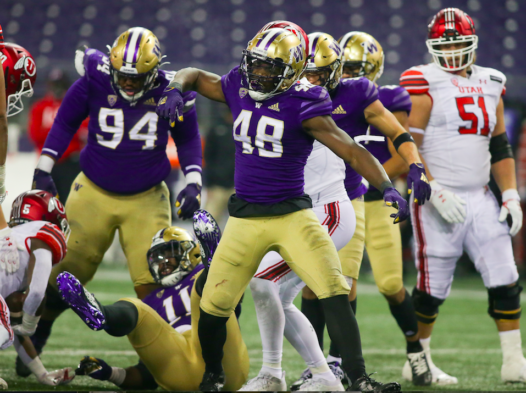 LB Eddie Ulofoshio celebrates after one of his team-high 14 tackles. / UW Athletics