The plan was to bait DK Metcalf into distraction and misplay. Didn’t work. What did work in the Seahawks’ 23-17 win was the defense, whose renaissance continues. 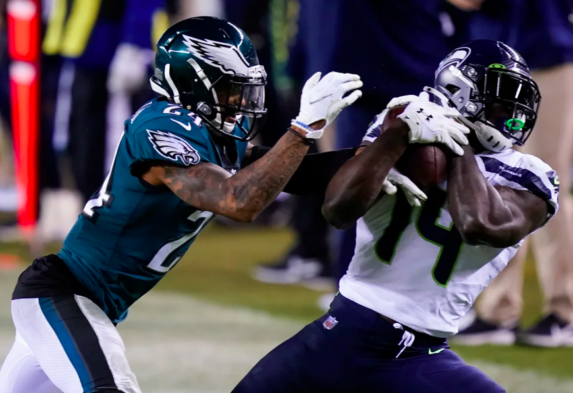 After he destroyed them in the playoffs in January with nine catches and an NFL rookie record 160 yards, the Eagles had to come up with a plan for DK Metcalf Monday night in Philadelphia. Part of it included a trade for CB Darius Slay, one of the NFL’s best cornerbacks. Another part of the plan was to piss off Metcalf.

It was a plan. Just a dumb one.

Before the game, Metcalf said Eagles defensive coordinator and former Lions head coach Jim Schwartz came up to him and said of perennial All-Pro wideout Calvin Johnson, “I was in Detroit with Megatron, but you’re not there yet.”

“It kind of made me mad,” Metcalf said. “I’m not trying to be Megatron. I’m trying to be me. I had a little chip on my shoulder the whole game.”

Early on in a game heavy on trash talk, Slay took exception to an aggressive block by Metcalf, and a shoving match ensued. But it was Slay who drew the unsportsmanlike conduct penalty. A few moments later came another shoving match, this with a lineman.

“I’m not gonna back out from nothin’,” Metcalf said. “DBs, linebackers, D-linemen.”

Eagles Darius Slay vs. DK Metcalf in a heated moment on the field: https://t.co/UBY9wKKMO6

Instead of being drawn into distraction and mayhem as would a typical 22-year-old, Metcalf responded like the veteran gunslinger in the saloon, beating every varmint to the draw — 10 catches and 177 yards, most of them over and around Slay.

The Eagles plan didn’t work, but in the wake of the 23-17 triumph (box) that put the 8-3 Seahawks atop the NFC West, QB Russell Wilson understood it.

“Gotta try something,” he said, smiling.

Having had the game of his rookie season at Lincoln Financial Field, Metcalf was already feeling good upon the return.

“It’s kind of like coming home,” he said. “You know, a place that had a chance to draft me, but they didn’t, so I got to make them pay.”

That’s hardly select company. Every team in 2019 passed on drafting Metcalf at least once, many twice. Just not the Seahawks, in the final pick of the second round. At the moment, no one rues the choice more than a shattered Slay, who said afterward that it was the worst game of his career.

“I have never been that. But I say props to him. He played his ass off today, and I have to get better.”

Trying to bait the youngster into misplay or ejection was just fine by Pete Carroll.

“I hope they keep trying,” he said. “He’s very poised, very in command of what’s going on. He handled that situation beautifully.

“I think he had a pretty aggressive block on the play. DK’s doing his thing. He’s making it known that he’s not just out there catching a football.  He’s doing the whole game.”

Speaking of the whole game, the national spotlight show was as much or more about the Seattle defense as it was Metcalf and his enabler, Wilson (22 for 31 for 239 yards and no turnovers for the second game in a row).

Forcing five consecutive three-and-outs to start the game, sacking the fading Carson Wentz six times and hitting him a dozen times, and getting two fourth-down stops in the fourth quarter, the defense is continuing the uptick begun in the second half of the loss to the Rams and through the Arizona victory 11 days ago.

The 3-7-1 Eagles had only 250 yards of offense, a low for a Seattle foe this season, and would have had a season-low nine points except for a Hail Mary touchdown in the final seconds, and a two-point conversion.

Twice in the red zone in the first quarter, Carroll went for it on fourth-and-short with plays that weren’t close. The Eagles have a very good defensive line, but . . .

“I had a terrible first quarter,” he said. “I thought I should kick my own butt. Golly, we didn’t handle the fourth-down situations like we needed to. Felt like I took the momentum away, and so I was disappointed. I didn’t play that much better later in the game either, to tell you the truth, but started lousy. Anyway, sometimes you can screw it up.

“Neither one of them worked. We lost all of whatever momentum we could have had in the first quarter by not getting scores.”

Years of success have taught Carroll that owning up in moments of failure is the best way to get through them quickly.

It also helps to have Wilson, the human eraser.

After a barren, brutal first quarter for both teams, Wilson, on a third-and-13 play, pulled the trigger on a 52-yard beauty to Metcalf over Slay to the Philly 1-yard line. A touchdown two plays later finally broke the torpor.

“They brought pressure, and DK’s always a great option racing down the field,” he said.
“To be able to have all the answers in every circumstances is really key, especially on this third down situations.”

The next possession went 66 yards, the final 16 coming on a rugged 16-yard run by RB Chris Carson — his first game in a month — for a touchdown and a 14-0 lead.

The Eagles, who have been savaged by injuries, including needing starts from 12 players on the offensive line, weren’t quite done, but weren’t in control. A terrible fourth quarter end zone interception thrown by Wentz when the receiver went the wrong way pushed to 15 his league-leading total and set up a seventh win in a row by the Seahawks over the Eagles, including their playoff ouster in January.

SS Jamal Adams, finally recovered from a sore shoulder that allowed him to hit with both arms, had a team-high nine tackles, a sack, a tackle for loss and two QB hits. He said the last 10 quarters on defense have been transformative.

Perhaps they can invite Darius Slay. After his night with Metcalf, he could use a party. 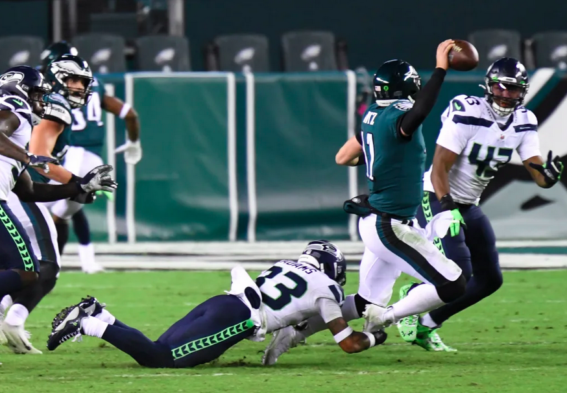