WR Josh Gordon is eligible to play for Seahawks Dec. 27 vs. the Rams, and RB Rashaad Penny could be back Monday. For Seahawks fans, it’s beginning to look a lot like Christmas. 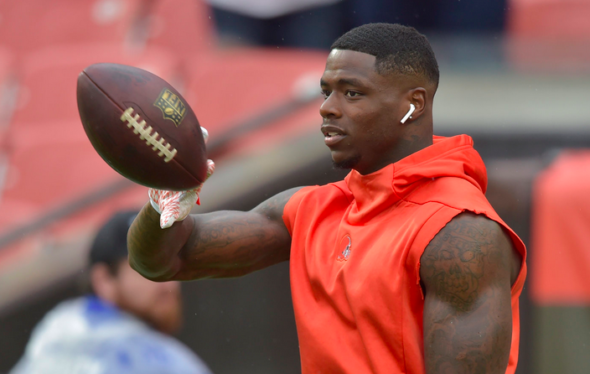 Despite his immense talent, Josh Gordon fell all the way to 28th on the waiver wire before the Seahawks claimed him Nov 1, 2019. / nbcsports.com

Just in case you blocked it out, here’s a Seahawks chronology from one year ago:

And notables LT Duane Brown (knee) and DE Jadeveon Clowney (core) were wobbling around in pain that diminished their play.

We all know that injuries in the NFL are random, varying from team to team, player to player, with few connections year to year and day to day. The little reminder above is offered up only to fans who have booked the remainder of the Seahawks regular season at 5-0.

The cavalcade of Christmas-season crap was part of why the Seahawks lost three of their four December games, missed out on sweeping the 49ers (by an inch), and in the playoffs were forced to travel to Green Bay, where their season on a frozen night broke down because of injuries — after a trip to Philadelphia to beat a team more broken down than they were.

In the off-season, the Seahawks armored up the position with free agent Carlos Hyde, which was smart, but only went so far.

By October, the Seahawks were dipping into the franchise’s recycle bin for Alex Collins and Bo Scarbrough. As with Marshawn Lynch and Robert Turbin in December, they were emergency hires when Carson was injured again, along with Hyde this time.

Sunday, Carson and Hyde were back togther and in action, Carson carrying eight times for 41 yards and Hyde 15 for 22 yards, and both had a pair of receptions, in Seattle’s 23-17 win over the Eagles.

Then came Thursday. As the Seahawks prep for the 4-7 New York Giants Sunday, Carson was listed as limited in practice (foot) and Hyde didn’t participate (toe). But by Friday, Carroll sounded optimistic both would play.

Amid the perpetual mystery at running back came a sliver of good news for the Seahawks: Carroll confirmed Penny will be back at practice Monday, 364 days after his injury.

“Rashaad’s getting real close to doing some stuff,” coach Pete Carroll said Thursday. “I’m excited to see if it’s going to be these next couple days or Monday, But we’re right there for Rashaad to jump back in here.”

Mr. Sunshine said this Nov. 10: “He’s working out, he’s cutting. He’s as strong as he’s ever been, he’s at a good weight for him. It’s just a matter of when they feel, and he feels, that he’s got the confidence to go out there and bang those cuts.

“Being a speedster and a stop-and-start kind of guy, he’s got to get all that movement done before we can cut him loose.”

After a year away, it’s anyone’s guess about his fitness. But as every department store manager used to say: Part-time help in December is a big deal.

Which can also be said for Gordon.

The NFL finally reinstated Gordon, 29, from his indefinite suspension Thursday, but the earliest he can play is the week 16 game with the Rams Dec. 27.  Gordon signed a one-year deal with the Seahawks in September. If he registers negative COVID-19 tests, he can attend team meetings and individual workouts starting Wednesday, but not practice. The timing suggests that the NFL’s indefinite suspension, never explained, meant a calendar year.

Gordon has played 63 games since the Cleveland Browns selected him in the 2012 supplemental draft. He has 247 receptions for 4,252 yards and 20 touchdowns in his career.

When he applied for reinstatement in mid-June, his lawyer, Adam Kenner, told reporters that the death of Gordon’s brother in November was the cause of his lapse that drew the suspension.

“That set him back,” Kenner said. “But since that time, he has realized how important it is for him to take the right steps, do what’s proper, and understand how to manage these issues. He’s installed the right team around him to make sure he’s on the right path. He understands he’s been given every chance. He looks forward to making the most of this.”

Naturally, Russell Wilson, who heard the news just before practice, was delighted.

“He’s an amazing receiver, a guy who was great last year for us,” he said. “Obviously, he’s been a great player, but I think more anything else, it’s a testament hopefully to his growth in life.”

Gordon’s problem has been addiction. He has not been regarded as a disruptive or selfish teammate. But in his Seattle turn, he was little-used. In 136 snaps over five games, Gordon caught seven balls in 11 targets for 139 yards, including a 58-yard diving catch against Carolina, a play offensive coordinator Brian Schottenheimer won’t forget.

“He really only gets a couple of his fingertips on it, but (it was an) unbelievable catch going to the ground,” he said Thursday. “I can’t wait to catch up once he gets through all the protocols. He was an unbelievable pro, just the way he worked.

“He’s got to get up to speed with the things we’re doing. I don’t think that will be any problem. He’s as confident of a catcher as there is in the NFL, with his hands and ability to make plays in traffic.”

As with the return of Penny, the Seahawks love holiday gifts, especially after the football gods a year ago left Seattle off their list.