Stanford isn’t a great team in 2020, but they played Washington’s game better than the Huskies did. The 31-26 loss exposed a defense weaker than coach Jimmy Lake imagined. 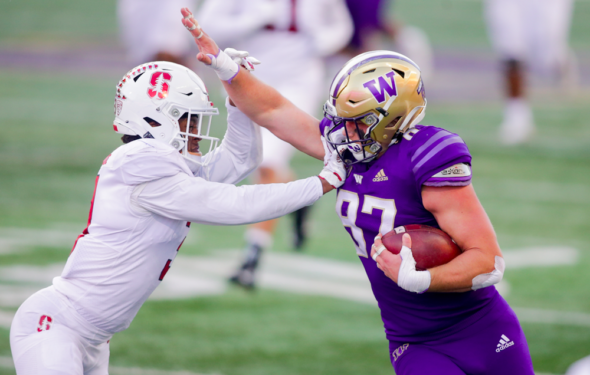 TE Cade Otton had just two catches for 46 yards, this one for 42. / Washington Athletics

In its previous three games, two of which were defeats, Stanford converted a collective 17 of 46 third-down attempts (37 percent), or 94th among big-boy schools. In its fourth game Saturday at sunny Husky Stadium, they converted 10 of 13, and were 2-for-2 on fourth downs.

Either the Cardinal’s orphan status — they were kicked out of Santa Clara County by rigid COVID-19 protocols and spent the week working out at Kennedy High School and a public park in Bellevue — did wonders for its execution, attitude and aggression, or the Washington Huskies have a fairly crappy defense.

Considering the evidence following the 11-point underdog Cardinal’s 31-26 (box) triumph over the Huskies, the choice seems clear. The defense was little match for a Cardinal offense that didn’t have anyone close to resembling Christian McCaffrey, James Lofton or John Elway.

Stanford did have up front its usual of coterie of bulldozers, half-tracks and armored personnel carriers, and that more than took care of a UW defense that could not move them off a path to the end zone. Especially in the first half: Four possessions provided three touchdowns and a field goal for a 24-3 lead.

“I mean, that’s that’s our job to get off blocks, you know,” said said a crestfallen Eddie Ulofoshio, the UW linebacker who had a season-high 18 tackles. “Coach Pete (former head man Chris Petersen) always said it’s not a crime to get blocked. It’s crime not to get off blocks. I can’t expect to beat double-teams all the time. We have to get off blocks — it’s a collective unit. I’m not frustrated at anyone.”

If he wanted to be frustrated, he could direct it toward redshirt sophomore DE Zion Tupuola-Fetui, who had become a bit of a folk hero in his first three starts with seven sacks and all-around disruptive play.

Not only did he not get a sack, or even a QB hit on pedestrian senior Davis Mills, he didn’t register a single stat. Then again, no other Husky hit Mills, either.

So Mills was good for 20 completions in 30 attempts for 252 yards, relentlessly delivering on third downs — 10.9 yards per attempt, an efficiency he’d never approached in his career.

Nearly as onerous were Stanford’s 191 yards rushing on 40 attempts. The game-long upshot was long, slow drives that allowed the Huskies only seven possessions. And they scored on five of them. It would have been six, but senior WR Ty Jones’ potentially game-tying touchdown reception in the fourth quarter was called back because of a holding penalty.

Some will blame a second consecutive poor offensive start for the first loss (3-1) of the season and the first in Jimmy Lake’s head coaching career. Not Lake.

“We didn’t stop their offense until the end of the third quarter — they scored on every single possession,” he said. “We’re not used to doing that around here, and that needs to get changed in a hurry. We’re better than that. We should have cut into that. There’s no way they should be able to go 10 for 13.”

Yet Stanford did, a team involuntarily displaced, and now must be forced to accept turning a home game against Oregon State Saturday into a road game in Corvallis.

“It’s been kind of the mantra the entire week,” a proud Shaw said. “No matter what happens, if you have a great attitude, let’s do it. Let’s work with enthusiasm and do it to the best of our ability.”

The outcome wasn’t much different than a year ago, a 23-13 win in Palo Alto. The Cardinals bullied the Huskies then too, rushing for 189 yards and holding possession for 39 minutes.

‘It’s just like we want to do on offense, be able to force our will and run the football,” Lake said of Stanford’s style. “Our last two opponents (Utah, which lost week 24-21 after leading 21-0) have been able to do that against us. It takes a lot of wind out of your sails when when you’re not able to stop the run.”

The Huskies were missing LB Ryan Bowman for a second week, and star DB Elijah Molden played through most of the game with what appeared to be a shoulder injury. But Lake wasn’t interested in that discussion.

“I’m not gonna sit here make any excuses about why that’s happening,” he said. “We got to get it fixed. We got to play better. We got to get off blocks and get in the backfield and tackle better. We can’t have runs go for five, six yards and then it’s second and five. Then it becomes a lot easier to call plays.”

On offense, for a second week in a row, QB Dylan Morris in the second half offered up a fast climb out of a deep hole, driving the Huskies for touchdowns in the two possessions of the third quarter. But he was operating without two top receivers, sophomores Terrell Bynum and Puka Nacua, who didn’t play for unspecified reasons, just as RB Richard Newton was held out again in a game that really could have used his power running.

As with most of his peers in the paranoid world of college football, Lake refuses to disclose the status of players not playing. I get the fear of disclosing vulnerabilities to opponents. But from a standpoint of explaining things, for the record, it’s annoying as hell, particularly when the pandemic is dictating public health terms and conditions to all businesses and people.

In any event, freshman Rome Odunze led UW with five catches for 69 yards, and another touted freshman, Jalen McMillan, had his first career catch. But both had misplays and drops typical of inexperience. The play of the game went to the 6-foot-4 Jones, who made a leaping dive to spear one-handed a 42-yard throw that set up UW’s first touchdown.

Given the shorthandedness, the Huskies figured to rely on a ground game, since Stanford was last in Pac-12 rushing defense (229 ypg). Instead, UW was anemic — 117 yards, led by Sean McGrew’s 65. He had the Huskies’ longest run, 11 yards, as the Huskies again played game-long catch-up.

The biggest disappointment could have been, with nine minutes left, settling for a field goal after a fumble return by Ulofoshio set up UW with a first and goal at the Stanford 10. But that award went to what Stanford did next.

The Cardinal killed the final eight minutes with a 14-play, 79-yard grinder of a drive that included conversions on third-and-10 and third-and-11 and ended at the UW 12.

To beat down the Huskies, Stanford didn’t even need to score. That’s the imposition of will, something Huskies fans remember as a trademark, but did not see from anyone in purple Saturday.