Thiel: Wilson and the mystery of the throwaway

It wasn’t a huge deal, but Russell Wilson’s intentional-grounding penalty, for no good reason, killed a potential scoring drive against the Giants. Then again, he wasn’t sacked. 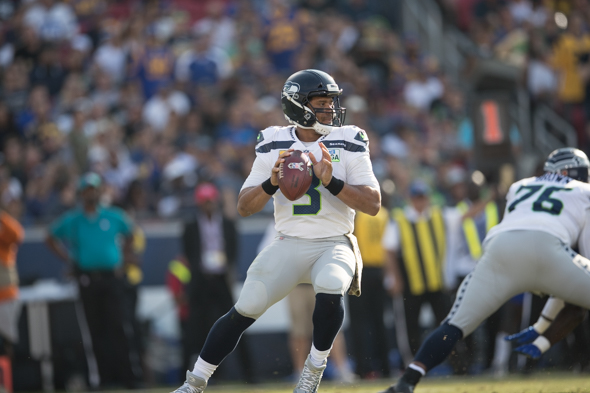 Many are the ways to pick apart one of the worst losses in the Pete Carroll’s Seahawks coaching tenure. But one seemingly minor misplay stuck in my head as perhaps the most WTF moment in the 17-12 loss Sunday to the New York Giants, which still has fans wiping off entrails as if they were at Monty Python’s cinematic restaurant when Mr. Creosote ate the final “wafer-thin” mint.

After a safety provided Seattle a 5-0 lead, D.J. Reed returned a punt 22 yards to the Giants’ 48-yard line with 24 seconds left in the first half. A couple of quick completions would have given the Seahawks at least a shot at a field goal.

“We were all fired up, about to get the ball right back there,” Carroll said on his weekly Zoom conference Monday. “We didn’t use the timeouts. We did everything we needed to do.”

Then it went pffft.

After a false start against TE Jake Hollister, Wilson threw a deep incompletion. Next play, with no one open, Wilson, under pressure, launched a ball deliberately out of bounds. The coaches have been on him to avoid sacks by getting rid of the ball more quickly.  The Seahawks had already squandered two drives with sacks, and a third ended with a snap fumbled by Wilson that was recovered by the Giants.

So Wilson followed instructions. But he threw his OB pass long and far, with no receiver nearby. Intentional grounding. The penalty was enforced from the Seattle 47, meaning that with loss of down, it was suddenly second-and-26 at the Seahawks 36 with seven seconds left. Hopeless.

Wilson got 19 yards back on a final-play scramble, but the defense was in prevent mode and it didn’t matter. A rare scoring chance was lost for no particularly good reason.

“He chucked it — just, unfortunately, threw it too far,” Carroll said. “There’s kind of a marker that you can see (on the sideline) that’s white. If the ball goes beyond the white, then they start to question how far the guy threw it away and safely.

“He needed to do it more appropriately, and they got him. Sometimes, one play can knock you out. That one did.”

The wild look of the throw made it seem as if Wilson were angry. If it was a show of temper, it might have been a pro-career first for him. And Carroll’s measured explainer conveyed rare criticism without being pointed.

The tension is clear, as would be expected for a team suddenly under-performing at 8-4.

The Seahawks in the past year made numerous costly personnel investments, some short-term, designed to reach the next Super Bowl while a healthy Wilson remains in his prime. For the plan to work, Wilson remaining in his prime is, well, the prime directive.

Unsurprisingly, Carroll fended off queries about what was causing Wilson’s downturn. Asked on his morning radio show on ESPN 710 what his concerns were about his quarterback’s play, he politely declined to answer.

“There’s some stuff I’m not gonna tell you in answering your questions,” he said, “because I just, I can’t do that. That’s serving the media concern, but it’s not serving the team purpose. I’ve gotta lay low on some of the stuff. Sorry.”

It’s unlikely we’ll hear anything substantive from Carroll or Wilson about next steps in restoring the offense. We’ll just have to bear witness as the still-winless Jets come to town Sunday with an interim defensive coordinator. The new guy took over after the Monday firing of Gregg Williams following a bad defensive play call that allowed the Raiders a final-play touchdown to escape with a win.

If the new guy is any good, he’ll see the Giants went with two safeties deep to help cut down Seattle’s penchant for explosive plays. They also blitzed often and well, including this one when Wilson’s option to throw the ball away was pitifully unavailable.

Jabril Peppers with his second sack of Russell Wilson—dipped under first man and paid Chris Carson back after getting run over earlier. #Giants pic.twitter.com/8Z2CmeSOEL

Besides a smart Giants game plan, Wilson was further hindered by a running game that had RBs Chris Carson and Carlos Hyde present but less than 100 percent because of foot injuries. Hyde ran twice for a yard.

“We need to get (Carson)  back to full load,” Carroll said of Carson’s 15 carries and 65 yards Sunday. “I’m not gonna overdo it . . . the main thing will be Chris feeling like he can go and he can take all the load.”

The offensive line’s numerous mishaps might be helped this week by the return of RT Brandon Shell (ankle). Because of injuries to backups, the Seahawks were down to fourth-stringer Chad Wheeler in the fourth quarter.

Whatever is hampering Wilson and the rest of the offense, Carroll sounded eager to make the Giants’ embarrassment the period at the end of a bad sentence.

“This is the freakin’ championship run right here,” he said of the final four regular-season games. “It really feels like this season starts all over again right now. it’s a great fourth quarter coming up if we can make it so.”

It’s always worthy to look around the NFL to find numerous examples of other good teams who do face plants. The Denver Broncos, another team that was, like the Giants, 4-7 entering the game, took it to defending champion Kansas City before losing, 22-16. Monday, a third 4-7 team, Washington, did win, handing the Pittsburgh Steelers their first loss, 23-17.

In the densely packed NFL, The Seahawks’ loss, however gruesome, was hardly one of a kind. And the Jets are an nearly an ideal opponent to begin the clean-up of various messes. There’s lots to do.

Starting with persuading the QB not to deliberately throw away scoring opportunities, no matter how annoying was his day.