Now that the Seahawks have their dope-slap game out of the way, fans can look forward to the Dec. 27 game vs. the Rams. For the rematch, the Seattle offense will be armored up. 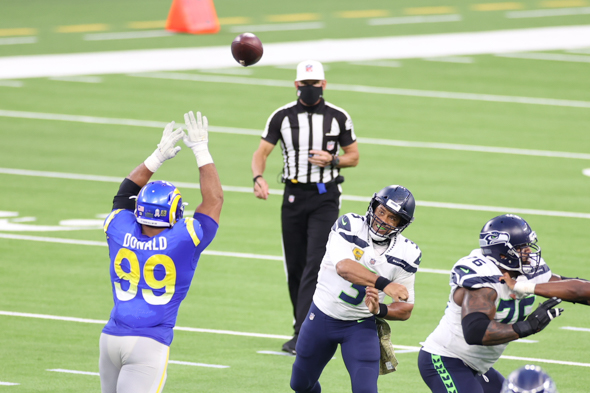 Next time Russell Wilson sees Aaron Donald, he expects to have Josh Gordon as a target. / Drew McKenzie, Sportspress Northwest

As regards December, the essential directive for the Seahawks is to do all that it takes to win the Dec. 27 game home game against the Los Angeles Rams, who have won five of the past six in the series. Everything else is a means to that end.

Yes, fans have been schooled as recently as Sunday that it is unwise in the NFL to overlook the underdog. But it is part of human nature. Pete Carroll has said a few times that one of his principal tasks is to coach against human nature. He seems to have done it well.

The rest of us can play two games ahead.

The 17-12 loss to the Giants was not a result of taking the Giants lightly; it was a matter of the coach being out-strategized.

Now that the Rams have matched the Seahawks record atop the NFC West at 8-4 and own the tiebreaker because of the 23-16 win in the first meeting, the Seahawks have out of the way the dope-slap that seemingly occurs annually during the regular season with nearly every contending team.

You may have forgotten that in the 2013 season that produced a championship, the Seahawks had to go to overtime to beat 0-7 Tampa Bay, 27-24. Yes, that Seattle team won its dope-slap, and the 2020 Seahawks lost its dope-slap. So I’m saying this year’s team isn’t as good as the title team. Breaking news.

This year’s team is, however, good enough to beat the 0-12 Jets Sunday at home and the improving 5-7 Washington Football Team on the road Dec. 20, setting up the second disputation with the Rams. One regular-season game remains Jan. 3 at Santa Clara, or wherever the NFL vagabonds call home by then, but 2020 is destined to be the year that the 49ers are the most cursed team in football.

As far as Sunday, when Carroll hopes to have back RB Rashaad Penny, RT Brandon Shell and CB Quinton Dunbar, the popular theme this week is a revenge game for former Jets star SS Jamal Adams, who in July bullied his way off the woebegone franchise and was traded for massive Seahawks treasure.

Revenge game? How does anyone have revenge against an 0-12 team? It’s like Karl Malone posting up Danny DeVito. There’s no “take that!” moment possible.

It’s true that the Jets would have beaten the Raiders Sunday if, on the final Las Vegas play, they had played prevent defense instead of blitzing. That subsequent game-winning score turned into a fireable offense for defensive coordinator Gregg Williams, one of the most odious coaching characters in the NFL. But the Jets had their one shot at a win, missed, and someone had to pay.

Besides, Russell Wilson owes himself and his teammates a game. That point was established indirectly Wednesday by Carroll, who praised the offensive line for their work against the Giants despite having given up five sacks and 10 QB hits.

“I came out of the game feeling like the guys protected well,” he said. “We needed to get more production out of our opportunities. We really had chances. We were trying to get the ball down the field more than allowed; we just need to adjust and take advantage of what was available to us.

“But the protection was solid, even providing that we had a couple guys in there that haven’t been playing a lot.”

That says to me: Russ, you’re up Sunday.

So rushing ahead to Dec. 27 — hey, it’s Christmas, everything is overdone — more intrigue has been created for the rematch.

That will be the first game back for WR Josh Gordon after his year-long NFL suspension for violating its drug policy. Although he’s not allowed to play the next two games, his first official day back at VMAC was Wednesday for practice. He tweeted his delight.

1st day out! 😂 I’m excited as hell to be back amongst the family like this, you have no idea🙏🏾 Can’t wait to contribute.
#Seahawks #thankful

Carroll Wednesday said the integration of Gordon would be much quicker than a year ago, when he was waived by New England and picked up by Seattle in mid-season. He caught just seven balls in four games before NFL testing detected his re-lapse, brought on in part, according to his agent, by the death of his brother on Nov. 11, 2019.

“I’ve talked to Josh — it’s really important that he really bust it right now,” he said, “so that when he does get out, there’s not a lag time of him adapting. He’s got to get it done now. There’s just not much time left.”

Carroll thinks it’s not asking too much for a guy, 29, who’s been a pro for six seasons.

“From our side of it, and from Josh’s side, we’re much more familiar now,” he said. “We have spent much more time with him. We understand his physical abilities, and much more so, how he learns. We understand how much he wants to be a part of this thing. So we start way faster than we did last time around.

“I know he’s very sincere about this. We’re going to help him in every way to make sure that he can get what he wants out of this deal.”

On Carroll’s side of the deal, he wants on Dec. 27 the chance to send the 6-3, 225-pound Gordon and the 6-4, 229-pound DK Metcalf on go routes to the end zone and Tyler Lockett underneath on a crossing route.

He’ll have a hard time not glancing across the field to see the look on the face of Rams coach Sean McVay, who has only one Jalen Ramsey.