A long, hard year ended on a long, bad night in Columbus, as the Crew dominated the Sounders 3-0 for the MLS Cup. “A failure,” said coach Brian Schmetzer. 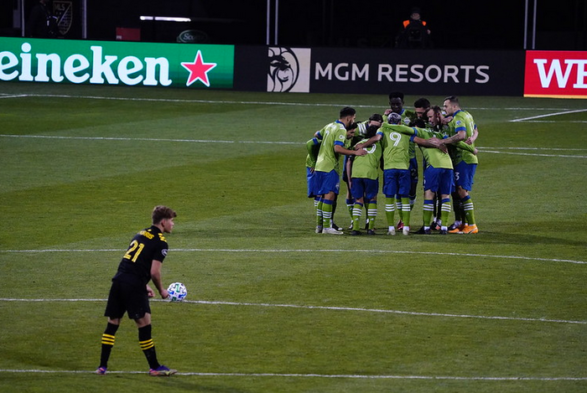 All night long in Columbus, the Sounders couldn’t figure out what was going on. / Mike Fletchner, Sounders FC Communications

The Seattle Sounders hoped that Saturday’s MLS Cup final in Columbus would herald their arrival as a dynastic force in league history by winning consecutive league championships and a third title in five years.

Instead, a 3-0 drubbing at the hands of the Columbus Crew served as a curt ending to a disrupted season.

Sounders coach Brian Schmetzer elected to use the same starting lineup for the fourth consecutive match, including the club’s dramatic comeback in the Western Conference finals Monday.

The decision included playing Alex Roldan — who prior to 2020 played his entire career as a midfielder — at right back over Kelvin Leerdam. Joevin Jones started on the right wing, pushing Alex’s older brother, Cristian, to start in the holding midfield over Monday’s hero, Gustav Svensson.

From the opening whistle, the presumptive favorites were unable to match the hosts’ intensity. Columbus pressed all over the pitch, winning the ball and driving relentlessly toward Seattle’s goal.

The Crew scored 25 minutes in, when Harrison Afful swung a cross to the left post for Lucas Zelarayan, whose first-touch shot ricocheted off keeper Stefan Frei and trickled into the net.

Six minutes later, Columbus scored again. Zelarayan trapped the ball out of the air and drew defensive pressure, before laying it off to Derrick Etienne at the left post. Alex Roldan rushed to cover the open man, but Etienne curled a shot across the face of goal to beat a diving Frei.

Off the crossbar from Jordan Morris! pic.twitter.com/c5DPyjTXCE

“They couldn’t find their rhythm in the game,” Schmetzer said. “Going one goal down was
OK, but going two goals down was a dagger.”

Both goals saw Roldan out of position, though he was left without defensive cover after pressing out on the wing on the first goal, and had to sprint 30 yards back when he realized Zelarayan was unmarked.

The second-half introduction of Svensson, Leerdam and Brad Smith — all of whom started in the club’s 2019 MLS Cup triumph — brought something of a spark to Seattle’s efforts to find a goal, but the club was too deep in the hole and failed to generate any meaningful action in the final third.

Zelarayan added the final insult in the 82nd minute, smashing a rising shot into the upper left corner to render the final minutes nothing more than a formality. When referee Jair Marrufo blew the final whistle, Seattle had three shots on goal, with the best effort having been swatted away from the upper corner by Columbus keeper Eloy Room after a
Jordan Morris header in the 80th minute.

Schmetzer refused to saddle the blame on a single player:

“The whole team was flat. I absolutely think that this game was a failure. This individual game was not a good performance by our club. It’s not up to the standard that we set for ourselves. It’s my job that the players are prepared and that they have the tools to be successful.

It’s not a good way to end the season, But I would say that the team came through some adversity and made another final back-to-back, which is difficult to do in a league like MLS.”

Schmetzer defended his choice of starting lineup, citing a nagging hamstring injury for Leerdam and Svensson’s recent return to team activities after recovering from COVID-19.

“I don’t second-guess myself,” he said. “I try to learn. After the Minnesota game, you put those guys on and you win 3-2, and you’re the greatest coach ever. You put these guys on and you lose 3-0 in an MLS Cup final and everyone’s questioning your lineup.

Ironically, the off-season always feels the longest for the team that comes up short in the big game. As Seattle turns its attention to the 2021 season, they have reason to be confident that the core of their team will return. Only two major contributors’ contracts are set to expire: Svensson and Brazilian midfielder João Paolo, who is on loan from Brazilian side Botafogo.

The murkier question surrounds Schmetzer. Out of contract at the end of the year, the Seattle native has been publicly confident that a new deal will get done, but has acknowledged that he feels capable of replicating his success elsewhere.

Schmetzer’s words are a pointed reminder that the Sounders have reached four MLS Cup finals in five years under his guidance, winning two. For all its offensive prowess, though, Seattle has often failed to score on the league’s highest stage, having been shutout in three of those appearances.

The Sounders have managed the rare sporting feat of being perennially successful for more than a decade. Still, the club has always claimed to set its sights on being great, not just good. In a title-obsessed world, Saturday’s loss will serve as a headstone for the season of a good team, not an eternal monument to the legacy of a great one.