Thiel: A wealth of RBs for Seahawks, not a dearth 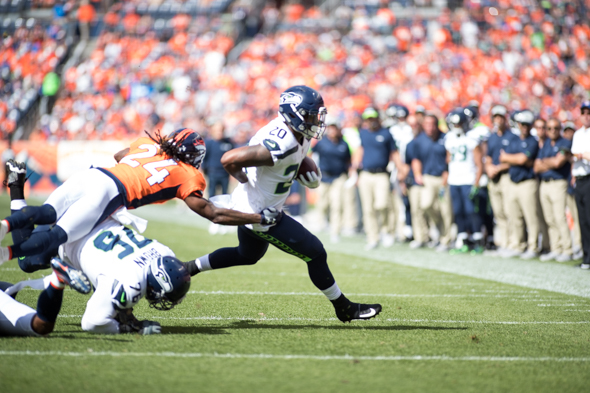 In December, there’s two kinds of bad luck in the NFL — the draw, and health. The draw is the schedule — who (and where) the games are played. Health is, of course, who on the roster remains ambulatory after months of cudgeling, thumping and clobbering.

For the final three games of the 2020 regular season, the Seahawks have the misfortune of drawing three of the top five defenses, based on yards allowed, starting Sunday in Washington.

In 2019, the bad luck was health. Over a period of eight December days, the Seahawks lost to injuries their top three running backs, Chris Carson, Rashaad Penny and C.J. Prosise. Subsequent desperation was such that Marshawn Lynch and Robert Turbin were called off their respective couches to come play a little emergency ball.

Compelling as was the theater, the practical results were modest. In the final three games, one regular season and two playoffs, Lynch had 67 yards on 30 carries. He did get four touchdowns on short-yardage rushes, but the sentiment of his unexpected return was more than the reality.

So if I were asked (and I am asking) to choose which form of bad luck is preferable, I would take the hazards the 2020 Seahawks have been dealt. The Seahawks offense at least has the weapons to game-plan its way to 20 points or so against the premium stoppers, then rely on Seattle’s recovering defense to hold to three runs or less over six innings for a quality start.

A year ago, there was no game-planning around the injuries.

They lost their final two regular-season games to Arizona and San Francisco, beat the Eagles in Philadelphia in the playoffs only because they were more broken down than the Seahawks, and reached seasonal expiration at Lambeau Field against a better team.

“Last year was tough,” Wilson said Thursday, recalling that LT Duane Brown also lost three games with a sore knee. “We had lost some great players along the way — all your running backs, great football players who can score touchdowns and do a lot of things.”

In contrast, Sunday will be the first seasonal appearance for Penny, who has taken a year and a week to recover sufficiently from ACL surgery to be in position to play. He was put on the active roster Saturday (along with DT Damontre Moore) after showing out during two weeks of practice.

He looks terrific,” offensive coordinator Brian Schottenheimer said Thursday. “He’s looking fast, he’s looking explosive. I think he just looks as good as you could expect him to. I think he’s getting really close to being ready to go.”

“I’m super excited for Penny,” he said, “just how hard he’s worked his tail off to get back from the injury and how confident he’s looking.”

Adding Penny with a healthy Carson and seasonal newcomer Carlos Hyde makes for the opposite condition of a year earlier — a wealth of running backs instead of a dearth. The strength of such a virtue played out in 2019 in the week 13 game against Minnesota Dec. 2, before the sorrows.

With 226 net yards passing from Wilson (21 of 31) and big games from the Carson/Penny tandem — Carson 102 rushing yards, Penny 74, and combining for five catches and 40 yards and three TDs — the Seahawks won 37-30, a season-high point total for a four-quarter game.  That was the game that ignited optimism for a lengthy sequester in the postseason.

Easily forgotten from last season is that Penny averaged a team-high 5.7 yards per carry. Carson, voted as one of the NFL’s top 100 in a preseason poll of NFL players, is one of the game’s most complete backs.

“He can catch, run and block,” Wilson said, “and you want guys like that when you’re trying to win a championship. The important thing is that we want guys (able) to keep everything rolling.”

It wasn’t that long ago that the Seahawks had another shudder at the position, when they had to fetch off the street free agents Bo Scarbrough and Alex Collins to survive Carson and Hyde being down simultaneously.

But that was then. The now is about armoring up for three good defenses in a row.

“Now that we’ve returned the running back position that was in trouble for a while, here comes Penny,” coach Pete Carroll said. “In general, we’re in pretty good shape.”