From a trot to a taut game, Seahawks prevail with the September trick of late defensive heroics, then watch as Rams spit up. There arose such a clatter in the NFC West . . . 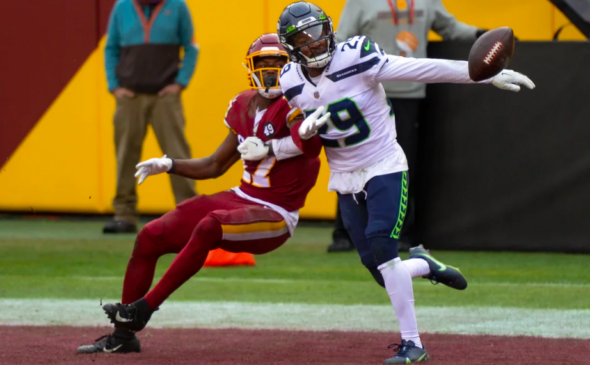 Some young fans growing up in the Seattle-area market probably take the achievement of the NFL playoffs as a birthright. Jamal Adams, a 24-year-old kid, is not among them.

“Hell, yeah!” he shouted from the Zoom podium. It was plain to see it was his first time on the NFL zipline thrill ride.

We hear you, man. Three seasons with the New York Jets. Man, this is Seattle stuff is different.

Although it almost wasn’t.

Blowing a 17-point fourth-quarter lead is something the woebegone Jets might do. But in  the Pete Carroll tenure in Seattle, it would have been a football sin nearly unimaginable.

The Seahawks gave up touchdown drives of 96 and 64 yards, and were 49 yards and 14 plays into what could have been the decisive score, from a 5-7 Washington Football Team  missing its starting quarterback and running back.

Yet somehow, the Seahawks replayed their September script of final-play defensive desperation into a 20-15 win (box) to clinch their eighth playoff berth in the past nine seasons.

Carroll called it “sweet.” Most witnesses saw little but sweat.

Whatever your choice of perspective, both were preferable to the the position held by fans of the Los Angeles Rams. A couple of hours after the Seahawks’ triumph at FedEx Field, Adams’ former team pulled off the upset of the season.

The previously winless Jets astonished the Rams in LA, 23-20 — the same Jets that lost 40-3 to the Seahawks a week earlier, and now have lost their pole position in the race to draft Clemson QB Trevor Lawrence.

Ahead of the much-anticipated NFC West showdown with the 9-5 Rams Sunday at the Loo, 10-4 Seattle finds itself in first place, needing only a win Sunday to clinch the division title. The Seahawks at the moment are the NFC’s No. 3 seed.

Green Bay, which won Saturday over Carolina, is 11-3 and needs to win only one of its two remaining games to clinch the NFC’s No. 1 seed, and with it the only bye in this year’s NFC playoffs. But being division champs would mean for Seattle opening the playoffs at home, rather than the dubious reward of making the wild-card trek back to D.C. to again play Washington, still the leader of the NFC East at 6-8.

Despite missing starting QB Alex Smith, Washington rallied from being routed to nearly being victorious. The players saw little from the Seahawks Sunday that generated much fear for a potential rematch.

After RB Carlos Hyde, on the Seahawks’ first possession of the second half, scored on a 50-yard run for a 20-3 lead, the Seahawks had three three-and-out possessions, one drive for six plays, a fifth ended by an interception, and the final-seconds kneel-down. Wilson finished with a season low of 121 passing yards and a QB rating of 73.2. The Seahawks’ 302 yards of offense was also a season low.

On defense, the Seahawks turned the previously ineffective second-year backup QB Dwayne Haskins into a poor man’s Patrick Mahomes. He led WFT to 225 yards of offense in the second half and a first down at the Seattle 23-yard line with 1:18 left. Had Washington not failed an earlier two-point conversion attempt, they could have been in position for a field goal that, if made, could have forced overtime.

But after expelling not a single hot breath on Haskins for nearly the entire game, the defense had three of its four sacks in WFT’s final eight plays, plus a last-play, fourth-down incompletion after a deep backward chase of Haskins.

“We’ve got to get off the field on third down,” he said. “There’s no way to sugar-coat that.”

Washington converted 10 of 17 third downs, including a third-and-11. Haskins found all kinds of room under Seattle’s squishy-soft zone, completing 38 of 55 passes for 295 yards, including 13 to TE Logan Thomas for 101 yards. That’s part of the price to be paid for allowing a strong safety, Adams, to have a big role in rushing the passer.

On the other hand, it’s worthy to acknowledge the offensive deed of the day — despite the ferocity of Washington’s defensive line, Wilson went sackless, with only three QB hits. He also outsmarted his tormentors with 52 rushing yards in six carries. It happened behind LG Jordan Simmons and RT Cedric Ogbuehi, backup linemen filling in for injured starters.

The trend of defenses denying Wilson’s trademark explosive plays — his longest completion was 15 yards —  doesn’t seem to be an affront to his ego, even if Carroll referred to his play Sunday as a “Bart Starr kind of game.” (Look it up, kids.)

“It’s not about me, it’s about us,” Wilson said. “We can always do some great things. Whether it’s a quick doing, deep doing, a mid-range. All the things that we’re able to do, it makes it really difficult for defenses. I don’t think it’s a new thing that I can throw deep.”

However the schemes manifested, they worked just enough. Particularly in light of the Rams’ debacle in LA, there is little possibility Carroll will let shortcomings take away from the significance of Seattle’s feat, no matter how ungainly and harrowing.

“It’s a really big deal,” he said of his ninth postseason in 11 years in Seattle. “Ten wins is a marker too. I made a comment in the locker room that the young guys that have never been in it, they can’t appreciate it like the guys who have been around the league who come play with us and try to be part of something that is different than what they’ve been having.

“I’m really happy about being able to share with them. It’s a good day.”

Adams, in his fourth year, is chief among them.

“I’m not used to this — I know you guys are,” he said to reporters. “Seattle, you know, always goes to the playoffs. I’m used to sending my cars home by this time. I’m already packing up, learning where’s the vacation, when am I seeing family?”

He’s also getting used to another Seattle football tradition — the Seahawks don’t have to look good to be good, man. 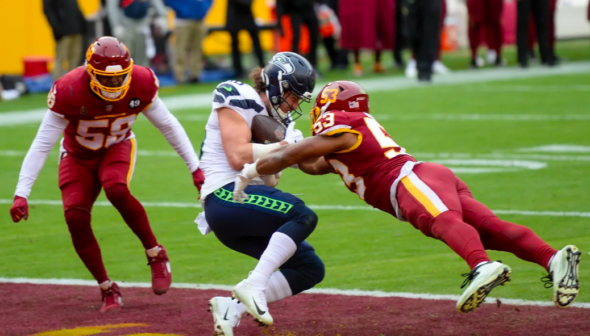 TE Jacob Hollister’s 10-yard touchdown reception put the Seahawks up 13-0 late in the first half. / Reggie Hildred, via Seahawks.com