Thiel: A Penny for thoughts of an NFC West title 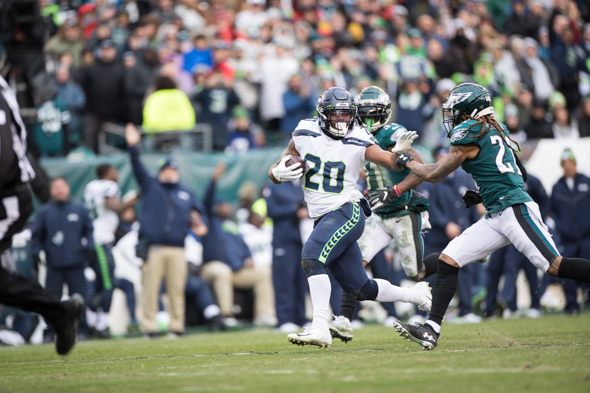 RB Rashaad Penny stiff-arms a defender on the way to a 58-yard touchdown run against the Eagles in Philadelphia Nov. 24, 2019. / Drew McKenzie, Sportspress Northwest

Sports fans are long familiar with recovery stories of athletes rehabbing from injury, none greater than the one this year with Washington Football Team’s QB, Alex Smith, returning to start this season after 17 surgeries to repair a leg broken gruesomely in 2018.

Comparatively, the return of Seahawks RB Rashaad Penny after repair of an ACL torn one year ago is, as these things go in pro sports, fairly standard. But pain isn’t a comparative stat. Nor is joy. They just are.

To hear Penny speak Thursday of his first chance to play the past Sunday . . . well, maybe his response was being filtered through a sentimental lens of Christmas Eve, but the dude radiated elation. It was fun to see.

I’m just ecstatic to be back,” he said, beaming, to a Zoom screen of reporters in his first interview since the Dec. 8, 2019 knee injury against the team he faces Sunday, the Los Angeles Rams. “I miss these guys. I miss playing football. So now, my first time back on the field, all I did was smile. Every play, even if it was was a fake. I just was on a route,  smiling, just happy to be back out there. Just me being who I was — always a smile on my face.

As should we all.

A year ago, Penny had just turned in the best back-to-back performances of his first two seasons, after being a debatable first-round draft pick in 2018 because the scouting consensus was the Seahawks over-reached.

He followed a 129-yard rushing performance on 14 carries at Philadelphia Nov. 24 with 74 in 15 against Minnesota, plus 33 yards on four receptions. Things were looking good for the Seahawks offense with production from the backup runner behind starter Chris Carson.

But on Penny’s first play in a game the Seahawks would lose 28-12 without an offensive touchdown, his reception on a swing pass went for 16 yards — and a clean tackle that put Penny on the shelf for a year.

It was the start of injury dominoes that would in the next week take out for the season  Carson (cracked hip) and third-down back C.J. Prosise (broken arm), as well as a knee problem for LT Duane Brown that would cost him three games.

The Seahawks pasted things together, partly with the surprising return of Marshawn Lynch, to reach the second round of the playoffs. It was merely skilled work with smoke and mirrors, and luck.

But that was then. The now was Penny’s first team flight in a year, to Washington, D.C., Friday. In the 20-15 win, he had two carries. It was enough.

“I told the guys I was so happy with traveling, because I was just happy just to be back around that feeling,” he said. “Just watching the game from a first-hand experience instead of watching on TV every weekend, it was a blessing.”

Offensive coordinator Brian Schottenheimer said there was a plan for a few more carries, but it didn’t matter to Penny.

“He came up to me after the game, and he was thrilled,” he said. “It was a thrill just to be out there. I’m happy for him.

“I remember him texting me back in May, saying how hard he was working, and just, ‘Wait coach, just wait.’ It’s been a really cool journey for him to see him get out there.”

With Carson and seasonal newcomer Carlos Hyde healthy, Seattle’s offensive outlook is markedly different than the Nov. 15 game in LA the Rams won 23-16. Because of injuries, the running backs that game were street free agent Alex Collins (43 yards) and and rookie DeeJay Dallas (eight yards). Wilson led Seattle on the ground with 60 yards.

Besides yards, backs have pass protection jobs, which didn’t work out well, either; Wilson was sacked six times and hit 12 times.

“When you’re playing one of the best teams in the game like the Rams, with those kind of match-ups, the experience definitely helps,” Wilson said Thursday. “I don’t think it’s an end-all, be-all kind of thing, but it helps with all the pressures and looks. Chris and Carlos obviously have played so much football over the years.

“So we have a great of stable running backs and we’re really excited about them stepping up.”

Carroll won’t forecast carries for his backs, but having three strong runners against the NFL’s best defense gives him options he hasn’t had all season.

“We’re not gonna just dump everything on (Penny) at this point, but he’s ready to take the next step,” he said. “He came out confident, feeling good about it, which is a lot to accomplish in the first game back after that long haul.

The full-house backfield on offense and the returns on defense of CB Shaquill Griffin and DE Benson Mayowa, neither of whom played in the first game, and a full game from DE Carlos Dunlap, are difference-makers that make the Seahawks will be NFC West champs by Sunday afternoon. Seahawks 23, Rams 20.