RT Brandon Shell, who didn’t test positive for COVID-19, was in contact with a non-team-member who was, so must sit five days. He could return for the playoffs. 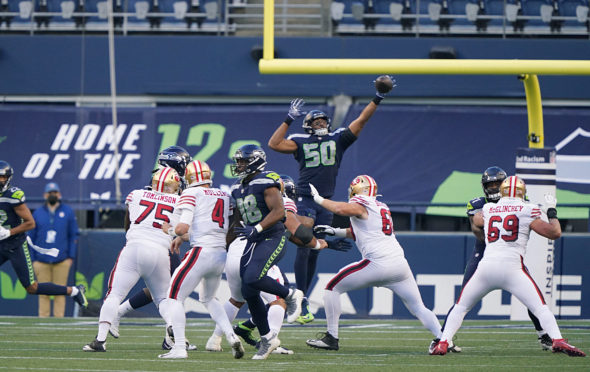 It took until the final weekend of the regular season, but the coronavirus caught up to the Seahawks Saturday, previously the only NFL team that had skated past the troubles. The club put starting RT Brandon Shell and backup FS Damarious Randall on the reserve/COVID-19 list, a seasonal first for players on the active roster.

They will miss Sunday’s game with the 49ers, but in Shell’s case, he could be back in time for the playoff game next week. Coach Pete Carroll said Friday that Shell did not test positive, but was in close contact with a non-team-member who was positive. That means he must sit out for five days minimum, and can return on the sixth day if he tests negative.

Carroll was not available to media Saturday, but on Friday said Shell was being monitored.

“He’s tested negative, but we’re just monitoring it to make sure he’s OK, so he wasn’t out (at practice) today,” Carroll said. “We didn’t have him on the field. It’s a developing situation we’ve got to figure out. He’s tested clear, but somebody that he’s worked with hasn’t, outside of the program, so we just got to make sure he’s OK.”

Shell already had missed four of the previous five games with a sprained ankle, and was not fully cleared to return from the injury. He will be replaced by Cedric Ogbuehi, who has drawn praise from Carroll for his recent play as a starter.

Randall, primarily a special-teamer, was not mentioned by Carroll. He was listed Friday as questionable (ankle) and had missed the two previous games. His status was also listed as non-injury related, likely meaning the virus.

The Seahawks made two other roster moves Saturday. CB Tre Flowers was returned to the 53-man active status from a three-week stay on injured reserve, although he’s not likely to bump D.J. Reed from the starting job. And after a week lost to an illness that Carroll said was the flu and not the virus, RB Carlos Hyde was declared out for Sunday, meaning more time for Rashaad Penny behind starter Chris Carson.