Against the broken, 6-9 49ers, the Seahawks were down 10 in the 4th quarter, yet won. Is the high drama sustainable against an opponent for the third time? 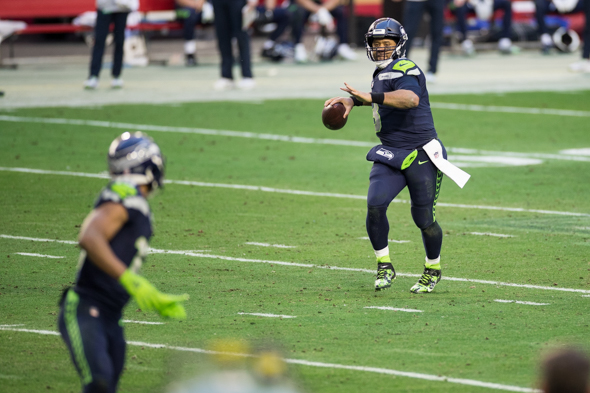 The Seahawks entered play Sunday against San Francisco at their desert rental in Arizona with a chance to improve their position from the No. 3 seed in the NFC playoffs to second or first. But since the Packers and Saints, playing at the same time as Seattle, claimed the higher spots with easy wins, the Seahawks-Niners outcome, regarding seedings, became moot.

So the game watered down to style points. The Seahawks’ style was dirty overalls on a highwire. They made it across safely, but looked kinda funny.

The reward was no different: After rallying from 10 down in the fourth quarter, the Seahawks’ 26-23 triumph (box) drew a home game against the Los Angeles Rams in what amounts to the best-of-three seasonal rubber match at 1:40 p.m. Saturday (FOX).

But for three quarters, Seattle fans, hands over mouths, looked up to see wobbling, weaving and wavering. Even the two brilliant touchdown throws from QB Russell Wilson didn’t un-furrow the brows of many observers.

Judging by the answers he gave as he took post-game questions on Zoom, coach Pete Carroll seemed a bit miffed at the skeptics.

“I’m not worried about whatever you guys are worried about,” he said. “It’s a little frustrating. We are going to keep playing, try to play really good football, not give it to them, and play championship ball and see how far that takes us.

“The games look, to me, like there’s a patience to it that nobody wants to see, but that we’re feeling OK about it. We just have to make sure we get the points we need to win.”

On the one hand, he’s right. However it gets done against a division rival, it’s good.  Finishing with a four-game winning streak, they are 12-4, the juiciest part of which is going 4-2 in the NFL’s toughest division.

For the ninth time in 11 years under Carroll, and for the 14th time in the club’s past 18 years, they are in the postseason. They played well enough to earn a game at home, where they are 6-0 in playoffs under Carroll. Their 459 points scored is the most in club history, and the defense in the second half of the season metamorphosed into one of the league’s best.

All done against the backdrop of a national health calamity that the Seahawks, by dint of their strenuous labors, have almost completely avoided.

On the other hand, Niners third-string QB C.J. Beathard came dangerously close to a victory, despite operating a broken team whose starters have lost 139 man-games to injury and, at 6-9, had no stakes in the outcome. The Seahawks waited until 11 minutes were left to score a touchdown, and their final TD was scored by a fourth-string running back, Alex Collins, who spent the past two months on the practice squad.

“Today we were able to do that again.”

At that, Wilson is the best at that sort of thing. As with the second Rams game Dec. 27, the Seahawks were tied at 6 at halftime, then pulled away in the second half for a 20-9 win. Wilson in his career has won 35 games after the Seahawks trailed in the fourth quarter or overtime.

But reliance on the narrow margin grows more dangerous with each round of the playoffs.  Wilson knows that well. But as long as he works for Carroll, the risks of the deep passing game he loves are going to be avoided.

Asked directly what he thinks the offense needs more of entering the playoffs, Wilson was clear.

“I think we gotta get to those more explosive plays here and there,” he said. “I think that any time you get those explosive plays, it definitely helps. We gotta get to some of those calls and some of those moments. But at the same time, the players know what matters — do you win the game or not. That’s really what we care about in this locker room.”

In fact, the Seahawks’ two long TD drives in fourth quarter had just one explosive play each. The first drive included a 20-yard catch-and-run for TE Will Dissly, and the second drive had a 16-yard scramble by Wilson. The third TD drive was just 17 yards  after a strip-sack of Beathard by DE Benson Mayowa and a fumble recovery by DE Rasheem Green set up Collins’ eight-yard run (he found himself in the game as Chris Carson rested, Carlos Hyde was home sick with the flu and Rasheed Penny cramped up).

Not exactly the pass-game pyrotechnics of the 5-0 start. The Seahawks rushed for 91 yards in the fourth quarter, and threw for 80.

For the game, Lockett had 12 catches, making 100 for the season, breaking Doug Baldwin’s 2016 single-season record, but gained a modest 90 yards. DK Metcalf broke Steve Largent’s 35-year-old single-season record for yardage, but had only 21 Sunday on three catches.

Respect from an all-time great. 🤝

Steve Largent shares a congratulations message to @dkm14 as DK breaks Largent’s franchise record for most receiving yards in a single season. pic.twitter.com/WQVX0Skq6j

So the Niners did what the Rams did, and Giants and Washington too — play a lot of two safeties high and make the Seahawks move in increments, not explosions. The Seahawks have responded by winning anyway, in large part because of no turnovers,  good defense and good special teams.

“To get through another game and not give it up, just makes all the difference,” Carroll said. “We were plus-one for the day with a great sack that caused a fumble. That is such an important part of our football — always has been and always will be.

“We’ve worked really hard to not get desperate, and not take shots where we don’t need to, to try to force the issue . . . we have an explosive mentality in this program. When it doesn’t happen, we get frustrated too, because we want to happen that way, but we’re just trying to win the game.

“We gotta hit ’em when we get our chances.”

Looking ahead to Saturday, the Rams think they will have back QB Jared Goff, whose right thumb, broken atop the helmet of Mayowa Dec. 27, has been surgically repaired with three pins.

Behind a rookie QB, John Wolford, in his first game, the Rams (10-6) beat Arizona 18-7 to earn the sixth seed. For the second week in a row, LA did not score an offensive touchdown, using an interception return, a safety and three field goals to end the Cardinals’ season at 8-8. The Rams led the league in fewest points and yards surrendered. 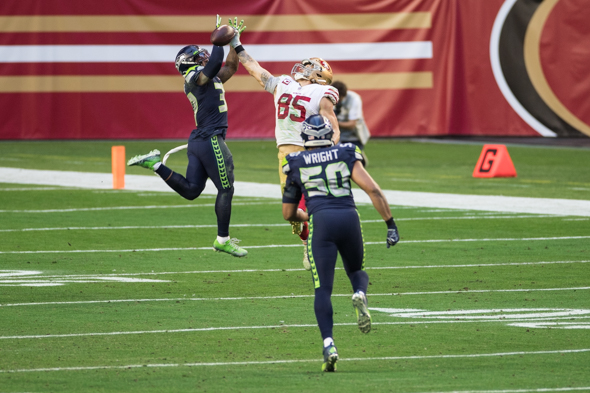