Thanks in part to Tom Brady, Tampa becomes the first Super Bowl host city to have its own team. And it’s only the latest success for the once-moribund sports market. 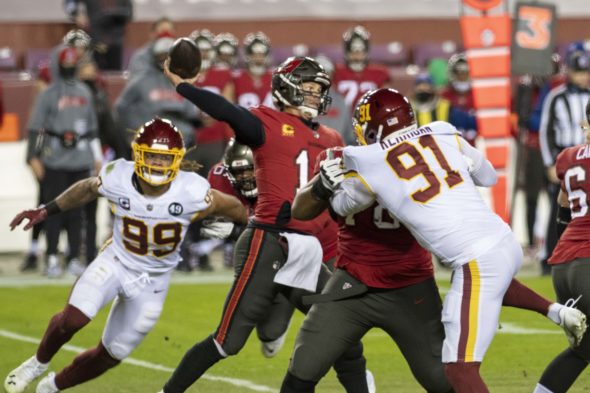 The Tom Brady haters are pulling obliques, hamstrings and biceps in their communal retch over his arrival at another Super Bowl, the 10th for the Anointed One. That’s fine — we all prefer villains for our pretend lives, rather than our political lives.

But if we hold off our Brady annoyances for just a bit, I’d like to offer some attention to the fact that SB LV is the first in which the host stadium has its own team.

Yes, in 1980, the 49ers played in Stanford Stadium, and in 1985, the Los Angeles Rams played in the Rose Bowl. But there’s no quibbling about the perversity of a larger truth regarding the Bucs’ reward — on Feb. 7, few Bucs fans will see it in person.

Yet, it is a better deal than was had by baseball and hockey fans in Tampa.

Three months ago, the Rays made the World Series. And fans watched all six games against the champion Los Angeles Dodgers played in Texas. Four months ago, the same thing happened when the Tampa Bay Lightning won the Stanley Cup — in Edmonton.

It has to be a sports first to have teams from the same market play consecutively in a Stanley Cup, World Series and Super Bowl. But to have all events inaccessible to nearly all of their hometown fans . . .

In the bigger picture of the pandemic, it’s a teensy cruelty. In pro team sports, to be closed out of the pleasure of pinnacle achievements three times in months is a random deed most foul.

Take note, Seattle sports fans: Hang on to the memory of the Sounders’ 2019 MLS Cup won in front of 70,000-plus at the Clink until fingerprints are visible.

Among the lucky are 7,500 health care workers from around the country who have received the COVID-19 vaccine, including at least four from each NFL marketplace. Their tickets are free, and are non-transferable. The cheapest face value of the remaining 14,500 tickets is $9,450, and reach $24,750 on the 50-yard line, 13 rows up.

So between the pandemic and the economics of scarcity, the average school teacher in Hillsborough County has a better chance to see a herd of camels pass through the eye of a needle than see the hometown team win a title in the hometown stadium.

Despite the absence of presence, the advance of the fifth-seeded Bucs after their 31-26 win at top-seeded Green Bay Sunday (box), and the advent of sports success in the Tampa-St. Petersburg, is remarkable.

After so many wretched years, to have the free-agent randomness of the football Terminator ending up in Tampa, is payback for at least some of the historically massive grimness.

They didn’t call them the Succaneers for nothing.

In their first 20 years after joining the NFL in 1976 as Seattle’s expansion twin, the Bucs had three playoff seasons (the Seahawks had four in the same span). The run included 14 consecutive losing records.

After interrupting the pathos with a 12-4 season in 2002 and a 48-21 win over the Raiders in Super Bowl XXXVII, the Bucs did not have another playoff win for 18 seasons.

The streak was broken three weeks ago when they beat the Washington Football Team, 31-23, the first of three road wins in a row to reach the Super Bowl in their two-thirds empty stadium. Since the Bucs were 7-9 last season, and Brady will be 44 next year, I’m guessing this was the unicorn moment that presages another 18-year drought.

Nevertheless, after bolting from New England and Bill Belichick, Brady had no training camp or preseason to work with his new teammates or coach Bruce Arians, thanks to the shutdown for the virus.

Which makes the feat more impressive, no matter his three interceptions Sunday, and no matter whether they sustain it.

Impressive too, was the Rays’ ascension, although their accumulation of young talent had been foreseen for a long while. They won the the American League East bitty season with an AL-best 40-20 record, then beat the Blue Jays, Yankees and Astros to reach the Series against the Dodgers.

With a $28.3 million payroll, the Rays lasted six games against the Dodgers and their $108 million payroll (salaries pro-rated because of the pandemic). The Rays’ lineup added together might be 43.

The largest sports success in Tampa rests with the Lightning, which won the bubbled-up Stanley Cup 4-2 in Edmonton over the Dallas Stars Sept. 26. It was the franchise’s second Cup (first was 2004), and some credit goes to Tod Leiweke. Lured away from his job as Seahawks CEO in 2010, he became the Lightning’s CEO and a minority  owner. He left in 2015 to be the NFL’s chief operating officer, and has returned to Seattle and his first sports love of hockey to run the expansion Seattle Kraken show.

If you’re scoring at home, that’s a Stanley Cup win in September, a World Series appearance in October, and, at least, a Super Bowl appearance in February. Just for fun, the NBA Toronto Raptors, denied their home and native land because Canada doesn’t want America’s cooties, are bivouwacking with the Lightning at Amalie Arena for at least part of the NBA’s 72-game season.

We the North has become We The South. But at 7-9, the Raptors bring shame to the regal sports scene on Florida’s Gulf Coast, a sports market that has gone from historic ridicule to ridiculously successful in five months. In spite of (or because of?) a pandemic.

It’s good to know some place and some people are having fun. Even if they have to peer through the fence to see it in person.