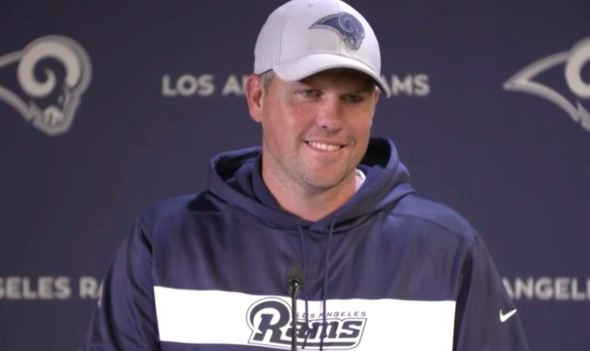 The Seahawks certainly haven’t beaten the Rams much. So they are taking one to join them.

Shane Waldron, for the past three seasons the passing game coordinator with Seattle’s nemesis under head coach Sean McVay, but has never been an NFL offensive coordinator, reportedly has been hired by coach Pete Carroll to replace Brian Schottenheimer.

Waldron is 41. Carroll is 69. Just in case you were wondering whether Carroll was in a mood to take on play-call debates from crustier ex-NFL head coaches Doug Pederson (sitting out the season) or Anthony Lynn (hired for the OC job in Detroit), the answer is no.

Seattle is planning to hire Rams’ passing game coordinator Shane Waldron for its offensive coordinator job, per source. Waldron will take over for Brian Schottenheimer.

Carroll cited “philosophical differences” for jettisoning Schottenheimer in the wake of the 30-20 home loss that made for a one-and-done postseason, thanks primarily to an 11-for-27 passing performance by QB Russell Wilson, his worst playoff game.

Since McVay is the Rams OC/playcaller, it’s hard to know Waldron’s philosophy. Maybe that’s the point — Carroll will hand him one: Run, throw short, be very careful, then throw deep.

A native of Portland and a tight end and long snapper at Division III Tufts University outside of Boston, Waldron has been coaching in the NFL for seven seasons, including McVay’s four-year tenure in LA, in which the Rams are 6-3 against Seattle.

Waldron started as tight ends coach, then became pass-game boss when Matt LaFleur left for the Tennessee Titans, then the Green Bay Packers.

Since Waldron was down the chain of command, it’s hard to attribute much of the Rams’ success to him. He certainly had an intense dose of McVay’s innovative work with multiple motions, and the naked-boot rollouts by QB Jared Goff that made an average NFL quarterback look . . . better. The Rams did things Carroll had to like: their run-to-pass ratio was 56 percent, seventh-most in the NFL  (Seattle was 18th).

The big question is, of course, what does Wilson think? Slightly bigger question: Did Carroll engage Wilson in the selection?

Based on his Zoom post-mortem with reporters two weeks ago, that’s what the Wilson seemed to think would happen.

“I’m super excited about being in the mix,” he said. “Going into the 10th year in my career, it’s a critical time. The next 10 years are super critical for everybody involved, the whole organization including myself as a player, and the legacy that I want to leave. It’s vital, it’s critical, it’s super-significant that I’m a part of that process. Coach and I have definitely been talking about it.

“As a quarterback, it’s imperative to my career, and how far I want to go as a player. That’s something I’m really dedicated to having those conversations and communicate all that.”

Wilson did not agree with Carroll’s decision to pop Schottenheimer. Nor was he happy about the clamps applied to the playcalling after turnovers began spoiling the franchise’s best-ever 5-0 start, in which Wilson was allowed to go bombs-away. Post-season, Carroll was clear that his priority was to run “more and better.”

For his part, Wilson sounded as if he wanted more boom than rumble in a new OC.

It appeared that things between Schottenheimer and Carroll came to a head in the fourth quarter of the wild-card game. Down 23-13, the Seahawks were prepared to go for it on fourth-and-1 at midfield. But they were called for a false start as the 40-second play clock ran out, despite having an injury pause to discuss strategy.

The Seahawks hadn’t converted a third down until the middle of the third quarter, and finished the game 2-for-14, so tension likely was high. Carroll said he “got involved” in the call, which is the head coach’s prerogative. But the over-rule was so late that the change messed up the snap timing.  The Seahawks then punted away the final real chance to stay in the game.

Since we haven’t heard from Schottenheimer, and Wilson wouldn’t point a finger, we don’t know exactly what transpired. What is known that beating the Rams’ defense is hard enough without coaches squabbling over plays as the clock dwindles.

That isn’t Waldron’s problem. What he has to worry about is getting the side-eye from Wilson, who sees a rookie NFL playcaller succeeding his pal who helped set the franchise single-season record for points.

But if you’re scoring the off-season at home, so far it’s Seahawks 1, Rams 0.