In his first local press conference, new offensive coordinator Shane Waldron parroted Carroll maxims almost word for word. But that may be merely means to an end. 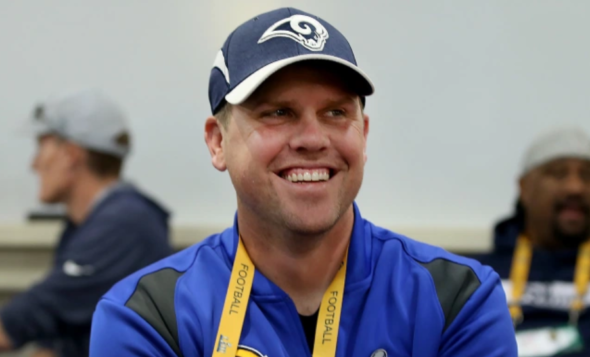 Shane Waldron was a happy guy at the Rams appearance in the 2019 Super Bowl. / Boston Herald

Listening to Shane Waldron talk about Pete Carroll’s football truths, he sounded almost like an idolatrous son. And since Carroll recently waved good-bye to his son/assistant coach, Brennan, who left the Seahawks to become offensive coordinator at the University of Arizona, that makes a lot of pop-psychology sense.

Waldron got his NFL start in New England working under Bill Belichick and Tom Brady for five years in two stints. So he’s well over the idolatry phase of his career.

“When he got the job with the Patriots, he moved from Boston out to Foxborough just to make sure he could be in the office by 6 a.m. every day,” Waldron’s real pops, Jay, told longtime Portland sports columnist Dwight Jaynes. “Hard work can do amazing things for people. He’s always been a hard worker. Whether it was in school, playing football or with a job.”

After Carroll sought out Waldron to leave the Los Angeles Rams and fill Seattle’s offensive coordinator vacancy, Portland native Waldron seemingly had memorized parts of The Book of First Carrollians.

In his first Zoom interview with local reporters Tuesday, Waldon answered questions with these familiar psalms:

” . . . there’s no greater statistic that leads to wins and losses than turnover differential . . .”

” . . . not just saying you’re gonna compete, but making everything that you’re doing every day some form of a competition to look to improve . . .”

Whether coincidental or deliberate, it doesn’t really matter. Waldron is with the Seahawks and not the Rams. That should thrill the 12s because Waldron’s two most significant previous NFL employers, the Rams and the Pats, delivered the two most painful playoff defeats in Carroll’s tenure.

The Pats’ win, you know; the Rams win, you’re still feeling, 30-20 on Jan. 9 at the Loo. Actually, you’re probably still feeling both, which means it’s a good time to connect the two.

Both were lost because each offense was predictable.

Belichick in the Super Bowl knew from the Seahawks’ personnel and formation that they were likely to throw a slant to the right-side receiver, and had practiced defending the play the previous Tuesday. The Rams defense, specifically CB Darious Williams, knew from film study that when WR DK Metcalf went left in motion toward bunched receivers that a screen pass was coming to him.

Both passes resulted in Seattle-world-rocking interceptions of Russell Wilson, one to save a touchdown, one to make a touchdown.

While Waldron had little public profile among more casual fans, he has the rare, exotic markings from the Belichick/McVay coaching tree, which often bears the fruit of offensive unpredictability.

“(I’m) just very fortunate to be around those two guys,” Waldron told reporters before the Rams-Patriots Super Bowl. “They’re both unbelievable football minds. Coach Belichick, obviously for a long, long time, has just done an unbelievable job sustaining success. Sean’s been able to create a culture and get everyone on the same page in a pretty short period of time. He’ll be doing it for a long time.”

McVay will be doing it without Waldron, as well as another Rams coach, Andy Dickerson, the offensive-line assistant.

Brennan Carroll’s departure created a vacancy that Waldron was happy to help fill.

“(Carroll) asked, ‘Hey, is there someone that we can potentially bring with you that would  be instrumental in helping you in this transition?'” Waldron said. “My first thought was Andy, and then it timed up, with the way everything worked out. He’ll come on board as run-game coordinator.

“It’s a chance to blend with (O-line coach Mike Solari) and marry everything that we want to do together.”

The addition of Dickerson, the longest-tenured Rams assistant at nine years, might be a less-appreciated bonus. A feature of the Rams’ offense perpetrated by Waldron and Dickerson is its ability to run so many variations off a small number of formations, including finding receivers in open spaces on shorter routes to gain yards after catch.

That means the Seahawks O-line won’t have to pass-block as long per play, presuming Wilson deigns to unload more quickly.

Perhaps the most interesting thing Waldron said was in response to a question about the virtue of creativity in an OC, a job he’s never held in college or NFL coaching. He said he watches closely the developments in high school football.

“Some of the most creative football is at the high school level,” he said. “Then it trickles up to the college level, then up to the pros. You’re talking about some scenarios in those settings where the playing field is not always equal. In pro ball, everyone is so close, the margin for error so small, everyone’s so similar. Bringing out the best of their abilities is a huge part of (prep ball).

“Having the pulse of what’s going on, where you can say, OK, here’s our core offense, here’s what we’re doing from a system standpoint. What can we do that’s happening (elsewhere) and always stay on the front?”

Now, that is something Carroll has never said.

But high-school chicanery and deception is something the Rams offense has flashed. We know who’s winning that style contest; the Rams are 6-3 against Seattle since McVay arrived, and a big part of why Carroll poached two of his assistants.

Maybe that means Waldron isn’t as much a house man as he seemed after one presser.

The only way to find out is first get in the house, by saying all the right things. Then get the keys to the liquor cabinet. Just like in high school.