Thiel: Wilson’s plan may work for Seahawks too

Russell Wilson has a well-planned media campaign to help get what few athletes earn: Some control. If you missed his words on Seahawks OC Shane Waldron, it’s working. 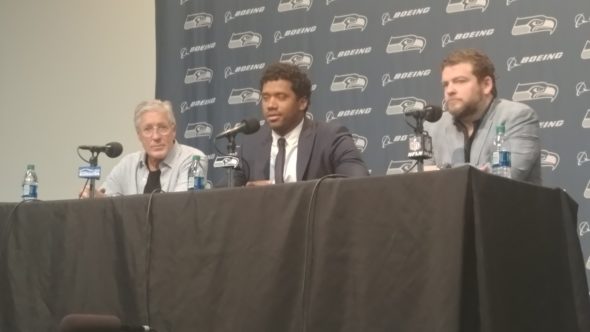 It was April 2019 when coach Pete Carroll and GM John Schneider joined Russell Wilson at the podium at the VMAC to discuss his signing of the then-richest contract in NFL history. / Art Thiel, Sportspress Northwest

In sorting through the latest NFL parlor game, WDRW  — What Does Russell Want? — I remembered an answer to a Zoom question Wilson offered Dec. 17, a few days after the Seahawks beat the New York Jets, 40-3.

That was a high point that seemed to signal a seasonal restoration of a dominant offense, even if the Jets were winless, and spoke well to Seattle’s chances in the pending playoffs.

Little did we know that over the final four games, the Seahawks would score 20, 20, 26 and 20 points, go 2-2 and average 288 yards of offense. Over the 16-game season, that number would have topped only the league-worst average of the Jets (279 ypg).

But in mid-December, offensive coordinator Brian Schottenheimer was riding high enough to have his name in circulation to fill the head coaching vacancy of the Houston Texans. Asked what he thought about his friend becoming an NFL head coach, Wilson unleashed one of his standard hyperbolic gushers.

“I think Schotty would be a tremendous head coach in this game,” he said. “I think he understands the game so well, he’s got that great pedigree (his dad, Marty, who died Feb. 8, had a 200-136-1 record in 21 years as an NFL head coach). He’s been around the game for so long, coached a lot of great quarterbacks.

“He understands the game extremely well. He’s a great teacher of the game. He’s always motivated. He always worked hard. Great family guy. I love him as a person. I think of all the things that he can do as a playcaller. I think he’s a great leader of men. If he does get a great opportunity, I know he’ll be great at it. You want to root for him, for sure.

“That’s the problem with this game — sometimes you win, your team’s playing great and everybody’s scoring touchdowns and making plays, and you’ll lose some people you love sometimes.”

And sometimes you don’t play well, no one’s scoring touchdowns, you lose games and lose people you love anyway.

I have no reason to think Wilson was exaggerating about his respect and affection for Schottenheimer. So when he was ousted by coach Pete Carroll less than a month later — a day after the coach said he expected back all of his assistants — Wilson must have gasped at the gut-punch.

Schotty… I’m grateful for how much you meant to me over the past three years. God blessed me with you, we won a lot of games, threw a lot of touchdowns and had a blast in meetings and our bible studies. The best days are ahead for you. Go be Great. God first.

Five days after the firing, Wilson, on a Zoom call from his vacation in Mexico, was asked whether he was in favor of the move.

“You ask me am I in favor of it? No,” he said. He tried to minimize any resentment, but was plain that his friend was the fall guy for the 30-20 first-round loss to the Rams that concluded the seasonal backslide with Wilson’s worst playoff game — 11 for 27 for 174 yards and a pick-six.

Schottenheimer landed with Jacksonville as passing-game coordinator under OC Darrell Bevell, who was hired by new Jags coach Urban Meyer. Since Bevell was also fired by Carroll — in 2017, not long after another memorable home loss to the Rams, 42-7 — the Carroll Casualty Coaching Club has its co-founders in one town.

That first meeting of 4C must have had some stories.

Meanwhile, down the Gulf Coast in Tampa, Wilson attended the Super Bowl, in part to be feted as the 2020 winner of the NFL’s annual Walter Payton Man of the Year Award for his innumerable charitable works, only the second Seahawk so honored.

Bracketed by sympathetic interviews with national radio hosts Colin Cowherd and Dan Patrick, Wilson did a Zoom interview with writers about his award that veered quickly into commentary about the tensions between him and Carroll. Not only did he break his own custom of speaking only in platitudes, bromides and compliments, he broke Carroll’s No. 1 rule: Protect the team.

In the carefully planned media tour by his agent, Mark Rodgers, the polite but unmistakable criticism of the Seahawks’ pass protection (“I’m getting hit too much”), and his desire to be part of the personnel decision-making (“I think that’s something that is important to me’’) led him to toss his boulder into the still pond: “I’m not sure how long I will play in Seattle.”

Since he’s under contract through 2023 and isn’t pursuing more money, Wilson is using the leverage often, but not always, accorded great QBs, to gain something rarely shared in the NFL: Some control.

That’s the sort of thing that has appeal to anyone working for corporate overlords.

The strategy appears to have paid early dividends.

Lost in the attention given to Wilson’s laments was his effusive praise for Schottenheimer’s replacement, Shane Waldron, poached from the Rams and Sean McVay, Carroll’s coaching nemesis.

It sounds as if Wilson had some say in the decision. Either that, or he’s faking the football orgasm.

“I think Shane’s gonna be a great coach,” he said on Zoom. “I think he’s got great knowledge of the game. He’s a good person. He just has that kind of ‘it’ factor and wants to be great.

“We can’t talk ball (right now) really, just because of the rules. But I think he’s gonna be a great offensive coordinator. He’s got everything that you would want in terms of his knowledge of the game and his experience, especially being with Sean McVay, and all the great things they’ve done . . . He’s got some good stuff to him.”

So it would appear Carroll, who had no previous connection with Waldron, has made good with Wilson on the first hire.

Regarding the O-line criticism and risking the ire of teammates, management and some fans, the calculation is that if the pressure to make the bosses invest in pass pro pays off, no one is going to remember any hurt feelings.

From a perspective of optics, what Seahawks observer would argue against helping the most-sacked active QB in the NFL, especially one heading into his age-33 season and being paid $35 million?

Yes, we all know Wilson often holds the ball too long and invites self-sacks. But if Waldron brings Rams-style diversity and originality, the play calls will ease the pressure.

You probably know that Wilson’s 47 sacks were third-most in the NFL. The Rams QB coached by Waldron, Jared Goff, was sacked 23 times, and he’s not nearly the athlete Wilson is.

Goff’s 23 sacks were one more than Patrick Mahomes, two more than Tom Brady and three more than Aaron Rodgers. If Wilson drops down to the bottom of that statistical silo of royalty, the Seahawks will have something.

So the strategic play of Wilson’s off-season media strategy seems to be this:

Entering his 10th season of credible stellar play and off-field leadership, risk the temporary ill will caused by his uncharacteristic public criticism to prod management to deliver on his requests.

If the club resists and the team falters, then Wilson after the season can put on angel wings and say he tried everything, and must reluctantly ask for a trade to a team of his choice — he has a no-trade clause. Carroll and GM John Schneider will bear the pitchfork, tail and horns.

If they accede to some of his wishes and the team succeeds, nobody remembers the hooting and hollering in February.

If his comments on Waldron are accurate and sincere, it seems Wilson is 1-0 this off-season. If he’s feeling lucky, he should ask for a bigger say on fourth-down decisions.