Russell Wilson and Pete Carroll have different views on how to get the Seahawks to the pinnacle again. Wilson’s agent hasn’t asked for a trade, but he’s pushing trade partners. 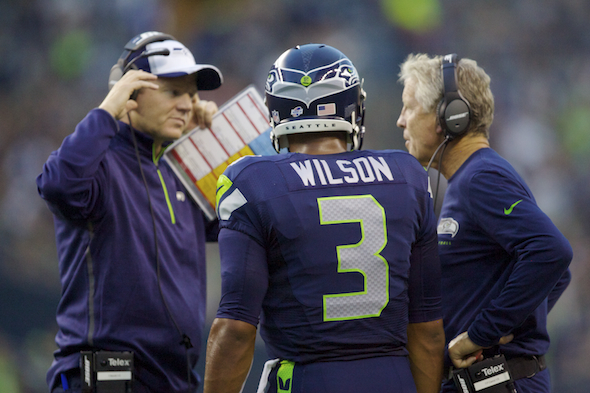 The staredown between Pete Carroll and Russell Wilson hasn’t changed, although The Athletic did a good a job Thursday explaining the history and context of the fraying that has captivated the NFL, and by extension, most of sports.

The pressure on the Seahawks, however, did go up a bit later Thursday. Wilson’s agent, Mark Rodgers, told ESPN’s Adam Schefter that, while no trade has been requested, there are now just four teams for which he would agree to waive his no-trade clause:

Russell Wilson has told the Seahawks he wants to play in Seattle but, if a trade were considered, the only teams he would go to are the Cowboys, Saints, Raiders and Bears, his agent Mark Rodgers said to ESPN.

There’s no reason to think that those teams are written in quick-dry concrete. Why would they be? Starting with the opening free agency in a couple of weeks, the other 27 teams begin re-making themselves for a season in which all will have nearly $20 million less to spend than the previous year, thanks to financial blows from the pandemic.

Teams can become more or less attractive to Wilson. And teams not on the list may make offers the Seahawks prefer. But team identities are less important right now to Wilson’s side than the playing of the card of limitations.

It is an attempt by Wilson to assert some control over the situation. The Seahawks and all teams hate surrendering any control.

In this case, Wilson’s media campaign continues to pressure the Seahawks, who don’t dare get into a public pissing match because they still want him as their starting QB in 2021 and beyond.

They particularly don’t want a trade right now, because a $39 million dead-money charge would be applied in full to their 2021 salary cap. However, NFL contract rules say that after June 1, that money (already paid to Wilson), can be accounted for over the remaining years of his contract (2021, 2022 and 2023) at $13 million per.

But June 1 is likely too late in 2021 for a quality re-build that would be necessary after the trade of the franchise icon, even with the relief provided by the absence of Wilson’s $32 million cap hit.

The permutations are so many regarding this pivotal juncture in Seahawks history that speculation is futile.

Yet how it reached cliff’s edge is becoming a little clearer. Based on what I’ve seen, heard and read, here’s my attempt at a single sentence to explain the crevasse between coach and player after so much success.

Staying in NFL contention bearing one of the largest contracts in history is difficult in the extreme when legacy becomes paramount in an age-33 quarterback, who believes his best chance to be the best ever requires both long-term health and a head coach with a shared view in game strategy regarding risk tolerance.

The most astonishing feat in Wilson’s likely Hall of Fame career is that he has never missed a game to injury. That is nearly unfathomable. Which doesn’t mean he hasn’t been hurt many times.

He’ll never tell. But someone did, indirectly.

The best on-the-record quote in The Athletic story came from former Seahawks RB Robert Turbin, a close friend and a groomsman at Wilson’s wedding.

Said Turbin: “The reason that we’re here is because he’s on pace to be the most sacked quarterback in the history of the NFL.”

Responsibility for the high rate has two parties. The offensive line during Carroll’s tenure is the unit that has had the least resources devoted to it, and Wilson hangs on to the ball longer than any quality QB. Parsing the percentages is irrelevant at this point, because Wilson said on his media tour that he’s tired of being hit so much. He said something must be done to improve pass protection.

His call, no matter whose feelings get hurt, because it’s his body that is getting hurt.

In retrospect, there was a game in 2020 that illustrated how things are changing for Wilson.

It was the first of the three games with the Rams, a 23-16 loss in LA Nov. 15. In the second quarter, Wilson threw a 22-yard pass toward TE Will Dissly that was intercepted in the end zone. The bad throw was compounded by Wilson’s failure to opt to run through a huge opening created by his rollout.

Wilson reluctantly agreed. But it sounded a bit as if he was being self-pitying.

“I should have ran it,’’ he said. “I think I’ve just got to get better. I’m not going to make it overly complicated. It’s not on anybody but me.”

Unless, of course, he’s grown weary of getting beat up by the Rams, and shying away from contact.

In that game, operating without injured RBs Chris Carson and Carlos Hyde, Wilson had a passer rating of 57 on 22-of-37 for 238 yards and two interceptions (he hit DK Metcalf twice in four targets for 28 yards).

Worst of all, Wilson was sacked six times and hit 12 times.

Donald didn’t record a single stat. Apparently nursing an injury, he played only 68 percent of the snaps, his lowest of the season. When he was in, he drew double-teams, opening lanes for teammates. When he wasn’t in, he was still in Wilson’s head. And Wilson was on his back, his worst game of the regular season. Donald was mostly a decoy.

During the next week, I was in touch with someone who had spoken to Wilson after the game. He had a one-word description for him: “Demoralized.”

That game also featured an episode that speaks to risk tolerance. This was about 4th-and-1, a subject that may demoralize Wilson in Seattle as much as pass/run ratio.

On Seattle’s first drive of the third quarter, Wilson’s third-down scramble left him inches short of a first down at the Seattle 39. After Carroll burned a timeout in a fruitless challenge of the spot, the offense stayed on the field while Wilson tried to draw off LA’s defense with a hard count. When that failed, Carroll called for a punt instead of going for it with the league’s highest-scoring offense.

Carroll defended the decision: “I don’t want to give them the ball at the 40 — if we don’t get it, that’s like a turnover, like you just handed them an interception. Let (punter Michael Dickson) kick the ball inside the 10-yard line and go play defense.

“It was too early in the game. I just felt like it wasn’t worth it.”

Dickson did his job, punting to the 12. The beleaguered defense didn’t. The Rams went 88 yards in 14 plays for their only points of the second half and a 23-13 lead.

“The players would love to go for it, and I know that and I’d love to go for it too,” he said.  “I have to work against my nature to go ahead and kick that ball right there. But I would probably do it the same way again.”

Wilson, going diplomatic on a hot Zoom mic: “You obviously want to get that opportunity to convert. It could go either way. I don’t think it was a bad decision.”

Yes, he did. Any good quarterback would want the chance, especially one who was operating atop the league.

It’s true that all coaches and QBs have disagreed over fourth-and-short since before Brady drew Bill Belichick’s first scowl, in the Jurassic period. But this is different now in Seattle. Two strong-willed, successful men with different football views have reached a crossroads. There is no Paul Allen to mediate.

The football world awaits a blink.