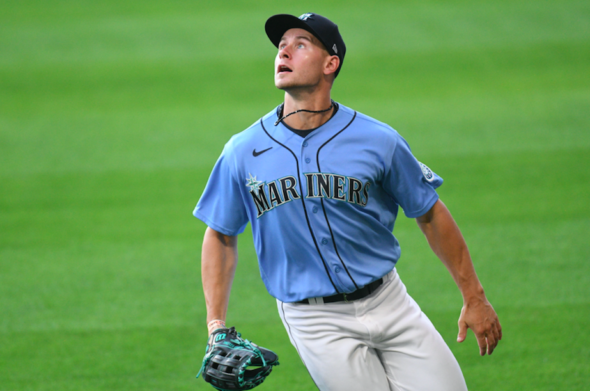 In a game obsessed by predictive analytics, it is sweet when randomness raises its goofy head and delivers a chef’s kiss.

In the fourth inning of a spring training game against the Chicago Cubs Wednesday, manager Scott Servais was answering a live-TV ESPN interview question in the dugout when the Mariners’ star-in-waiting, rookie Jarred Kelenic, was at the plate. He powered up the Mariners’ first exhibition home run, an opposite-field job, no less.

As with many sublime moments in life, timing was everything. Just as Servais finished answering the suddenly provocative question about when to call up rookies to the big club by saying, “Players will let you know when they’re ready,” Kelenic launched.

Apprised of his exquisite exclamation point to Servais’s observation, creating irony so strong it could bend light waves, Kelenic, on a Zoom conference, smiled.

As you may recall from the imbroglio created last week by Kevin Mather’s gaffe about deliberately slowing Kelenic’s progress to the majors, helping cost the Mariners president his job, player and club were thrown front and center into a national baseball maelstrom.

Mather spoke a truth that has never acknowledged by baseball executives, a self-pantsing that signals the commencement of towering fight between owners and the players union in negotiations for a new collective bargaining agreement after this season.

MLB announced that it was going to push back the start of the minor league season to the first week in May, ostensibly for health reasons.

If COVID-19’s declining rate of infection and the growing availability of vaccines eases the pandemic threat, chances improve in the summer to resume some normal routines and travel, as well as bringing back some fans to ballparks. Also, vaccinated prospects reduce the chance of spreading the virus upon call-ups.

The owners, who are planning on a full regular season starting April 1 — among more than 20,000 covid tests at spring training, only 20 were positive, according to MLB — also will re-institute from the 2020 stump season “alternate training sites,” or summer camp for bigger kids.

That’s where MLB stashed its top prospects when the minor leagues shut down. At Tacoma’s Cheney Stadium, the youngsters would cobble together a few innings every day against each other, then go home and jump around the lawn sprinklers until the phone buzzed from Seattle, needing to fill a roster spot.

He believed he was being punished for turning down an offer of a contract that gave the Mariners options to keep him beyond the six years of service time required to reach free agency.

Mather confirmed Kelenic and other top prospects would never be allowed to begin their service clocks in ’20, even if it meant putting “my big tummy” on the field, he said. Kelenic also wasn’t getting the development time inherent in serious competition.

So unless Kelenic has a killer spring and forces his way onto the 26-man major league roster  — the Mariners love to say that he has only 92 at-bats above Class A — a return to the T-Town gulag is in the cards.

Unless you ask Kelenic.

“Absolutely not,” he said. “I went through that all summer last year. I played extremely well all throughout the alternate site.

“But here’s the thing — it’s not sunshine or rainbows, whatsoever. It’s very hard to develop at all when it comes to an alternate site. It’s not real like games. You’re not playing against other competition.”

Other top prospects with the Mariners and across baseball are in potentially similar purgatory, but only in Seattle is the issue inflamed, thanks to Mather, and Kelenic’s return of fire. When general manager Jerry Dipoto tried to apologize for the organization at a team meeting, Kelenic told USA Today, “It was literally like someone farted in church. That is the exact expression on everybody’s face.”

When Kelenic followed that spoken bomb with the baseball kind Wednesday, Servais on his Zoom had a little zig-zaggy expression too.

“Yeah, I was doing the live interview and we have a nice rally going and Jarred did get a ball up in the wind that got out,” he said. “Again, we’ve got good young players. They’ve all got plenty to prove. The timing of what they do and when they do it is, uh, it’s interesting.

If ever a baseball team had a week in which to bold-face that bromide and bump it up to a 96-point headline, it was the Mariners.

Kelenic, 21, seemed to savor the moment, yet didn’t go full Mather lather and say something he shouldn’t.

“Something like this comes up and I think you can look at it one of two ways,” he said. “One, you can sit and pout about it, or you can use it as motivation, and let it drive me even more. That’s kind of where I’m at. Each and every day I’m letting this drive me.”

“At the end of the day, those are the cards that were dealt to me,” he said. “Hopefully this year, the dealer gives me different cards.”

By the look of his hand already, the Mariners shortly should fold, slide away from the table and call him the starting left fielder. If this is strip poker, the Mariners are almost down to boots.