As usual in free agency, the Seahawks are shopping at Costco while other NFL teams go to Gucci. Meanwhile, the Wilson saga takes a turn toward a New York state of mind. 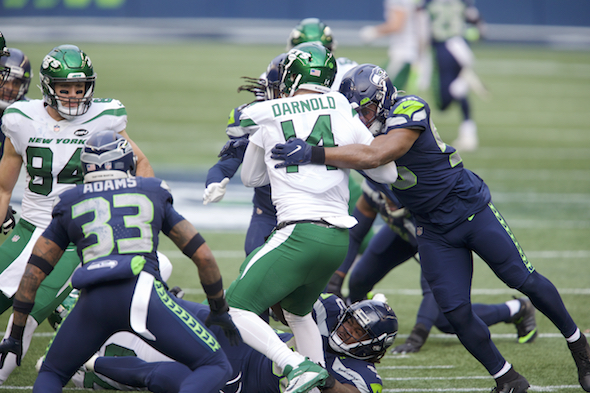 In a 40-3 loss to the Seahawks Dec. 13 at the Loo, Jets QB Sam Darnold got to know Seahawks DT Jarran Reed a bit. / Drew Sellers, Sportspress Northwest

Seems as if everyone these days is looking for a shot in the arm. But if Seahawks fans were looking for anything other than a COVID-19 vaccine Monday, they got nothing.

But at least the results maintained a tradition at this time of year as familiar as green beer: Seahawks fans lamenting, “Why can’t we have nice things?”

Former Packer Corey Linsley, a potential upgrade from free agent C Ethan Pocic, left Green Bay for the Los Angeles Chargers and a five-year deal worth up to $62.5 million. Good for him, and bad for Seahawks Twitterverse.

The #Seahawks should have been all over this… Perfect scheme fit. Fills an obvious need. He’s 100% worth that money. https://t.co/h85M7eLxtw

$4.5M year one cap hit for Thuney, so don’t think for a *second* that the Seahawks couldn’t have afforded him.

Linsley and Zeitler deals were extremely reasonable as well. https://t.co/Bg85z81kAh

A third lineman, Kevin Zeitler, formerly of the New York Giants and a teammate of Wilson’s at the University of Wisconsin, moved to help save Ravens QB Lamar Jackson for three years and $22 million.

As fans have learned, Pete Carroll and John Schneider rarely shop at Gucci when Costco has it all, plus $1.50 hot dogs.

To be honest, in the NFL, free agency for most teams is often an inefficient use of dollars under the salary cap. The potential is alluring, because for every expensive hire that succeeds, the B.J. Finney/Greg Olsen/Phillip Dorsett-style busts tend to be lost in the cloud of confetti.

But this year, matters for the Seahawks seem to have an urgency that feels like it should top logic. Primarily since Wilson made public demands for better pass protection, the popular knee-jerk response would to go top shelf for replacement help. And the Seahawks do have  vacancies at left guard with the retirement of Mike Iupati, and the free agency of Pocic.

Yet because needs are many besides the O-line — tight end, running back (free agent Carlos Hyde signed Monday with Jacksonville), No. 3 receiver, rush end and up to two starting cornerbacks, plus decisions on contract extensions for SS Jamal Adams, FS Quandre Diggs, re-hiring LB K.J. Wright, and paying DT Poona Ford $3.3 million — the $17.1 million space under the salary cap hardly is adequate.

So the Seahawks’ silence on the first day of free agency — contracts agreed to on Monday and Tuesday won’t be signed until the business start of the new season at 1 p.m. Wednesday — speaks to a longer game of filling roster holes. A middle class of free agent players over days and weeks figures to be more robust this time, because so many teams have to cut back payroll to fit under a shriveled cap.

Speaking of silence, intriguing news came Sunday in a report from NFL.com, the league’s house organ, that the Seahawks bosses have only listened to, and not negotiated with, teams bearing incense and myrrh seeking to trade for Wilson.

“No one I’ve spoken with has said that Seattle has actually engaged in any of these talks,” reporter Ian Rapoport said. “It is a long way from anything happening here.”

That sounds as if the free agency period is adjacent to, but not part of, the decision-making regarding Wilson’s future. Except that if the Seahawks want to restructure Wilson’s contract to gain more cap room, they need to activate that automatic feature before 1 p.m. Wednesday.

Perhaps they already have made other plans — with the New Jets.

Carroll was long gone from USC  by the time Darnold rolled through. His NFL career has been disappointing, the Jets moreso — one winning season and no playoffs in 10 years.  There’s a reason the Jets weren’t on the list four teams for which he would waive his no trade clause.

With three of Wilson’s four proposed trade destinations (Raiders, Saints and Cowboys) seemingly settled at quarterback, and with popular ex-Seahawks assistant Robert Saleh as the Jets’ new head coach, the prospect of a spectacular turnaround in the Big Apple would appeal to Wilson’s ego.

Based on Carroll’s remarks about Darnold in the run-up to the Jets game, the notion is less than outlandish.

“I think he’s really talented, without question,” Carroll said. “He’s got great throws in him. He’s a real quarterback. He sees things. He makes big plays and big throws in difficult situations because of his talent. It’s just a matter of time.

“Sam’s going to be a really big-time QB. He’s thrown a lot of balls in three years. He’s had a lot of experience. It will pay off in the long run.”

After that Dec. 13 game, it’s hard to imagine Darnold as a long-run answer. Then again, the same was said of Wilson in his rookie year, when he was 24. Darnold is 23.