The Mariners have some prodigious young outfield talents, but looks as if the first crack at the opening in left field will go to Taylor Trammell, 23, who’s had a good spring. 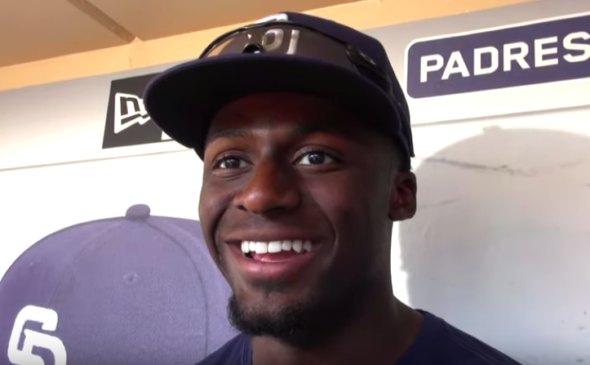 OF Taylor Trammell was acquired by the Mariners from the Padres in August. / Padres.com

As much as has been made about the the Mariners’ accumulation of top-tier prospects, it appears that only one position player will make his first major league start April 1 in T-Mobile Park. It won’t be either of the celebrated youngsters with superstar potential, Jarred Kelenic or Julio Rodriguez.

Based on spring training results so far, rookie Taylor Trammell, 23, seems destined to open in left field in a lineup that likely will include three 30-somethings (3B Kyle Seager, 33; RF Mitch Haniger, 30 and C Tom Murphy, 3o April 3).

Trammell is with his third organization, never making it beyond Class AA with Cincinnati or San Diego. But his big-league moment appears to be now with Seattle.

“The guy who has really stood out at this point has been Taylor Trammell,’’ general manager Jerry Dipoto said of his youngsters. “Taylor has been the most consistent. We’re seeing from him a level of maturity and preparedness. He’s a wonderful guy to be around.

“He’s had a really solid spring training. He’s got a pretty natural history in how he handles  righthanders and lefthanders. I think he’s played good defense, he can play all three (outfield) positions, which is a positive as we move into the season. He gives us a potential for a left-hand bat with a speed element. He’s trending in the right direction.’’

The Mariners acquired Trammell late August 2020. They dealt C Austin Nola and pitchers Dan Altavilla and Austin Adams to the Padres for four prospects led by Trammell. Absent  a minor league season because of the COVID-19 shutdown, the Mariners glimpsed him at spring training in Peoria, where he hit .375 in 14 games.

A muscular 6-foot-2, Trammell seems to have all the needed athleticism. What he needs are some stability and consistent playing time.

“I played with Cincinnati for three years,” he told 950 KJR radio. “I’m sitting there and found I got traded in mid-game, at the deadline. I was like, ‘Whoah! I thought I would be in Cincinnati for however long.’ I had no thoughts I would be traded. When I got moved to San Diego, I started to get settled down with the people I knew. Then I moved again.

“I love Seattle, I love the team and love the culture here and just everybody who is part of the organization.’’

“I’ve had really good at-bats,” he said. “It’s just having the consistency. That’s what I’m trying to hone in on.

“I’m an all-around player. I can hit a home run, and I can look at the defense when they’re playing back and lay one down. That’s what I really need to do.’’

The Mariners have had a hard time filling the left field spot consistently. Aside from Phil Bradley in the 1980s, and Raul Ibanez later on in two stints, anchor tenants have been rare.

With Kyle Lewis, the 2020 American League Rookie of the Year, a lock for center, and a healthy Haniger in right, the opening in left will have serious competition among Trammel, Kelenic, 21, and Rodriguez, 20.

It’s likely that Kelenic and Rodriguez will not make the opening day roster for reasons mostly due to service time. After spring training ends, they won’t see much action until the minor league season begins, which this year is delayed because of covid until the first week in May.

Trammell has earned his shot to start on one of MLB’s mystery teams. Because of the club’s history, he’s enjoying the notion that the Mariners are off the MLB national radar.

“Right now it’s like, we’re about to about to burst out on the scene,’’ he said. “We’re on the cusp of reaching our potential and reaching what we set out to do. The guys we have in our camp are creating a new culture, making sure that we’re all together.”

If all goes well the rest of camp, Trammell is set to get the the young outfielders’ first shot at reaching his potential.