New Seahawks OL Gabe Jackson was ejected last season for stomping on Ndamukong Suh. Is there a better way to introduce the new bodyguard for Russell Wilson? 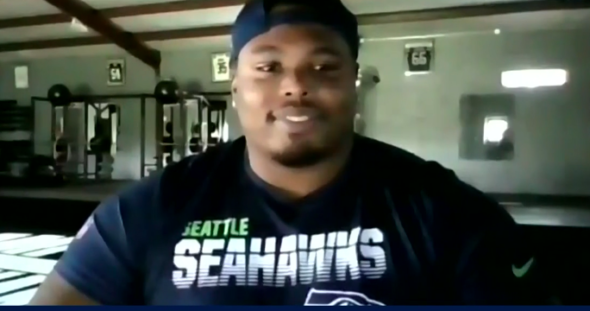 After complaining publicly in February about teammates for the first time in his career, Russell Wilson created franchise tumult. The Seahawks bosses were sent fluttering about like Vatican cardinals after the pope complained his soup was cold.

They found some hot soup.

Gabe Jackson is a sufficiently bad-ass offensive lineman to have stomped on Ndamukong Suh. Do you have any idea how long the line is behind Jackson of NFL players who wished they could have done that?

At the time playing right guard for the Las Vegas Raiders, Jackson was ejected from a week 7 game last season against Tampa Bay for an encounter with the Bucs’ notorious defensive lineman, the poster child for dirty play in the NFL.

On a goal-line play in the third quarter of the Bucs’ eventual 45-20 win, Jackson felt compelled to confront Suh’s beastliness.

“One of my teammates (OL Denzelle Good) is a great friend of mine,” Jackson told Seattle reporters on a Zoom conference Tuesday. “Even if he wasn’t a close friend, he’s my teammate, my brother, a person I go to battle with every week. I was protecting him. (Suh) was grabbing his leg, trying to twist it, and hurt it. So I was just a little outraged.”

Just a little outraged. Dunno if I’ve ever heard that phrase. But I like it.

“It was something that was dirty,” Jackson said. “I’m all about playing hard, playing physical between the whistles, but not to endanger someone’s career. Plus, he’s a great guy. I won’t let nothin’ bad happen to him.”

So Jackson stomped on Suh. Jackson was thrown out, and fined $12,500. Tuesday he was also chagrined about the reference.

“You had to bring up the Tampa game,” he said.

Oh, hell yes. If I were Jackson, I’d make a business card that reads, “I was just a little outraged . . . I won’t let nothin’ bad happen to him,” and hand it to Wilson.

That is exactly the attitude Wilson was seeking from his public scold. As most Seahawks fans can recall readily these days from his citation, Wilson has been sacked 394 times, surely a Hall of Fame number at Safeway already.

The Seahawks were sufficiently eager for Jackson, who started 83 of 84 career games for the Raiders at either left or right guard since he was taken in the third round from Mississippi State in the 2014 draft, that they gave up in trade precious cargo — a fifth-round choice, or 25 percent of their draft stock. Then again, with the way the Seahawks have drafted lately, it may have been a sleeves-off-a-vest kind of deal.

Wilson indicated to Jackson he was appreciative. For readers of Wilsonian tea leaves this off-season, the gesture bodes well.

“He was excited,” Jackson reported. ” I don’t know if he was as excited as me, but we’re both excited to work together.”

The excitement also filtered into the salary cap office. News came Tuesday of an extension for Jackson’s seemingly onerous contract that called for $9.6 million this year and $9.5 million next year. By adding a third year, the cap hit for 2021 was reduced to about $4 million.

Along with the trade, the #Seahawks gave G Gabe Jackson a 3-year, $22.575M extension, source said, which includes a $9M signing bonus. Jackson gets $7.075M in additional guarantees. A nice payday from his new team.

Although it seems likely Jackson will replace the retired Mike Iupati on the left side, the Seahawks could shift rookie star Damien Lewis there. Jackson said it doesn’t matter.

“You always have to get used to whatever side you’re on,’’ he said. “It’s a switch-up, of course, of your body, to adjust and learn ways of movement. Whatever the team wants me to do, I’m for it.’’

One outside observer, former NFL O-lineman and now Sirius XM Radio host Geoff Schwartz, figures the upgrade will be noteworthy from the oft-injured Iupati, 33.

“Mike was getting up there in age and wasn’t moving as well,” Schwartz said on an NBC Sports Northwest podcast with Joe Fann. “Gabe will be able to do those things a lot better. You hope that he also can come in and mentor Lewis.

“He is just a solid guard. He’s maybe past the days of being physically superior, which he’d been for quite a few years. He was dominating guys when he was young, and maybe he can get back to that in Seattle. He’s a good, quality guard who is very reliable. You know what you’re getting from him.”

From a standpoint of satisfying Wilson’s desire for a little more safety, Jackson figures to be the lone personnel upgrade. The other four linemen from 2020 — Lewis, LT Duane Brown, RT Brandon Shell and C Ethan Pocic — all return, although Pocic’s $1.3 million salary doesn’t preclude adding a more established center.

The rest of the improvement has to come from the scheme of new offensive coordinator Shane Waldron, as well as persuading Wilson that there’s plenty of yards, wins and glory in the quick passing game.

No matter the emotional satisfaction, reliance on Jackson’s willingness to stomp on Wilson’s tormentors risks fouling out.