Thiel: With Mariners, it’s all about gradualness 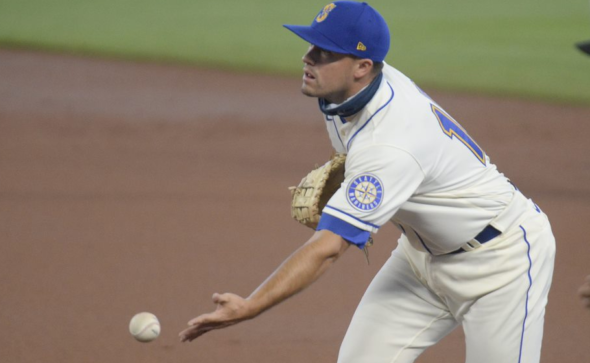 Superb in the field, 1B Evan White needs a breakthrough at the plate. / Alan Chitlik, Sportspress Northwest

The overdone ritual of baseball’s Opening Day is often more about the return of decent weather than it is a chance see players cavort, spit and overthrow the cutoff man. This year, however, is different.

The regular-season openers Thursday across the fruited plain, including one at Seattle’s T-ball Park (San Francisco, 7:10 p.m., Root), feature the return of fans, who spent all of 2020 hiding from airborne cooties. Tra-la, tra-la.

More accurately, it is the return of some fans. The lingering cooties factor will limit crowd sizes everywhere. Well, everywhere but Texas (Motto: Don’t Mask in Texas), where the Rangers expect to host a sellout super-spreader event Monday with the Toronto Blue Jays. The club’s decision irked President Biden, who told ESPN Wednesday that the club’s decision was “not responsible,” certainly a rare description when it comes to Texans and governance.

In Seattle, seating is capped at 9,000, public-health officials here being what they are — stern. Thankfully. That’s the figure for the foreseeable, because we favor the gradual approach.

And if you are among those who like gradual, does Seattle have a ball team for you — the Mariners.

A powerhouse of gradualness, the Mariners continue their carefully calibrated step-back program by featuring mostly the same lineup as the one that executed the stump season of 2020 at 27-33.

Returning to their same starting spots are 1B Evan White, SS J.P. Crawford, 3B Kyle Seager and C Tom Murphy, the latter booked to start 2020 but missed the season with a broken foot bone.

Kyle Lewis, the American League rookie of the year, would be in center except for a bone bruise in a knee that put him on the 10-day injured list. His place is taken by the only new face in the lineup, Taylor Trammell, making his major league debut at 23.

Utility guy Dylan Moore, who hit .255 with eight homers in 38 games last year, replaces Shed Long at second base, and Ty France replaces Dan Vogelbach at DH. Left field could have either Jose Marmelejos, who started Opening Day a year ago, or Jake Fraley.

In right field is a newbie/oldie, Mitch Haniger, who at 30, has endured nearly two years of injuries and surgeries to reclaim his spot and career. If he pulls it off, he will be the next Captain America.

“It’s going to be exciting and fun,” the stoic Haniger told the Seattle Times at spring training. “I’m sure there will be a lot of emotions.” For him, emotions may be a fascinating experience.

Another newbie/oldie is James Paxton, 33, in the six-man starting rotation. He returns to Seattle and joins newbie Chris Flexen, who pitched last season in Korea. Repeating from 2020 are Thursday’s starter, Marco Gonzales, and Yusei Kikuchi, Justus Sheffield and Justin Dunn.

With the possible exception of closer Rafael Montero, the bullpen could be any of seven men in line behind you in the pop-up vaccination clinic. Same as last year, only no vaccines then.

The point here is that the Mariners are much as they were last year, with probable upticks with Paxton, Haniger, Murphy, Moore and France. But if Paxton and Haniger play well, the Mariners likely will deal them to contenders for prospects at the trade deadline. So the club is still in that mode of outsider looking in at the party.

Of course, any of the returnees are capable of noteworthy improvement.

In that regard, the biggest difference-maker needs to be White, not only because he was the worst lineup regular in 2020. A better year would validate the talent evaluation skills of general manager Jerry Dipoto, which are about to come under more scrutiny as the gradualness moves on slowly to . . . whatever.

Before White played a major league game, it was Dipoto’s idea to sign him to a deal for six years and $24 million guaranteed, while White agreed to sign away all of his arbitration years and up to three free-agent years. That meant college draftee White, 25 on April 26, would be 30 when he reaches free agency, which is considered a little late, should his performance mandate big money. A comprehensive explainer can be found here by Tom Verducci of Sports Illustrated.

A similar sort of deal was reportedly offered to Mariners’ superstar-in-the-bud Jarred Kelenic, to which he responded with an oh-hell-no chortle. That led to the service-time delays that now-former club president Kevin Mather articulated to the world in what turned out to be his exit interview.

White responded in 2020 with a defensive performance that won him a Gold Glove, but at the plate delivered a .176/.252/.346 slash line and a 41.6 percent strikeout rate that was a full Mike Zunino.

As we know, the jump from Class AA to the majors is a high one. Although spring training numbers are often dubious, White did improve last month to .222/.296/.400, and 10 strikeouts in 54 plate appearances.

Asked about what White needed to accomplish this season, manager Scott Servais not only dismissed any any intended criticism, he gushed about the upside.

“He’s in a different head space right now than I’ve ever seen him,” Servais said on a Zoom conference Wednesday from the ballpark ahead of a club workout. “He’s not just trying to survive — do I belong? — he knows he belongs. I think he’s taking an ownership in his career. We’ve seen a difference in him over the last month or so, and I’m anxious to see how it plays out.

“Evan did have a good spring. He’s certainly learned a lot last year, going through the first time, and how it can speed up on you. He has to understand you don’t have to say yes all the time, or be a pleaser all the time. You need to do what’s best for you. It’s maturing, starting to take control. His confidence is at an all-time high for him at this level.”

If White’s purported confidence turns into quality production at the plate, the Mariners’  penchant for gradualness may give way to some acceleration. The doughty 9,000 in the house may start to feel a breeze, although it could be from Dipoto waving White around the bases.