Thiel: Mariners opener was walk on the wild side

The return of fans seemed to be the lone Seattle highlight. Then excitable rookie Taylor Trammell went stone cold to lead the biggest opening-game comeback in club history. 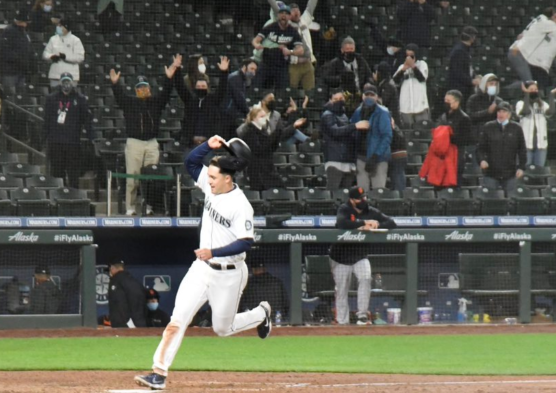 A walk-off walk forced in Evan White with the winning run Thursday in the Mariners’ first game in front of fans since 2019. / Alan Chitlik, Sportspress Northwest

In the hours prior to making his major league debut for the Mariners on opening night in center field, Taylor Trammell, 23, was all twisted up and turned out.

“I woke up a wreck,” he said. “Guys are talking to me saying, it’s just like any other game. But you know, the first day is what we dreamed about ever since you were a kid.”

During the club’s always superb pre-game video presentations for big events, Taylor admitted getting choked up at the memorial segment saluting the numerous MLB stars who died over the past year.

Then there were the fans. Real people, not cardboard replicas, eager to express how much the players had been missed over the previous 550 days.

“I was really emotional today, just because we got the fans back,” Trammell said.
“That was awesome for me.”

Amped beyond 11, Trammell figured to be no match the evening’s big moments. Instead, he owned them.

According to manager Scott Servais, the critical moment in the greatest opening night comeback in franchise history, an 8-7, 10-inning absurdity over San Francisco, was a walk by Trammell.

Get used to hearing this season about killer walks. It’s what these guys do best.

After trailing 5-0 and 6-1, the Mariners scored six runs in the eighth inning using two singles, a double, three walks, a hit batter and a mammoth throwing error by Giants first baseman Brandon Belt. The mistake thwarted an inning-ending double play and sent the tidy gathering of 8,174 — all masked up and scattered distantly in the seemingly cavernous T-ball Park — into spasms of delight.

One walk was a nine-pitch molar grinder that epitomized the Mariners’ mantra about controlling the strike zone.

“If the game could be summarized in one at-bat tonight, it was probably Taylor’s nine-pitch walk in the bottom of the eighth against really tough lefty (Jarlin Garcia),” Servais said. “He played off some good sliders ended up drawing a walk. It’s crazy how that one at-bat was really pivotal. And for a guy making his major league debut, he was about as cool as the other side of the pillow.”

Trammell did his cool-pillow thing again in the 10th.

After new closer Rafael Montero offered up a buzz-killing solo home run to SF pinch-hitter Alex Dickerson in the ninth to tie the game at seven, the Mariners in the 10th exploited the goofy runner-at-second-base-in-extra-innings stunt MLB started in the 2020 stump season.

With Evan White at second, Giants reliever Jose Alvarez walked three consecutive batters — Trammell, 2B Dylan Moore and LF Jake Fraley — to force in White with the most galling of baseball denouements, the walk-off walk.

Fraley was on base four times — three walks and hit by pitch. While Yankees slugger Aaron Judge may win games majestically, the Mariners to seek to win annoyingly. The W’s are marked with no style points.

“it was great to see,” Servais said of the nine walks after the Mariners led the Cactus League in free passes. “We had some awesome at-bats by some young players. It’s kind of what we’re about — control on the zone and dominate the strikes.”

The late effort bailed out an early failure by pitching ace Marco Gonzales, who gave up three homers, five hits and five earned runs in six innings. A guy who has been the rock in the organization’s agonizing step-back wasn’t close to his usual self,

“I’ll be lying if I said I didn’t have some extra emotions on opening day,” he said. “It doesn’t ever get old — one of the best days of the year. Certainly something I don’t take for granted. I felt did it take me out of my game a little bit, to do a little too much.

“Having having my family here, and having the fans here, was just something I’ve missed a lot. We’ve all missed it. We’ve talked about it throughout the day. It’s a very special day.”

He was no match for Giants starter Kevin Gausman, who allowed two hits and no runs in 6.2 innings.

By the seventh inning, it seemed as if a rousing version of Take Me Out to the Ballgame, among the most sincere ever sung, would be the most sustained emotion of the night.

Then Trammell lowered his heart rate to near zero in order to spike everyone else’s. 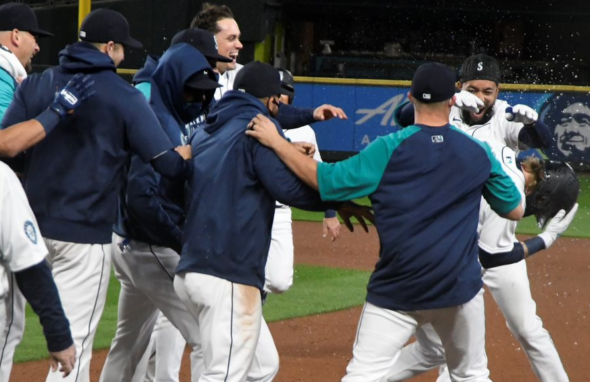 After his walk-off walk, Jake Fraley was the object of his teammates’ affection. / Alan Chitlik, Sportspress Northwest