In the second inning of the first start in his return to Seattle, James Paxton had to come out after a forearm strain, making a 10-4 loss to the White Sox far worse. 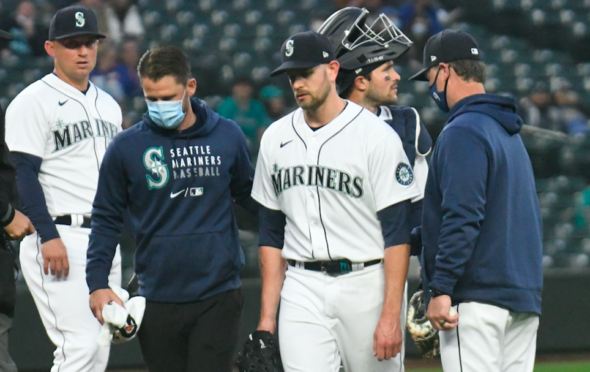 James Paxton had to leave his first start of the season in the second inning with a forearm strain. / Alan Chitlik, Sportspress Northwest

First outing of the season? In the second inning? Are you kidding?

Returning to the Mariners after a two-year stint with the Yankees shortened by injury, Paxton was forced out of Tuesday night’s 10-4 home loss to the Chicago White Sox by a left forearm strain. Manager Scott Servais said after the game that Paxton would have an MRI scan Wednesday morning to determine the severity.

“It’s so disappointing,” Servais said. “I know for Pax, and for all of us. We were really looking forward to getting him back and being a very good part of our rotation.”

Wednesday update: Paxton was placed on the 10-day injured list with a left forearm strain. Ljay Newsome, 24, was called up from the alternate site in Tacoma.

Paxton had a 1-2-3 first inning and faced two batters in the second, then was removed after 24 pitches, including 15 strikes. He was in obvious discomfort over his last several pitches, wandering off the mound and attempting to stretch the forearm by hooking his thumb into his belt.

“Having seen him so much over the years, you know right away,” Servais said. “You know something’s not right. He felt something in his forearm and at that point, the night is over. Just shut it down and see what the doctors have to say.”

After impressing GM Jerry Dipoto in off-season workouts, Paxton, 32, signed this spring a one-year, free-agent contract for $8.5 million to rejoin the team that drafted him out of Ladner, B.C., and developed him into a solid big-league pitcher.

The Mariners were careful with him in spring training, giving him just two regular Cactus League starts. In 8.1 innings, he had 17 strikeouts, proving the velocity drop he had as a result of numerous injuries last season was no longer an issue.

Paxton was part of Dipoto’s step-back plan after the 2018 season that included trading expensive veterans for prospects. He was dealt to the Yankees for three prospects, including pitcher Justus Sheffield, now a rotation regular.

His first year in New York was a success, making a career-high 29 starts with a 15-6 record and 3.82 ERA. But back surgery in February delayed his 2020 return until mid-season.

In five starts, Paxton struggled with a 6.64 ERA, 26 strikeouts and seven walks in 20.1 innings before going down with a flexor tendon injury in the forearm. He said after the injury that the forearm workload developed because his legs weren’t strong enough following the back surgery.

By December, he was throwing for scouts in workouts and hitting 94 mph with his fastball. The Mariners took a chance on his health, and all signs in spring were good, although he was pushed back from the rotation’s No. 2 spot to fifth to provide more rest.

In a video conference before the game Monday, he said, “I’m really excited. I can’t wait to get out there tomorrow night.”

Additionally, LF Jake Fraley had to leave the game in the fifth inning with a left hamstring strain after making a sliding catch a ball sinking in front of him. Servais said Fraley will have an MRI as well. The Mariners will call up two players from the alternate training site in Tacoma for the 1:10 p.m. Wednesday against the White Sox.

Wednesday update: Fraley was placed on the 10-day injured list with a left hamstring strain. OF Braden Bishop, 27, was called up from the alternate site.

Speaking to reporters via video conference, Paxton said, “It just got worse and worse, and it got to a point where I wasn’t able to throw pitches.The flexor strain before, there was a lot more pain than there is right now.

“So I’m feeling pretty optimistic that this could be a pretty quick thing. Obviously, I don’t know much right now. We’re getting some imaging done, and we’ll know more in the coming days.”