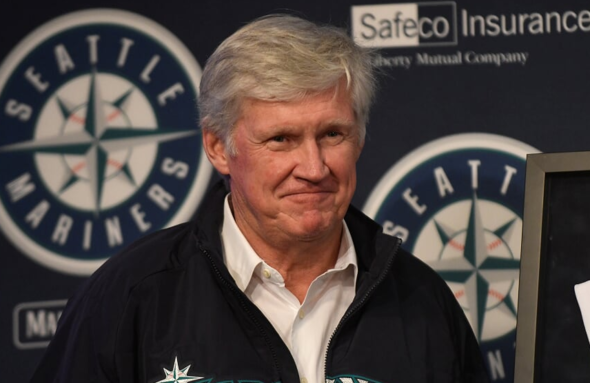 Where would the Mariners be this week if chairman John Stanton had fired Kevin Mather in 2018?  That's when it became publicly known the club was sued by three female employees, two of whom accused the club president of sexual harassment, and accepted financial settlements.

The players would be at Arizona spring training playing and talking ball, not hearing things like this from staff ace Marco Gonzales: 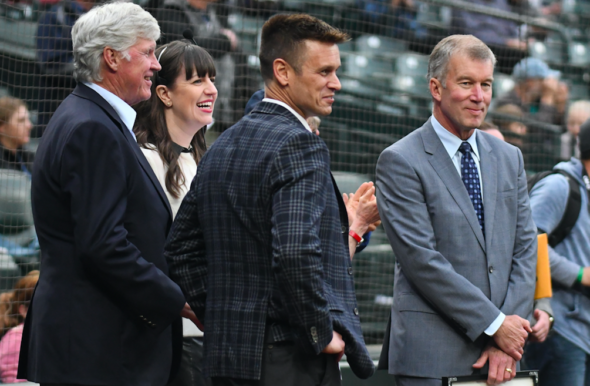 In 1987, George Argyros tried to buy the San Diego Padres while owning the Seattle Mariners. The shocking stunt broke every ownership rule, custom and norm in MLB. Even his close friend, Commissioner Peter Ueberroth, felt compelled to fine his pal, a California real estate developer who bought the club in 1981, $10,000 for calling the Padres manager, a violation of the rules against tampering with other teams. 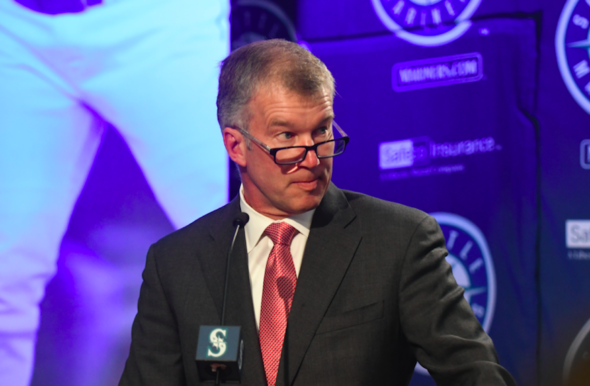 If arrogant swagger is a valuable part of a sports championship team, Kevin Mather is more than ready to do his part.

The Mariners' seldom-heard-from president told the Bellevue Breakfast Rotary Club Feb. 5 that after the club wins a World Series, it will stage a celebration in downtown Seattle that will make the Seahawks 2014 Super Bowl version "look like a neighborhood Fourth of July parade. We're gonna do it right. I'm looking forward to delivering with that.

"I think we're on the verge of something special." 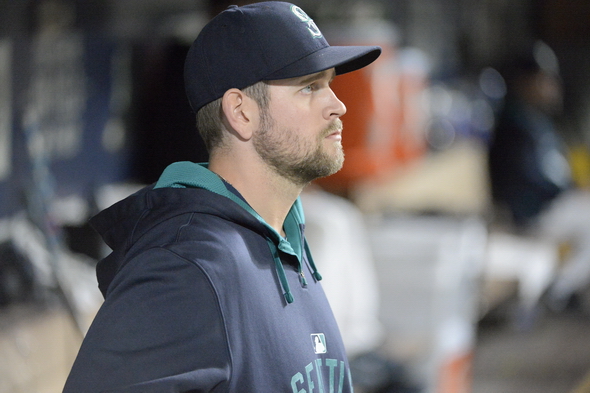 Infinity, by any definition, is a mysterious concept. Perhaps the only way for a non-mathematician to appreciate endlessness or boundlessness is to use an alternative term more understandable.

I suggest Marinerness -- a time/space quality of being everywhere, but nowhere.

As Seattle fans this month enter their 44th year of the experience of baseball infinity, I doubt further explanation is necessary. 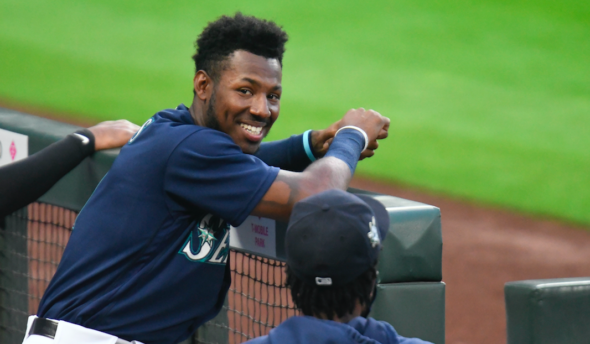 Everyone agrees -- Kyle Lewis was the American League's Rookie of the Year. Unanimously. Nice to find something these days that all can agree on, even it was a 60-game season.

All 30 voters from the Baseball Writers Association of America said he deserved the Jackie Robinson Award. He's the the 12th to run the table, and first for the Mariners. White Sox CF Luis Robert came in second with 27 second-place votes and Astros pitcher Cristian Javier was third with 11 third-place votes. 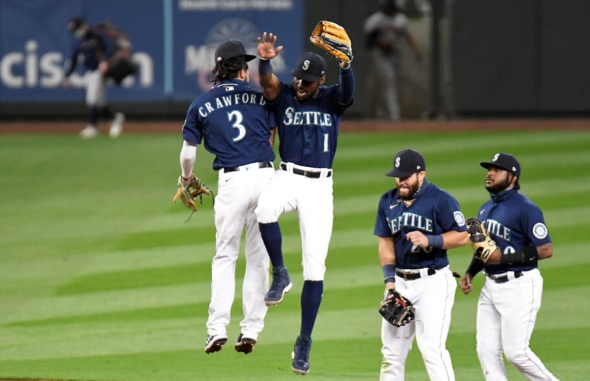 From 30,000 feet, the Mariners appear as they almost always have: No playoffs in 20 years, no World Series appearance ever, still living on The Double by Edgar Martinez -- an entire generation grown to adulthood without seeing it live, yet endlessly on the broadcasts. 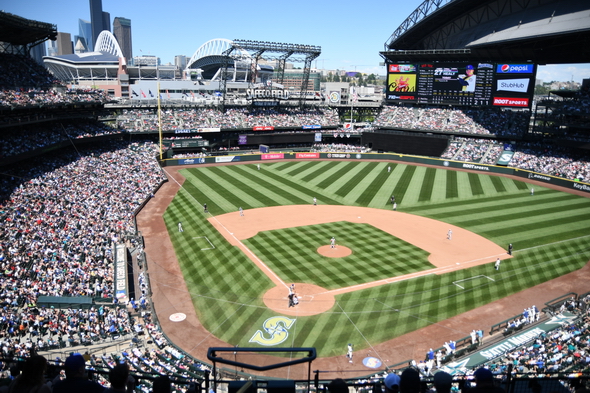 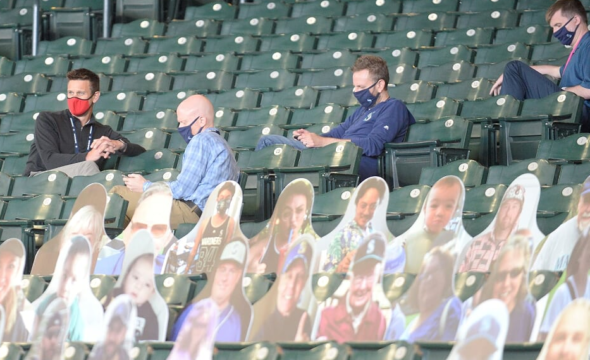 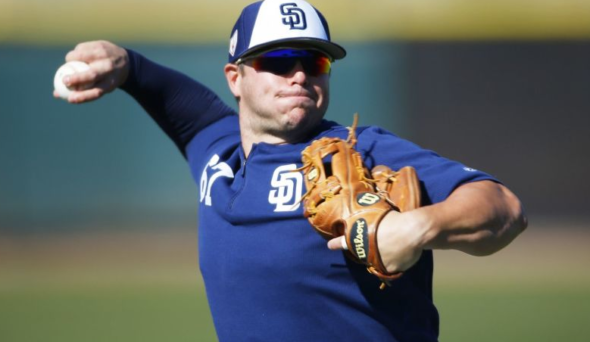 Update: The Mariners' home games Tuesday and Wednesday against Oakland have been postponed to allow for more testing following a positive test among the A's while in Houston. Makeup dates have yet to be released.

In a bid to get younger, baseball's youngest team, the Seattle Mariners, Sunday night swapped three veterans 27 or older -- C Austin Nola, 30, and relief pitchers Austin Adams, 28, who hasn't pitched in 11 months, Dan Altavilla, 27, who has pitched poorly -- for four prospects 26 or under from San Diego. 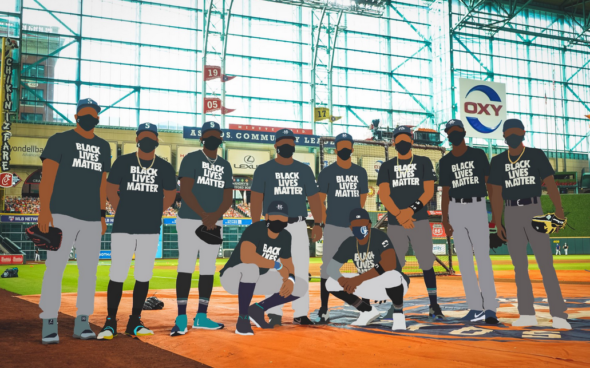 The Seahawks staged a mock game Wednesday at the otherwise-empty Clink, which was football-useful but utterly irrelevant culturally. Another unarmed Black man in America had been gunned down by police, this time in Kenosha, WI. The Seahawks joined others in the sports world furious about another atrocity -- Jacob Blake, 29, was shot seven times in the back, in front of his three children. 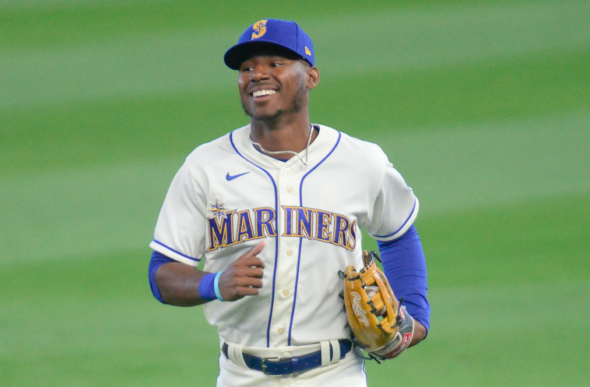 The temptation is strong to see rookie outfielder Kyle Lewis, 25, as the Mariners' successor to Edgar Martinez or Ken Griffey Jr. As longtime broadcaster Rick Rizzs said during one of Lewis's at-bats Sunday, “He is Mr. Everything.’’ 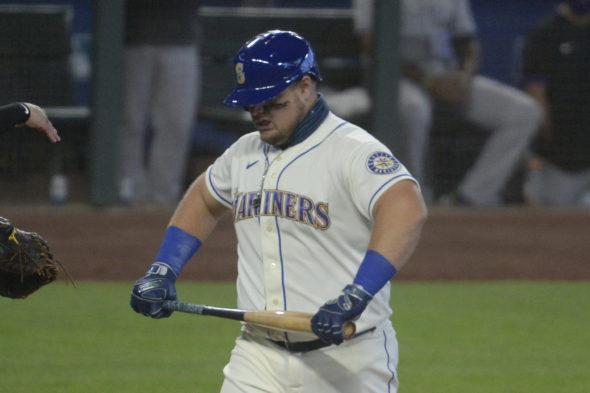 Since studhoss Clayton Kershaw was pitching for the Los Angeles Dodgers Thursday, it seemed like a good time to head to T-ball Park for a couple of temperature checks, answer some questions about my health, and to see what condition the Mariners were in, especially since this weekend marks the seasonal midpoint in VirusWorldBall. 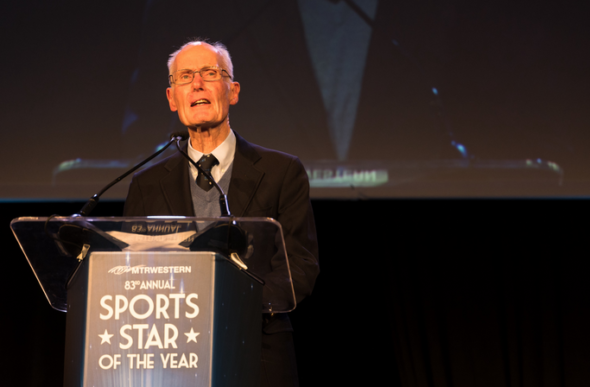 Woeful as the Mariners are in this stubby season, woeful as they traditionally have been, they have met the standard to be termed a civic asset: Many people care.

While it's also true that many people cared about the old Dog House restaurant in Belltown ("tenderness not guaranteed" was printed right on the menu, winning me over), no one was there to save that epicurean monument to gravy as a meal-repair tool. 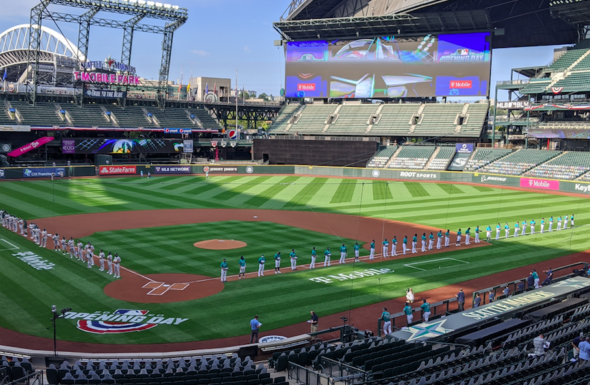 John Fogerty's Centerfield is as ubiquitous and celebratory a song as there is in the audio armory of sports-venue music. It was the first thing up Friday on T-Mobile Park's video screen as the Mariners tried to navigate a home-opening "ceremony" in the bizarro-world of operating big-league sports in the middle of a bigger-league global catastrophe. 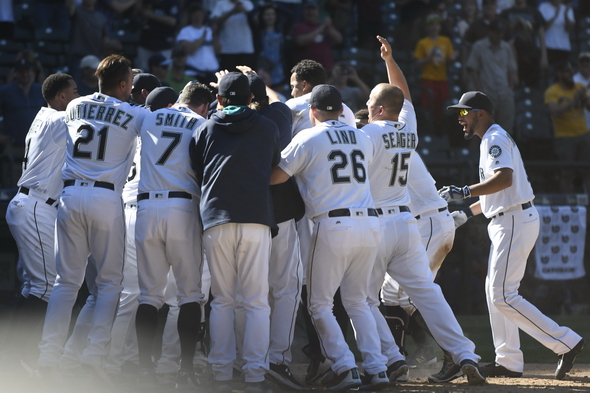 If you've watched some telecasts of games in MLB's stubby start-up season, you may have seen something you didn't expect.  High-fives. Hugs. Spitting. Close contact.

You know, like it was in the before days, when baseball players celebrated all over each other as if style points were available whenever a teammate did something more than foul a ball off his instep. 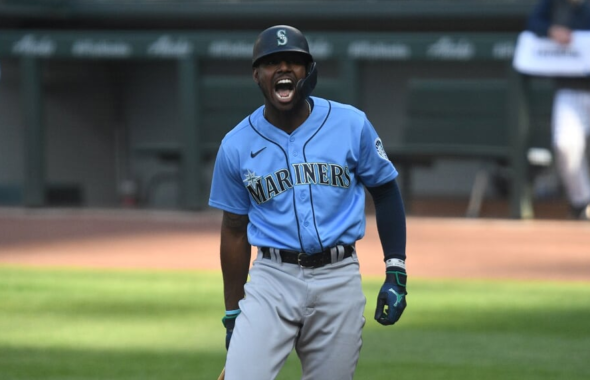 Before the opening game of the 2020 irregular season Friday in Houston, Scott Servais sounded more like he was at the end of something instead of the beginning.

"I wasn't sure," the Mariners manager said, "we'd ever get here."

The major league baseball season, in jeopardy since mid-March not only by a pandemic but by the industry's penchant to self-destruct over money, finally lurched to its feet this week. But the degree of difficulty left Servais a little drawn. 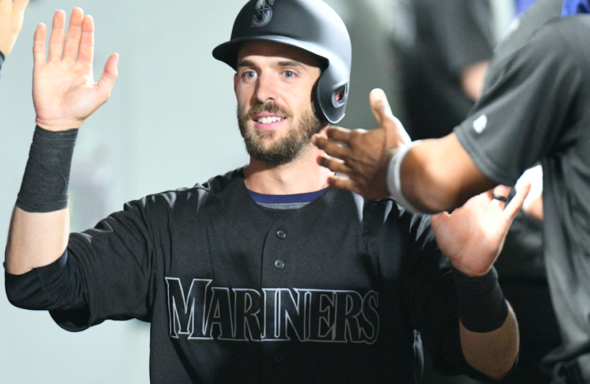 Much has been said about the pending weirdness of a Major League Baseball season missing 102 games and devoid of spectators, yet filled with nearly as many hygiene rules as a hospital surgery unit.

All true. But in the before days (pre-pandemic), does anyone remember 2019? 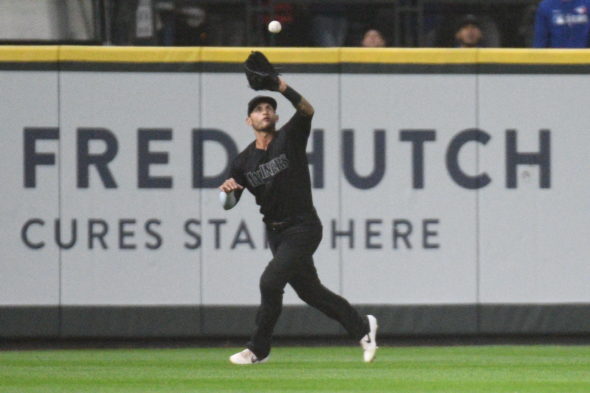 One of the more intriguing Mariners personnel developments in 2020 is that the likely lineup for the regular-season opener Friday in Houston will include rookie Seattle draftees at three positions.

You may have known that 1B Evan White, 24, and CF Kyle Lewis, 25 last week, were high draft picks who came with high expectations. But Tim Lopes in left field? 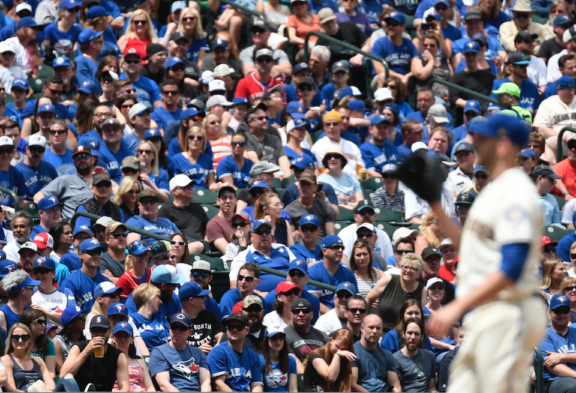 From a summer sports perspective, about the only sliver of virtue accruing from the coronavirus shutdown is that Seattle would be spared the onslaught of Canadian fans pouring in for the annual visit of the Toronto Blue Jays. Besides cheering for the national team, they had a secondary goal of rendering inert all those stereotypes of Canadians being polite, courteous and deferential. 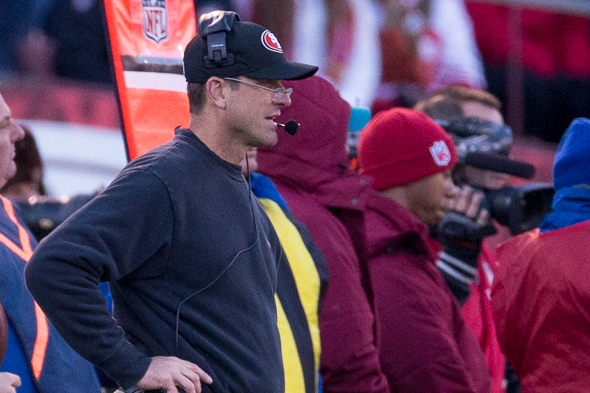 The coronavirus, always in the lead, is beginning to put distance between its relentless self and the local and national sports sensibilities.

The highlight event of the Seattle sports calendar in September, the visit of the Michigan Wolverines and coach Jim Harbaugh to Husky Stadium for a season-opening game Sept. 5 against Washington, was cancelled Thursday.